Liverpool and Scotland legend Kenny Dalglish has been knighted in the Queen's Birthday Honours list.

The 67-year-old, who won the European Cup three times while playing for the Reds and later managed the club, said he was "humbled but gratified".

He was also recognised for supporting Hillsborough victims and his charity work with the Marina Dalglish Appeal.

"I thought it was a tax bill," Dalglish told BBC Radio Merseyside. "For the family, it's a huge honour."

Dalglish, who started his career at Celtic, is Scotland's most-capped player, having made 102 appearances for his country.

He said: "It won't make any difference to me, I'll just maybe need to change my passport!

"But just because we're a wee bit embarrassed about it doesn't underestimate how pleased and proud we are to have received it.

"I hope everyone who came into our lives enjoys it as well."

Dalglish is the only sporting figure knighted in the Queen's Birthday Honours list.

From 'King Kenny' to 'Sir Kenny'

Born in the east end of Glasgow and the son of an engineer, Dalglish made his Celtic debut in 1968. He won four Scottish league titles and four Scottish Cups before joining Liverpool in 1977.

In his first season at Anfield he scored the only goal in the 1978 European Cup final, and also lifted the trophy in 1981 and 1984.

He became player-manager in 1985, and was on the touchline for their ill-fated FA Cup semi-final against Nottingham Forest at Hillsborough on 15 April 1989.

Ninety-six Liverpool fans died as a result of a crush in the away end of the ground.

Dalglish helped support the bereaved families and made sure the club was represented at the funerals of all 96 victims, attending many himself.

Having won three titles as Liverpool manager, he left in 1991, leading Blackburn to the Premier League title four years later. He also managed Newcastle and Celtic, and had a second spell as Liverpool boss from 2011-2012.

After his wife Marina recovered from breast cancer, they set up the Marina Dalglish Appeal in 2005, and the charity has raised more than £10m.

In 2011, relatives of the Hillsborough victims called for a man they call 'King Kenny' to be knighted. Their wish has been granted.

Former Tottenham and West Ham striker Defoe, who has played 57 times for England, has been honoured for his work with the charitable foundation he established in 2013.

The foundation supports homeless, vulnerable and abused children in St Lucia - where his grandparents were born - and has expanded to work elsewhere in the Caribbean and in the UK.

While playing for Sunderland between 2015 and 2017, the London-born 35-year-old befriended terminally ill fan Bradley Lowery, who died aged six in July 2017.

Defoe dedicated the honour to Bradley in a message on social media. 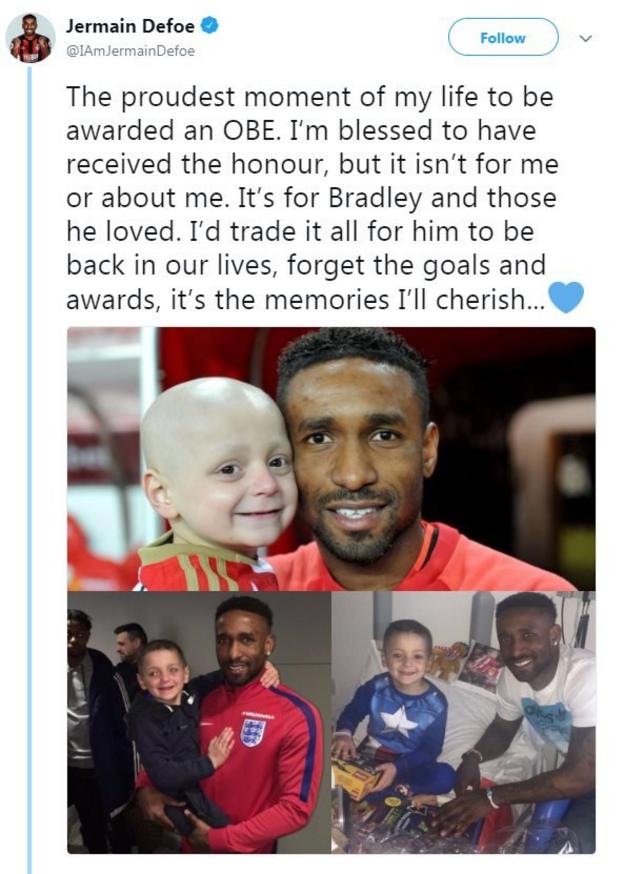 Boxer Joshua is also made an OBE, three months after beating Joseph Parker to maintain his bid to unify the world heavyweight titles.

The 28-year-old from Watford was made an MBE in the 2013 New Year Honours, after winning Olympic gold at London 2012.

Yarnold, too, has now been made both an OBE and MBE.

The 29-year-old from Kent became the first Briton to successfully defend a Winter Olympics title when she won gold at the Pyeongchang Games in February.

Bill Sweeney, chief executive of the British Olympic Association, said: "Lizzy Yarnold and Anthony Joshua are great examples of athletes that were able to fulfil not only their Olympic ambitions, but give so much back to their communities and country."

Elsewhere, former world curling champion Mike Hay has been made an OBE.

Team GB's chef de mission at both the 2014 and 2018 Winter Olympics, the Scot was made an MBE after coaching Britain's women's curling team to Olympic gold in 2002.

Sir Craig Reedie, the Scottish president of the World Anti-Doping Agency who was knighted in 2005, has become a knight grand cross.

Kenny Dalglish MBE, for services to football, charity and the city of Liverpool.

Knight Grand Cross of the Order of the British Empire (GBE)

Officers of the Order of the British Empire (OBE)

Richard Leman, for services to hockey.

Roisin Wood (Kick It Out chief executive), for services to tackling discrimination and exclusion in football.

Members of the Order of the British Empire (MBE)

Steve Elworthy (former England and Wales Cricket Board director of events), for services to cricket.

Jess Fishlock (footballer), for services to women's football and the LGBT community.

Alex Jackson, for services to cross country running in Scotland.

Kirsty Letton, for services to curling.

Diane Modahl (founder of Diane Modahl Sports Foundation), for services to sport and to young people in north west England.

Dai Morris, for services to rugby in Wales.

William Fox-Pitt, for services to equestrian.

Sue Redfern, for services to women's cricket in the UK and abroad.