New Arsenal head coach Unai Emery was the "unanimous" choice to "drive the next chapter" at the club, says chief executive Ivan Gazidis.

Emery, 46, joins the Gunners having left French champions PSG after guiding them to the Ligue 1 title.

He succeeds Frenchman Arsene Wenger, who has left after 22 years in charge.

"Unai has an outstanding track record of success throughout his career, has developed some of the best young talent in Europe and plays an exciting, progressive style of football that fits Arsenal perfectly," Gazidis added.

"His hard-working and passionate approach and his sense of values on and off the pitch make him the ideal person to take us forward."

What did Emery say?

Manchester City assistant manager and former Gunners captain Mikel Arteta was a strong favourite to replace Wenger, but Emery - who has a limited command of English - was selected following the Gunners' recruitment process.

He will lead Arsenal into a new era following the departure of 68-year-old Wenger, who won three Premier League titles and seven FA Cups - including two Doubles - with the club.

"I'm very excited to be given the responsibility to start this important new chapter in Arsenal's history," said Emery.

"I am thrilled to be joining one of the great clubs in the game. Arsenal is known and loved throughout the world for its style of play, its commitment to young players, the fantastic stadium, the way the club is run.

"I'm excited about what we can do together and I look forward to giving everyone who loves Arsenal some special moments and memories."

What has he achieved?

Emery announced last month he would leave PSG when his contract expired at the end of the season, despite leading them to the Ligue 1 title.

During his two-year spell with the French giants, he also won four domestic cups, having joined from Sevilla in 2016.

It was in his home country that the former Real Sociedad and Toledo midfielder made his name as a manager, taking charge at Almeria and Valencia before moving to Sevilla in 2013.

There he won three successive Europa League titles as well as finishing runners-up to Barcelona in the 2015-16 Copa del Rey.

With a rebuilding job needed at Emirates Stadium following Arsenal's sixth-place finish in the Premier League, his meticulous, hands-on coaching may well be just what the Gunners need. 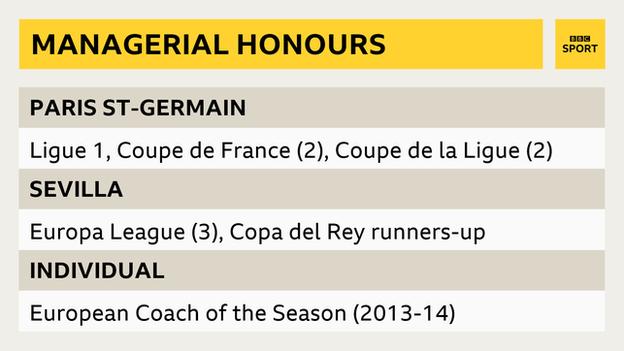 What is his style?

Emery will get Arsenal more organised than they have been. He's really keen on drills and discipline, worked PSG hard at training and has got a very good idea of what he wants to do.

His first game at PSG was the 2016 Trophee des Champions - the French Community Shield - against Lyon and they won 4-1. PSG played with an intensity they never had before. It looked like his philosophy - pressing high, running a lot, attacking a lot, defending a lot, full backs bombing forward.

But then the players said they should go back to what they know because they were used to tiki-taka football where they took their time.

Emery had to evolve a bit to accommodate his players, when it shouldn't have been like that - it should've been the players accommodating his philosophy.

If the Arsenal players are on board with what he wants to do, that's how he won three straight Europa Leagues, because that Sevilla team were all on board.