Tuesday sees arguably the greatest mismatch of any cup final in football history.

At the Stade de France, Ligue 1 champions Paris St-Germain - one of the richest clubs on earth - face Les Herbiers, who are battling relegation from the third division, in the Coupe de France final.

To put it into a financial context, Les Herbiers' entire annual budget of 2m euros (£1.77m) would pay the wages of PSG's injured striker Neymar for 16 days.

This is a club who only reached the third tier Championnat National for the first time in 2015. If they are relegated this summer - a possibility with one game to go - they will be in the same division as Paris St-Germain's reserve team next season.

Their opponents, PSG, have succeeded in 41 consecutive domestic cup games since 22 January 2014. Beat Les Herbiers and it will be the fourth consecutive season they have won both the French Cup and French League Cup. 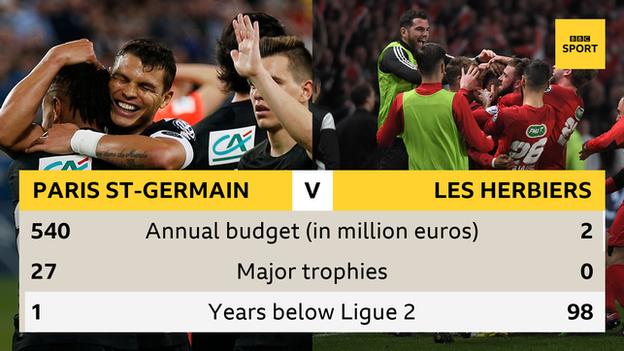 Les Herbiers, who are the fifth team from the third or fourth divisions to reach the final, are virtually bringing the whole town to the final. They have a population of 15,933 and have sold roughly 15,000 tickets.

They have had to come through nine rounds - as many games as they have won all season in the league - but have not had to face a Ligue 1 side yet. In the semi-finals, they beat fellow third-tier side Chambly in front of 34,653 fans in Nantes - relocating for the game as their Stade Massabielle home holds 5,000 and has an average attendance of 1,500.

French football journalist Julien Laurens, a regular on the BBC Radio 5 live Euro Leagues Football Show, says "the whole country will be behind the minnows" - bar PSG fans, of course.

"The reaction to Les Herbiers reaching the final has been fantastic," he says. "We have a history in France of small teams from lower leagues doing well in the cup so people almost expect a fairytale story every year. And so they always react well to it. The French love a David vs Goliath game. So it is a huge deal.

"It could not be a more extreme final than this one considering the budget of PSG and the one of Les Herbiers."

The minnows, unsurprisingly, would make history with a win.

Two Ligue 2 sides have won the French Cup, most recently Guingamp in 2009.

"I think the main reason for lower league sides doing well in the cup is down to the fantastic level of French academies across the country," says Laurens.

"Only a handful of players at the Lyon academy, for example, will make it to the first team but the others are still very good. They will get released and will bounce back in lower league clubs. So the level of lower leagues is very good in France and those clubs often end up doing well in the cup.

"I reckon the Championnat National is a better level technically than the English League One but not as physical or intense. Teams like Les Herbiers play a nice style of football."

It is perhaps unsurprising that the odds on Paris St-Germain to lift the trophy are a record-breaking low.

"PSG's odds to beat third division Les Herbier at 1-100 are the lowest we've ever seen for a cup final in one of Europe's elite competitions," says Oddschecker's Callum Wilson.

"The lower league team will have to pull off the biggest footballing upset in modern betting history if they are to complete the fairytale and win the Coupe de France."

There is one more issue to be dealt with after the cup final for Les Herbiers - defeat in Friday's away trip to Beziers could send them to the Championnat National 2. In a remarkably close division, eight teams could still take the final relegation slot on the last day.

Pull off football's greatest fairytale before then and Les Herbiers could be juggling the fourth tier with a Europa League adventure.