Barcelona legend Andres Iniesta will leave the Spanish club at the end of the season.

The Spain midfielder, 33, has made 669 appearances in 16 seasons, winning 31 trophies with Barca and three major tournaments for Spain.

Iniesta, who has been linked to a move to the Chinese Super League, has not said where he will play next season.

"I said I would never play against Barca so it is not going to be in Europe," he said.

"We will know at the end of the season - there are still things to talk about."

Iniesta has won the 2010 World Cup, Euro 2008 and Euro 2012 with Spain, as well as four Champions Leagues and eight La Liga titles - soon set to become nine - with Barcelona.

"It is a difficult day for me to be here saying goodbye when I've spent my whole life here," he said in an emotional news conference watched by his family, team-mates and manager Ernesto Valverde.

Fighting back tears, he added: "A great deal of who I am, is down to Barca and La Masia - I am very thankful to them.

"I spoke to a lot of people - players, coaches - and I know what they want, but I tried to be honest with myself and the club." 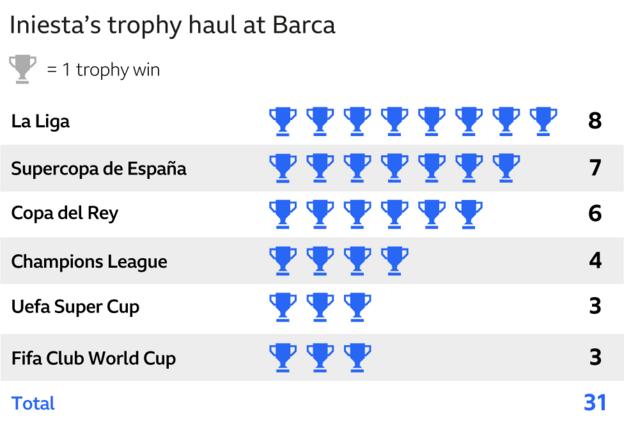 Iniesta has been an integral part of the Barcelona team this season, scoring in the 5-0 Copa del Rey final win over Sevilla.

They have five games left this season and will wrap up the title if they avoid defeat by Deportivo la Coruna on Sunday.

He has spent his entire career with Barcelona after joining as a 12-year-old and has made the second most appearances in the club's history - behind Xavi, his midfield partner of over a decade before his 2015 move to Al Sadd in Qatar.

Iniesta was magnificent in Saturday's cup final win over Sevilla, scoring an excellent goal and running the game before coming off to a standing ovation from both sets of fans.

"I want to be remembered as a great footballer and a great player," he said. "When our football days are over, that's all we are - people." 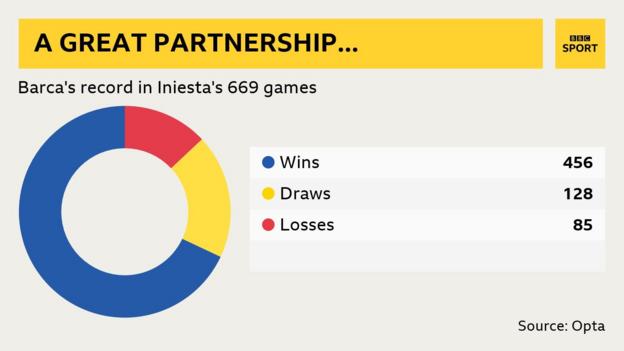 'It's been an honour to play alongside you' - reaction

Manchester City manager Pep Guardiola, who coached Iniesta at Barcelona: "He's another part of the history of Barca, the last 15 or 20 years would not be possible without him.

"I just want to say thank you because he helped me to understand the game better. Just watching him, what he does on the football pitch despite of the amount of tackles, the way he's a professional.

"It was a pleasure - I learned a lot just being with him."

Chelsea and Spain forward Pedro, who played alongside Iniesta at Barcelona, tweeted: "Thanks a lot, it has been a great honour to play alongside you. Good luck in your next stage." 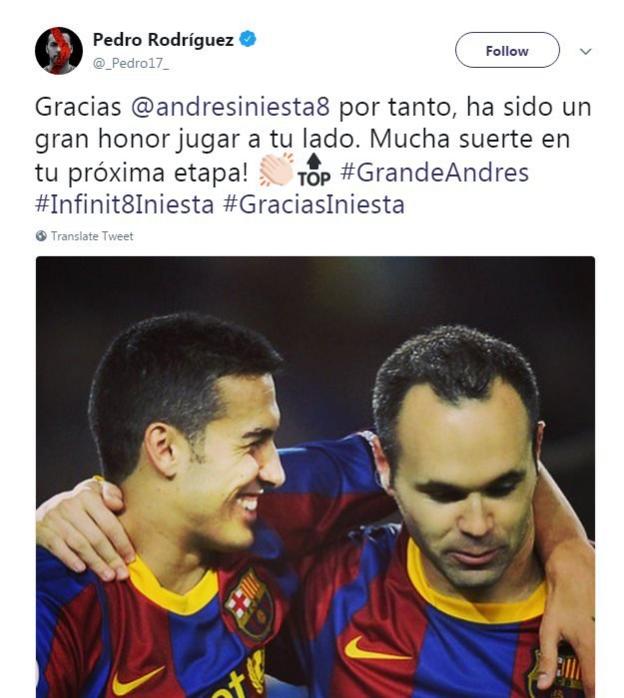 Atletico Madrid striker Fernando Torres, who won the World Cup and two European Championships alongside Iniesta, tweeted:"How many wonderful moments we have lived together!" 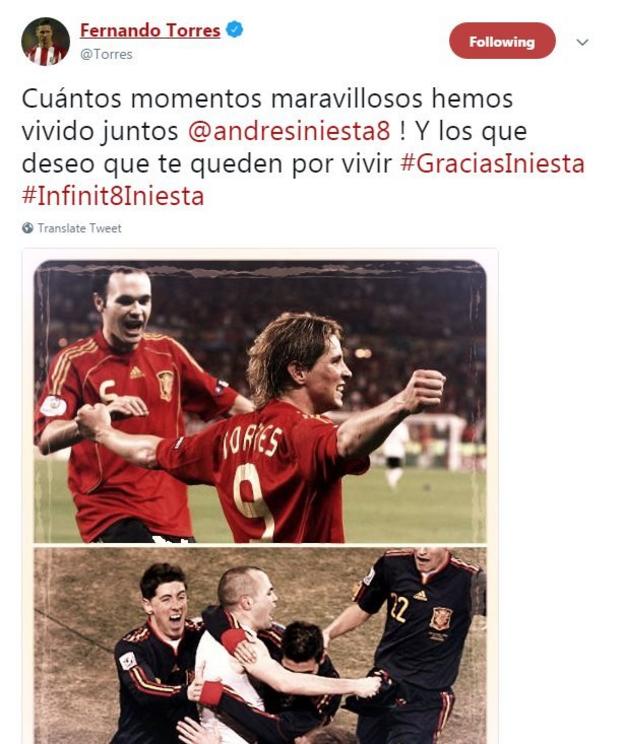 Spain and former Real Madrid goalkeeper Iker Casillas tweeted: "It has been a pleasure to be able to enjoy your football for Spain and share the jersey with you. Together we won the most beautiful. Separately, maximum rivalry with the most respect. Good luck in your new stage." 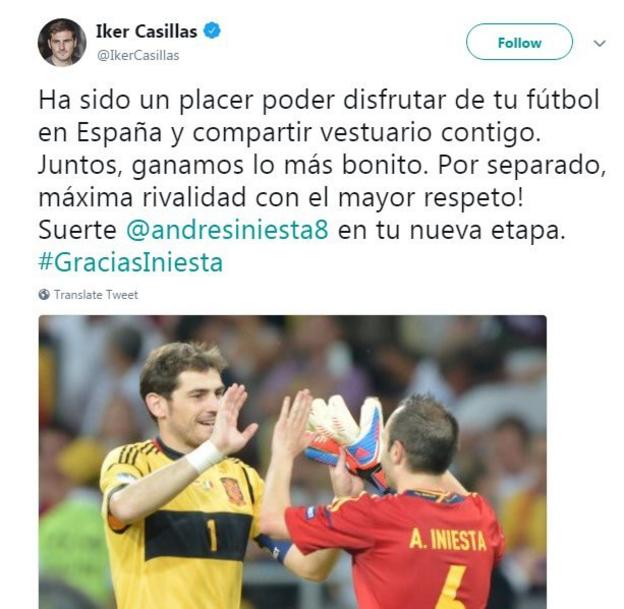 Barcelona president Josep Maria Bartomeu: "You have the eternal gratitude of Barca fans and the whole football world. Today is not a farewell, it's a see you soon."

La Liga rivals Valencia on Twitter: "Thanks for your football! Good luck for the future!"

La Liga rivals Sevilla on Twitter "We want to say congratulations to a legend of Spanish football on a stunning career with Barcelona. You will always have our respect and appreciation and we wish you luck in your next adventure."

490 comments
Back to top
unknown