Caretaker boss Darren Moore refused to contemplate what might have been for West Brom this season after the struggling side staved off relegation for another week with victory at Newcastle.

That result, coupled with Swansea's defeat by Chelsea, means the basement side might achieve the improbable if they win their final two games and their rivals stumble.

Moore, who has taken eight points from his four games in charge, did not want to dwell on the past, saying: "We can't cry over spilled milk.

"What's gone on has gone on and there's nothing we can do. We can talk about ifs and buts - we ain't going to change what's gone on at the start of the season.

"We just look to the next game, and this was a difficult game and we have had to work extremely hard to get a positive result."

The Midlands club are at home to Tottenham next Saturday before travelling to Crystal Palace for the final day of the season. A point for the Swans at Bournemouth next week would see West Brom relegated. 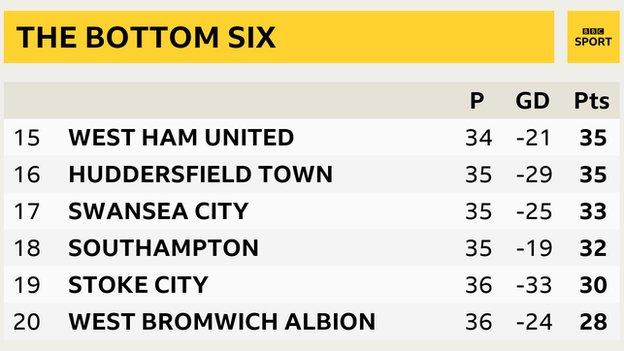 West Brom just needed one goal to see off Newcastle on Saturday, with Matt Phillips smashing in a 29th-minute strike after being picked out by Jake Livermore.

James McClean and Jay Rodriguez also went close for the Baggies, while their keeper Ben Foster made a sensational save to keep out Dwight Gayle's header.

The Magpies were also denied by the post after Kenedy had beaten Foster with a poked shot.

A stay of execution?

Although footballing miracles are possible - remember Leicester's title win in 2015-16? - the Baggies remain strong favourites to go down.

At least Moore - loved by the fans and, seemingly, the players - has injected the team with some belief, which was sorely missing under the stewardship of former managers Tony Pulis and Alan Pardew.

At St James' Park, the Baggies showed the sort of gutsy performance Newcastle had shown in recent weeks. However, with safety assured, Newcastle's levels have dropped and the Baggies took advantage.

They went ahead just before the half-hour mark as Phillips, who was brilliant on the wing, rifled the ball past Martin Dubravka.

Had striker Salomon Rondon been at his sharpest, West Brom might have added to their lead, while Rodriguez forced a good low save from the Newcastle keeper.

Newcastle appear to have switched off since securing their Premier League status - defeat on Saturday was the first time they had suffered back-to-back losses in 2018.

The influential Jonjo Shelvey, Matt Ritchie and Kenedy were all off their game, although the latter went closest for the home side when his shot came off the foot of the post in the first half.

Substitute Joselu, who has failed to make an impact since arriving on Tyneside in the summer, should have earned Newcastle a late equaliser but inexplicably headed wide from six yards.

West Brom caretaker boss Darren Moore: "We did everything that was asked of us. We came to a tough arena, against a good team, and we needed to perform well to come away with a result.

"I was pleased with the result, it was a good, solid performance. We could have scored more goals, we had plenty of chances, and after we scored our defence was resolute too.

Newcastle manager Rafael Benitez on BBC's MOTD: "We tried to do it, but I'm not happy with our performance on the ball, without the ball. Everything we did in the last few games, we didn't do.

"We wanted to get more points to finish higher in the table, but we didn't do well today, we made a lot of mistakes, and we weren't good enough.

"The target was to stay up, but if we can finish ninth we want to do that."

The Baggies face Tottenham at home next Saturday, 5 May (15:00 BST). Newcastle visit Watford at the same time.

208 comments
Back to top
unknown