The club are trying to win back-to-back trebles, and are one win away from their seventh consecutive title.

After defeating a meek Rangers side 4-0 at Hampden, Celtic face Motherwell in the Scottish Cup final on 19 May.

"The last five [league games] will really get the players focused and ensure that we're ready," Rodgers said.

"The important thing now is to close up the league. We're in a really good position, [but] we've got tough games now.

"The final will be a tough game. You saw Motherwell [win against Aberdeen], a totally different type of football to what we will play, which makes it a very interesting final. They work hard, they're very honest and they won't make it easy."

'The players have inspired the Celtic supporters'

If Rodgers' side defeat Hibernian at Easter Road on Saturday, they will retain their Premiership crown, and take a step closer to becoming the first side to win back-to-back trebles, having successfully defended the League Cup last November, beating Motherwell 2-0 in the final.

"I'm always looking to push [the players] and bring out that bit more from them, what makes a difference going into these big games, but they bring the real edge to it," Rodgers said.

"They have really inspired the supporters in my time here, the supporters feel safe that the players are going to give everything they can. We have a way of playing that we know can win games."

Rangers were passive opponents at Hampden, with Celtic quickly and effectively getting the measure of their game plan to flood the centre of the pitch.

Tom Rogic and Callum McGregor scored before half-time, then penalties from Moussa Dembele and Olivier Ntcham rounded off the scoring after the break.

Rangers defender Ross McCrorie was sent off early in the second half for the foul that led to Dembele's spot-kick.

"I was very proud of the team," said Rodgers, who remains unbeaten as a manager in 10 Old Firm games. 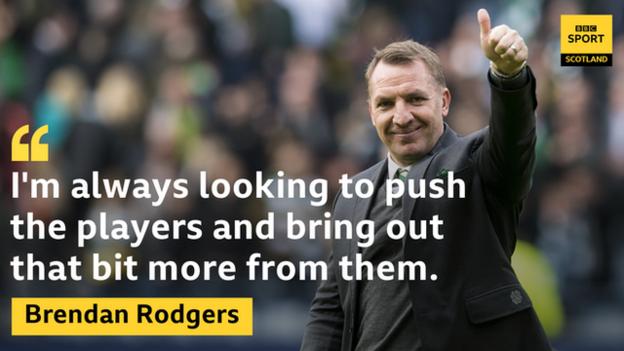 "It was always going to be difficult, but I thought we controlled the game well in the first half. We played around their shape. Rangers looked like they were trying to block the middle of the pitch but that allowed us to exploit the sides.

"We had fairly decent control without too much threat against us. The team was compact, defending well, counter-pressing well and we get a very good first goal that relaxes you as well, a brilliant finish from Tom, a wonderful piece of skill. From there we had really good control throughout the game.

"I said to [Rogic] he didn't start so well, a bit loose in his passing, but the goal comes from [the ball] going up to Moussa, it's played back in and then James Forrest makes a great first-time pass in to Tom, who shows his strength and skill to finish. He was very good and he scores big goals in big games, which is why you always look to him."