Southampton slipped deeper into relegation trouble as Crystal Palace and Huddersfield won to move away from the bottom three in the Premier League.

Olivier Giroud scored twice as Chelsea came from 2-0 down to win 3-2 and leave Saints five points from safety.

Wilfried Zaha netted twice as Palace beat Brighton 3-2, with all five goals scored in the opening 34 minutes, while Swansea drew 1-1 at home to Everton. 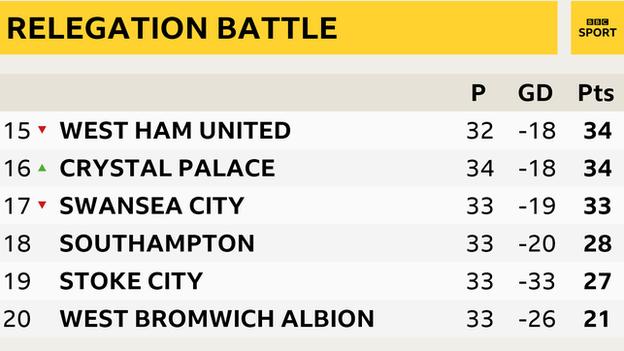 Southampton, who started the day three points from safety, were on track to give Mark Hughes his first league win since being appointed.

But substitute Giroud's introduction sparked Chelsea into life at St Mary's and the reigning Premier League champions moved within to seven points of fourth-placed Tottenham.

Huddersfield jumped to 14th, seven points clear of 18th-placed Southampton, while Palace are six points from danger in 16th.

Jordan Ayew's second-half goal earned Swansea a point against Everton at the Liberty Stadium, but they dropped to 17th.

Manchester City are only one win away from being crowned champions following a 3-1 win over Tottenham at Wembley.

City will win the league if Manchester United lose at home to West Brom on Sunday (16:00 BST).

Mohamed Salah scored his 30th Premier League goal of the season - and 40th in all competitions - as third-placed Liverpool swept aside Bournemouth 3-0 at Anfield.

Sadio Mane and Roberto Firmino also scored as Jurgen Klopp's side moved to within a point of second-placed Manchester United.

First-half strikes from Chris Wood and Kevin Long gave Burnley a 2-1 win over Leicester at Turf Moor to strengthen their grip on seventh place and boost their hopes of qualifying for the Europa League.

Seventh will be enough to qualify for Europe unless Southampton win the FA Cup.

The Clarets are only two points behind sixth-placed Arsenal, who face Newcastle at 13:30 BST on Sunday.

In the Championship, leaders Wolves were promoted to the Premier League as Brentford snatched a stoppage-time equaliser to draw with Fulham.

Cardiff beat Norwich 2-0 to move a point behind second-placed Fulham in the race for automatic promotion, with a game in hand.

Sunderland missed the chance to register a much-needed win in their quest to avoid relegation as they were held to a draw by fellow strugglers Reading.