Rangers players' reaction to being drawn against Celtic in the Scottish Cup will be "etched in their minds", according to Brendan Rodgers.

Graeme Murty's players cheered when they learned the draw for the semi-finals had produced an Old Firm tie.

"This is a game they were cheering for - we respect every opponent," Rodgers said ahead of Sunday's tie at Hampden.

"One of the values of this club is humility we always show respect for every opponent."

Celtic will be aiming to keep alive hopes of a double treble.

"We're at a club here where the history's enormous and what we did last year was historic," said Rodgers. "But we want to keep writing our own history and that means going into these games really focused on the next game.

"They're always tough games these; I've been involved in nine of them now and they're always complicated in their different ways - this will be no different.

"However, we go to Hampden where the team have not only just won there but we've played very, very well. Whenever you play teams so much, everyone talks about this gap... but Celtic's opponents aren't just Rangers.

"You've got Aberdeen, who have been in second position for the last number of years, and you've had Hibs coming up and have done very well. Hearts are getting stronger and teams like are Kilmarnock doing very well; Motherwell doing very well.

"Every game is a challenge - not just the Rangers game. I always respect every other team we play. You can lose any game. Thankfully, over nearly two years here, we've lost twice. That shows you the real resilience of this team." 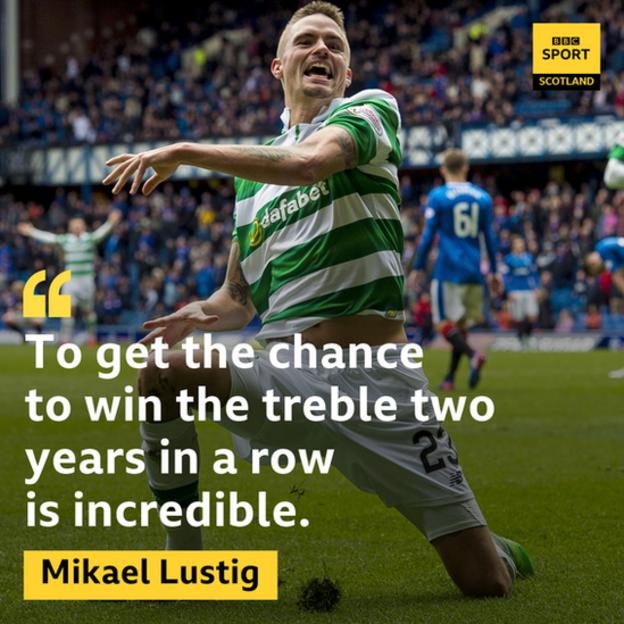 Celtic defender Mikael Lustig echoed his manager's comments and said the players are relishing the prospect of another big game at Hampden.

"The last couple of times we've been at Hampden we've played good football and won the games. So, we're looking forward to it," said the Swede.

"We won the League Cup and it looks like we're going to take the league [title] this year again. It [the Scottish Cup] is then one more thing to go for. So, we're looking forward to it. Last season was amazing. I've been here for more than six years and, of course, every season you want to win the treble. But it's been really hard; to get the chance to do it two years in a row is incredible.

"Our strength is always to see one game at a time and we're always humble, and look at our opponents as being a big threat.

"We're going to do the same [against Rangers] and hopefully we can do the same."