The last time Burnley were playing in Europe, England were world champions.

Victory at home to Leicester on Saturday (15:00 BST kick-off) would open a nine-point gap between Burnley in seventh place and their opponents, currently in eighth - putting the Clarets on the verge of an unlikely European return.

Their form in recent weeks, with wins over Everton, West Ham United and West Bromwich Albion, have earned manager Sean Dyche his first ever Premier League manager of the month award.

And speaking to The Premier League Show, Dyche says this campaign has seen a "big shift" after avoiding relegation last season.

"We are not the real deal. We know every time that whistle blows the match is on a knife edge. We are not going out every weekend thinking we are going to roll through the Premier League," he says.

"We have to earn everything we can and that's been good for the group.

"But whatever comes our way, we will continue to be adaptable and flexible - that's been the key for all of my time here." 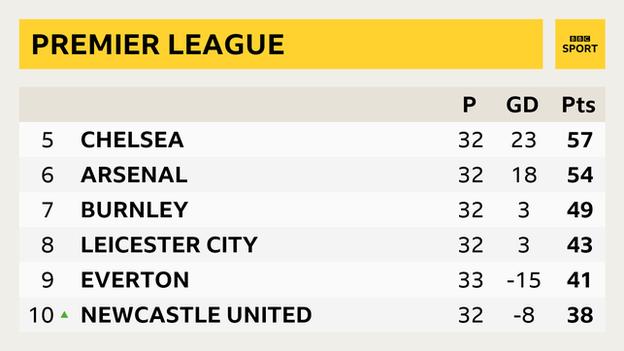 Burnley last played in European football in 1966-67, when they reached the quarter-finals of the Inter-Cities Fairs Cup, losing to German side Eintracht Frankfurt 3-2 on aggregate.

Seventh place will be enough for Europa League football if Southampton do not win the FA Cup. Saints face Chelsea in the last four, with Manchester United and Tottenham the other semi-finalists.

Eighth-place Leicester trail the Clarets by six points, while Everton are two points further back having played one game more.

"We've had some great results, the players deserve fantastic credit, each time we've changed the group they have bought into what we are," adds Dyche, who was appointed Burnley boss in October 2012.

"In the five and half years I have been here the club has changed a lot.

"We've been breaking down barriers all the time. There has been an open-mindedness to keep learning and keep progressing - that has been important. The great thing for me is that the club bought into the bigger picture too.

"Your wage bill changes, depth of recruitment changes, there was the challenge of playing in the Premier League, going down, revaluating, building a training ground, going back up again and we are still remodelling and refocusing now.

"Whenever my day comes, I'll leave the club considerably better than when I got here."

Explainer - how seventh place gets into Europe

The run-in - who plays who