It goes without saying that in mid-April you are going to get pivotal weekends in the English Football League.

But, over the next 48 hours, the fixture list has thrown up at least half a dozen crunch games at the top of all three divisions.

For some, their dreams of promotion could be sealed. For others, it is make or break in the play-off race.

BBC Sport takes a closer look at where the drama will unfold...

Saturday's lunchtime kick-off at Bramall Lane (13:00 BST) is a meeting of two teams who you would not have put in the play-off mix at the start of the season.

The Blades came up as League One champions, while Neil Harris' side were promoted via the play-offs.

Millwall's stats since the turn of the year are incredible.

They are 16 matches unbeaten and moved into the Championship top six for the first time this campaign after Tuesday's 2-0 win at Bolton.

But the match in South Yorkshire starts an incredibly tough run in - the Lions finish with games against Fulham (h), Middlesbrough (a) and Aston Villa (h).

Sheffield United were top of the table in mid-November, but a 5-4 home defeat against Fulham sparked a sequence of just one win in 10 matches either side of Christmas.

Chris Wilder's side halted another mini-blip with Tuesday's 2-1 victory against Middlesbrough, although defeat on Saturday could realistically end their play-off chances.

"Both teams have put themselves in fantastic positions. I've got great respect for what Millwall have done, especially since Christmas," Wilder told BBC Radio Sheffield.

"It's two teams who were not expected to be anywhere near the positions we are in.

"For us to go into the last four games of the season still in with a shout is such an interesting scenario for everyone. There's a number of clubs who will fancy their chances of getting in the play-offs and we're the same."

He added: "I'm not saying a draw kills us but a win puts us in such a strong position. We know the opportunity is there for us and the situation if we don't get a win."

Arguably the biggest match in the second tier is at the Riverside.

If either side come away pointless, their play-off hopes could be all but done and dusted.

Middlesbrough have been consistently inconsistent since coming down from the Premier League last year, but keep nicking victories at the right time. Tony Pulis' side have also beaten plenty of sides in the lower half of the table.

Bristol City were third in the Championship when they beat Manchester United in the quarter-finals of the EFL Cup on 20 December.

Since then, they have won five of their 20 league games and suffered damaging defeats against play-off rivals Millwall and Brentford this month.

Bristol City were last in the top flight in 1980 - they may need to win three of their final four games to be in with a chance of promotion this year.

"It's great to be in this situation where you are playing for something really, really important," Boro boss Pulis told BBC Radio Tees.

"We have got everything to play for with four games to go. It's life or death and it's absolutely fantastic as a sports person.

"The boys have got to go and enjoy the challenge."

Brentford have snuck into the play-off race through the back door.

Three 1-0 wins in a row for Dean Smith's side have put them within four points of sixth place.

Their toughest test awaits on Saturday, though, as they travel to the EFL's form side Fulham.

The second-placed Whites have not lost since 16 December - a 20-game unbeaten run - as they hunt a return to the Premier League for the first time since relegation in 2014.

However, they have only won one of their last 17 home games against the Bees in all competitions.

Speaking of EFL form sides, Plymouth are also right up there.

The Pilgrims were bottom of League One at the start of December, but 14 wins in 20 matches since has seen them shoot up to fifth. 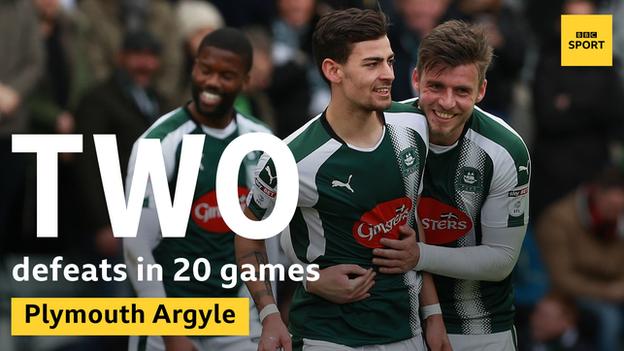 Saturday's opponents Portsmouth, who came up from League Two with Argyle last season, are in fine fettle themselves.

Four wins in their past five matches has put them just a point behind their Devon opponents.

Pilgrims boss Derek Adams told BBC Radio Devon: "We've had a lot of good games with them. The matches with Portsmouth are electric, home and away. The atmosphere is brilliant.

"It's fifth against seventh and that makes it an even bigger game."

Another two teams separated by just one point are Charlton and Scunthorpe.

The Iron's campaign has hit the buffers somewhat. They are without a win since 3 February, sacked manager Graham Alexander last month, but draw after draw has kept them in and around the top six.

Charlton's caretaker boss Lee Bowyer got off to a perfect start with three straight victories following Karl Robinson's departure to Oxford in March.

But a draw against Bristol Rovers and Tuesday's defeat at AFC Wimbledon means nothing is decided regarding their play-off chances.

Who will be promoted first - Accrington or Wolves?

They could not be further apart in terms of budget and star names, but both have been steamrollering their respective leagues.

League Two leaders Accrington have won seven games in a row, are unbeaten since the end of January, and will go up to the third tier for the first time in their history if they beat Exeter.

Nuno Espirito Santo's side will be promoted if Fulham fail to beat Brentford, but if the Whites win then victory in Sunday's 12:00 BST kick-off against West Midlands rivals Birmingham would seal a return to the Premier League for the first time since 2012.

Cardiff's result at Norwich may also come in to play, with defeat for the Bluebirds meaning Wolves only need to draw to secure promotion regardless of the score at Craven Cottage.

Forget the spring cleaning this weekend and stay with us. The BBC Sport website will have every goal and talking point covered in all of the pivotal games in our live text commentaries on Saturday and Sunday.