Paris St-Germain are lining up a move for 25-year-old Liverpool and Egypt winger Mohamed Salah. (Le10 Sport - in French)

The keeper who swapped the Dutch top flight for the US fourth tier - and academic life...

Amanda Staveley's bid to take over Newcastle is back on following constructive talks with owner Mike Ashley over the past few weeks. (Sunday Mirror)

Everton manager Sam Allardyce has emerged as a contender to become West Brom boss if he is sacked by the Goodison Park club. (Sunday Times - subscription required)

Greater Manchester Police will draft in extra offers to protect Liverpool's bus for Tuesday's Champions League quarter-final at Etihad Stadium after Manchester City's bus was attacked before the first leg at Anfield. (Mail on Sunday)

Juventus boss Massimiliano Allegri has moved closer to replacing fellow Italian Antonio Conte at Chelsea next season, with the Serie A side targeting Real manager Zidane as a replacement. (Sunday Express)

Leicester boss Claude Puel says Spanish midfielder Vicente Iborra, 30, could be out for the rest of the season with a hamstring injury sustained in Saturday's defeat by Newcastle. (Leicester Mercury)

Newcastle manager Rafael Benitez says the club are scouting non-league football in the hope of finding a player like Leicester and England striker Jamie Vardy. (Chronicle)

West Ham are considering a move for Fulham's 25-year-old English right-back Ryan Fredericks, who is out of contract at the end of the season. (Mail on Sunday) 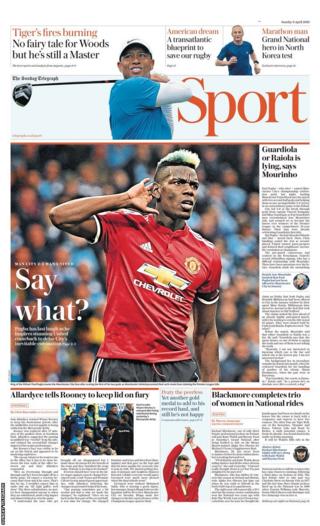