Crystal Palace were denied victory by a late Bournemouth equaliser, while fellow strugglers Stoke were beaten at home by Tottenham and Swansea denied West Brom what would have been just a fourth win of the season.

Manchester City missed the chance to seal the Premier League title as Manchester United came from 2-0 down to win an astonishing derby 3-2 at Etihad Stadium.

At the other end of the table, Joshua King's leveller means Roy Hodgson's Palace side remain 17th, three points clear of 18th-placed Southampton.

Huddersfield moved four points clear of the relegation zone with a 1-1 draw at Brighton. They remain 16th, level on points with 15th-placed Swansea.

Liverpool - for whom leading scorer Mohamed Salah was rested - drew 0-0 with Everton in the Merseyside derby at Goodison Park.

Tottenham's victory at Stoke consolidated their Champions League spot - they are now 11 points clear of fifth-placed Chelsea, who host West Ham on Sunday at 16:30 BST.

The Potters remain 19th, one point behind Southampton and four behind 17th-placed Palace.

There was also a win for Newcastle at Leicester, Jonjo Shelvey and Ayoze Perez scoring before Jamie Vardy's late reply.

Burnley pulled off a remarkable comeback against Watford, scoring twice in three minutes to come from behind and win 2-1 at Vicarage Road. 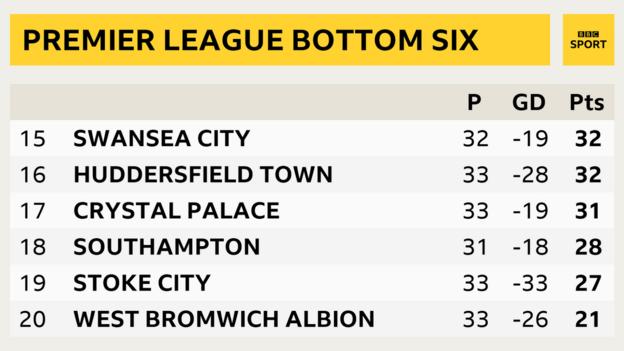 Rangers climbed to second in the Scottish Championship - ahead of Aberdeen on goal difference and 10 points behind leaders Celtic - with a 4-0 win at home to Dundee.

In the Championship, Fulham moved to within two points of second-placed Cardiff as they beat Sheffield Wednesday 1-0.