West Brom have no plans to appoint outgoing Ipswich boss Mick McCarthy as their next manager after the departure of Alan Pardew last week. (Express and Star)

The keeper who swapped the Dutch top flight for the US fourth tier - and academic life...

Manchester United left-back Luke Shaw, 22, is wanted on loan by Barcelona after losing the faith of boss Jose Mourinho. (Sun)

Liverpool and Germany midfielder Emre Can, 24, could miss the rest of the season and the World Cup because of a back injury. (Mirror)

Liverpool's Egyptian forward Mohamed Salah, 25, is using an oxygen chamber in a bid to be fit for Saturday's Merseyside derby against Everton and the Champions League quarter-final second leg against Manchester City. (ESPN)

Roma are considering a move for former Manchester City and Liverpool forward Mario Balotelli, 28, who is out of contract at Ligue 1 side Nice in the summer. (Calciomercato.com)

Qatar will compete as an invited nation at the 2019 Copa America. (Globo Esporte - in Portuguese)

Chris Coleman says he will stay on as Sunderland manager even if the Black Cats are relegated to League One. (Mail)

Watford forward Richarlison, 20, has been assured he has a future at Vicarage Road despite the Brazilian being dropped after not scoring in 21 games. (Mirror)

Stoke forward Saido Berahino, 24, has been dropped from the first-team squad after turning up late to the club's under-23's game on Monday. (Telegraph)

Portuguese boss Carlos Carvalhal has refused to commit his long-term future to Swansea City, even with safety looming. (Mirror)

Slovakian goalkeeper Martin Dubravka, who is on loan at Newcastle from Sparta Prague, will 'fight' for a permanent move to the Magpies - as Udinese monitor the 29-year-old's situation. (Chronicle) 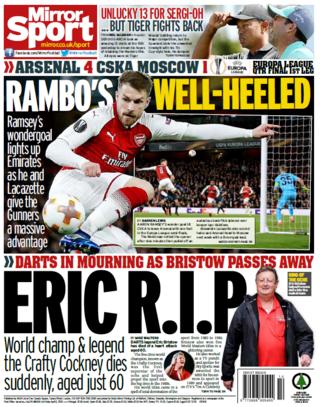 Daily Mirror back page on Friday