Monaco's 24-year-old Brazil midfielder Fabinho wants to leave the Ligue 1 club and is keen on a move to Manchester United. (Sun)

Liverpool are considering a move for Gent's £13m-rated Moses Simon, 22, with Newcastle and Brighton also interested in the Nigeria winger. (HLN - in Dutch)

Chelsea are considering replacing manager Antonio Conte with Monaco boss Leonardo Jardim at the end of the season. (Yahoo)

Manchester United are to make a £26m bid for Napoli full-back Faouzi Ghoulam, 27. The Algeria defender would replace Luke Shaw, 22, who is set to leave this summer. (RMC via Daily Mail)

Manchester United midfielder Andreas Pereira, 22, wants talks with manager Jose Mourinho before deciding his future at Old Trafford. The Brazilian is on loan at La Liga side Valencia. (ESPN)

Bayern Munich winger Arjen Robben, 34, says he had dinner with then-Manchester United manager Sir Alex Ferguson in 2004 and would have joined the club but did not receive an offer and signed for Chelsea instead. (FourFourTwo)

Tottenham players were stunned to learn that the club's chairman Daniel Levy earns more than any of them at £6m a year. (Times - subscription required)

'Wilkins was liked by everybody'

Southampton will try to sign Barcelona's 24-year-old Spain forward Paco Alcacer in the summer if they manage to stay in the Premier League. (Mirror)

Fulham are expecting offers of more than £20m for Scotland midfielder Tom Cairney. The 27-year-old is a target for Leicester. (Sun)

Everton and Bournemouth are keeping an eye on Egypt winger Mahmoud Hassan, who is nicknamed Trezeguet. The 23-year-old is on loan at Turkish side Kasimpasa from Anderlecht. (Sun)

Everton have progressed in their talks to sign Besiktas midfielder Oguzhan Ozyakup, 25, and could complete a deal for the Turkey player in the next two weeks. (Aksam - in Turkish)

Watford are looking to expand the capacity of their Vicarage Road stadium from 21,577 to 30,000. (Watford Observer)

Ipswich Town manager Mick McCarthy, who is leaving Portman Road at the end of the season, is interested in taking the vacant managerial role at West Brom. (Sky Sports) 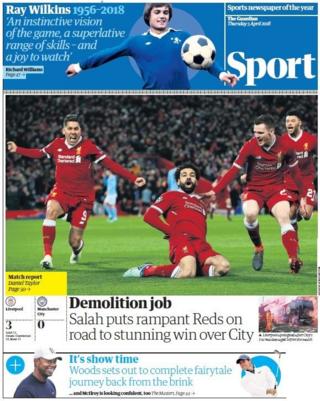