Manchester United forward Jesse Lingard hopes he and team-mates Marcus Rashford and Paul Pogba can emulate the achievements of the club's famous Class of 92.

Several players including Paul Scholes, David Beckham and Gary Neville all came through the Old Trafford youth system at the same time to form the basis of the team that went on to enjoy a period of sustained domestic success.

Like those players, Lingard and Pogba were team-mates at youth level while Rashford is one of the Manchester United academy's most recent graduates.

Speaking to Football Focus, Lingard said: "It is all about making new history but you see the team with Paul Scholes, David Beckham, Gary Neville etc and you see what they achieved and it is only right that the likes of me, Marcus and Paul try and emulate that and win trophies.

"They came through the ranks together, but my (youth) team went their separate ways so to have another home lad like Marcus in the team and with Paul having been here since 16, we just want to try and emulate what they did."

Lingard 'comfortable in himself and his surroundings'

Lingard, 25, made his Manchester United debut four years ago but struggled to hold down a regular place in the side.

After finding himself out of the starting XI at the start of the season he has developed into an important player for the club, scoring eight goals and providing four assists in 26 Premier League games.

"I did well on the pre-season tour but then I was not playing in the first few months of the season," Lingard said. "It is always hard but within those periods you have to try and make an impact and you always have to be ready. I was patient and I knew eventually I would get my chance.

"It is the start now. I am comfortable in myself and my surroundings so that makes me play stress free and enjoy being on the ball. Consistency, goals and assists - that gets you confidence and puts the thought in the manager's head that he can't drop you.

"Sometimes games may not go the way you plan it and sometimes you have to do the dirty, gritty stuff well - you have to tackle, you have to run. I learned that when I was young and it is a good feeling to work hard for the team, to get the ball back." 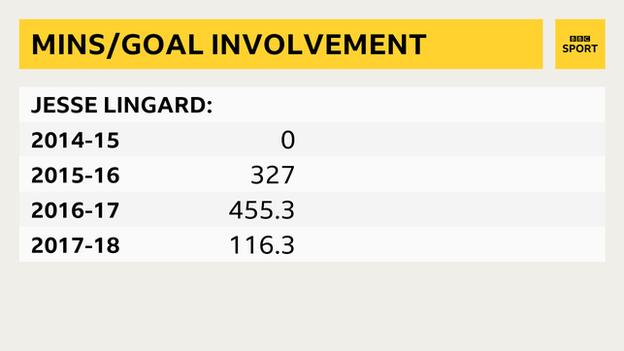 England goal 'a massive moment in my career'

Lingard recently scored his first England goal on his ninth appearance for his country, getting the winner as Gareth Southgate's side beat the Netherlands 1-0 in a friendly on 23 March.

Then, in Tuesday's 1-1 draw with Italy, Lingard impressed with his overall energy and work-rate - highlighted by the fact he completed 100% of his tackles.

He said: "I have had to work hard to get in the starting XI for England. Now all I can do is carry on, work harder and see where it gets me.

"Playing for England is always a big honour anyway and to score my first goal was amazing. It is a massive moment in my career."

Lingard will be hopeful of having done enough to secure a place in England's World Cup squad, but his focus for now is helping Manchester United to finish second in the Premier League and win a trophy via the FA Cup.

"We have a lot of games to go for Manchester United and that is the most important thing at the moment," he said. "I have to do my job here and then see what happens."

Watch the full interview on Football Focus on Saturday, 31 March at 12:00 BST.