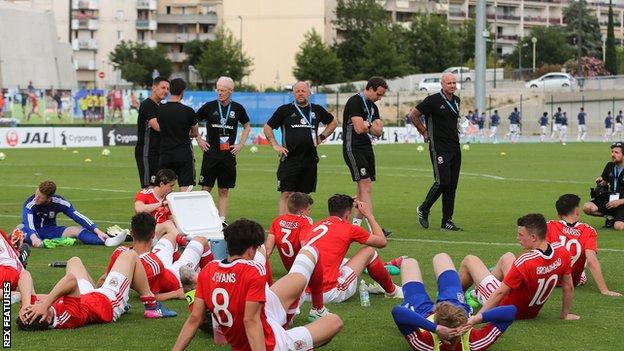 Wales Under-21s hopes of reaching the 2019 European Championships suffered a major blow as they were defeated 1-0 in Bosnia in a qualifier.

Wales would have leapfrogged the hosts with a win in the vital Group Eight fixture, but they lost out to Darko Todorovic's long-range effort.

David Brooks came closest for Wales with a freekick and also had a penalty claim waved away.

Wales are now five points behind Bosnia and four behind Romania.

Wales manager Robert Page said: "We knew what they were all about and I thought we did ever so well in the first half, defensively we were excellent.

"We got in behind a couple of times in the first half, but we didn't have that run in behind.

"We were happy, but in the first 15 minutes of the second half we stepped off... and we felt a goal was coming.

"We had three great chances and we had to finish them. If you don't, you don't deserve anything, but we should have had a penalty.

"We were a little bit stretched in the second half and we were not stopping crosses.

"Ultimately the feeling is frustration, we should have got something out of the game, we probably should have won or at least drawn."

View all Euro Under-21 Qualifying results