A mental health tournament held in memory of a former player, football stars sharing their stories at a cancer recovery workshop and a session dedicated to knife crime made up part of the second annual English Football League Day of Action.

From school visits in Cumwhinton in Cumbria and Tiptree in Essex, to walking football matches in Bolton and a girls festival in Newport, the extensive work done by football clubs in the community was on display on one hectic day.

BBC Sport takes a look at just some of the activities that took place and the people involved.

'It's about saving people's lives'

The Rams initiative is aimed at helping rehabilitate cancer sufferers with exercise and companionship.

While neither Petrov, the ex-Aston Villa and Celtic midfielder, nor Horsfield, a striker for numerous clubs including Fulham, Birmingham, Wigan and West Brom, ever played for Derby, the pair were on hand to assist with the day's activities.

Michael Johnson, the former Derby defender who is now a club ambassador, said he was proud of the "waves" the Championship outfit are making in the community.

"There are so many programmes that this football club run that are not actually about the Saturday afternoon, it's about saving people's lives," Johnson told BBC East Midlands Today. 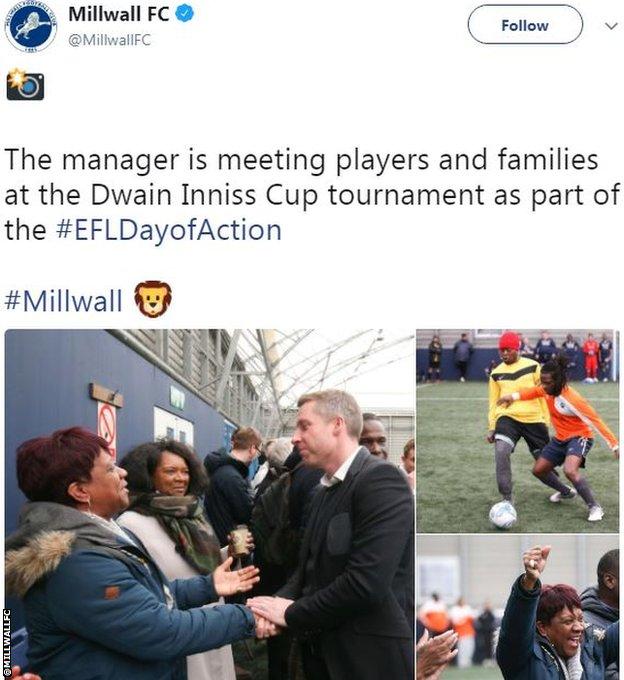 In London, Championship side Millwall ran a mental health football tournament in memory of Dwain Inniss, a player from the mental health league who recently passed away.

More than 80 players took part in what was an emotional occasion.

Lions manager Neil Harris also made a special appearance to meet players and the family of Inniss and said it was a "chance for us as a football club to show support".

Talking to the club website, Harris added: "It's a great initiative and great that the EFL have pushed all 72 league clubs to do days like this."

'I'd never won a race before'

Winning a 50m race on a small athletics track in west London is a moment that six-year-old Isabella Romaner will never forget.

The youngster is one of 180 children involved with the Short Breaks programme run by Brentford FC Community Sports Trust.

For Isabella, who suffers from developmental delay and has hearing and sight issues, the programme has helped lift her confidence and broadened her horizons.

So excited was she to talk about the programme that she prepared a statement to read to BBC Sport: "Athletics has helped me do javelin, hurdles, 200m races and discus. It makes me happy.

"I've never tried any of those sports before. When I won my first race I was very happy because I'd never won one before. Also there is a girl called Eva and she is my friend, she cannot see or hear well like me. It's nice because on Tuesday football players are going to see us here at athletics."

Isabella's mother Victoria said the chance for her daughter to mingle, play, train and compete with other children with disabilities makes for a refreshing change, as she is often left behind when playing with class-mates in the playground.

"She is progressing really well, but she was late to walk and will always be behind her peers," said Victoria. "This has helped her general confidence so much, and all the running has helped her physically as well.

"The confidence she has gained spills out into everything. She is not great with things like a bike or scooter, but she is a bit more confident now to attempt things."

The Short Breaks initiative, commissioned by the Hounslow Council, is just one of a multitude of community projects that the Championship club is involved in.

Brentford, who work mainly across the three London boroughs of Ealing, Richmond and Hounslow, engage with about 500 disabled participants, and overall the Sports Trust is involved with more than 11,000 children and adults each year.

The work they do is diverse and ranges from delivering athletics and kayaking sessions, helping students through an extensive network in local schools and delivering programmes on estates to linking in with people connected to youth offending services and those on the edge of social care.

The Trust also has a 'learning zone' connected to it and is branching out with specialist teams looking at obesity and weight loss with children and adults.

"What we do is look at who we can support in the local community and how we can help them," said Peter Shears, the senior project manager at Brentford FC Community Sports Trust.

A knife crime workshop, to a multi-sport disability session, to a football festival - EFL clubs in the east of the country showed that 'community' takes many forms.

While it was all about getting active for MK Dons and Luton Town, who called on top scorer Danny Hylton and Alan Sheehan to show off their tricks and flicks.

'We hope we are improving people's lives'

In the lead up to the EFL Day of Action, 18-year-old school reporter George headed to Luton for BBC Look East to find out what the Hatters' Football Club Community Trust is doing in their local area.

More than 3,500 people, from those playing in junior girls and boys teams to those in disability squads and over-50s walking football teams, are involved with programmes delivered by the League Two club's trust.

"This is our way of engaging with our supporter base and we hope that by going back into the community we are making a real difference and that we are improving people’s lives," said Kevin Thoburn, head of the trust.