Rochdale boss Keith Hill suggested Spurs midfielder Dele Alli was right in the way he won a penalty that almost knocked his side out of the FA Cup.

Alli, 21, earned the spot-kick from which Harry Kane put the Londoners 2-1 up late in Sunday's fifth-round tie.

But Steve Davies' equaliser secured a Wembley replay for the League One club.

"I won't hold it against him and if he does it for England in the summer and we win the World Cup, I will certainly be supporting him," Hill said.

"I'm led to believe he's looking for it but we get too involved in controversy."

Referee Bobby Madley pointed to the spot after Alli went down inside the penalty area under pressure from Harrison McGahey's challenge.

Since the start of the 2015-16 Premier League season, Alli's first campaign in the top flight, no player has been booked more times for diving.

But, speaking on BBC One after the game, former Newcastle striker Alan Shearer and ex-Spurs midfielder Jermaine Jenas believed Madley made the right decision.

And Hill said he backed Alli, or any of his own players, to make the most of challenges in the penalty area.

Fancy a flavour of the FA Cup?

Sign up for the 2018 FA People's Cup and take your chance to play at St George's Park and go to the FA Cup final.

"If a centre-forward or midfield player feels as though there is a penalty opportunity to be gained - brilliant," said Hill, 48.

Even Pochettino thought tie was 'magic'

The prospect of Rochdale claiming a replay seemed unlikely, with Hill's side bottom of League One and 11 points from safety.

But Davies' dramatic injury-time equaliser will see them play at Wembley - Spurs' temporary home while White Hart Lane is redeveloped - in the week beginning 26 February.

And it was a moment that had everyone feeling the lustre of the FA Cup - even Tottenham's manager.

"The FA Cup is magic. We have another opportunity at Wembley, the same situation like before," said Spurs boss Mauricio Pochettino, who made 11 changes to the side that started in Tuesday's 2-2 Champions League draw at Juventus.

Hill, who has twice guided Dale into League One across two spells in charge, added: "I've never had a moment like that.

"Wembley is a reward for the players' efforts. We've got that booster and momentum and they will be looking forward to it as will the supporters.

"It's Milton Keynes [MK Dons in League One] on Wednesday and that's the bread and butter."

Davies, scorer of the late equaliser, said: "When you look at this day and how special it is, it was written. We've got great team spirit and will never give up."

Dale's opening scorer Ian Henderson said: "We can't wait to go to Wembley. We always felt we had an opportunity, Stevo [Steven Davies] is an unbelievable finisher and we deserved that today.

"I've always dreamed of playing at Wembley and now I can say I've played there - if I'm fit and picked."

Alan Shearer said on BBC One: "It was just an incredible game of football. Rochdale deserved to be in front at half-time. Tottenham dominated in the second half and brought the big boys on to change the game and we thought that was it but what credit to Rochdale."

Former England and Liverpool midfielder Danny Murphy said on BBC One: "Unbelievable. They've picked themselves up with spirit and determination and what a good finish from the substitute Steve Davies.

"I'm pleased for the whole club, they have played tremendously well and get a trip to Wembley."

And here's how Rochdale fans celebrated... 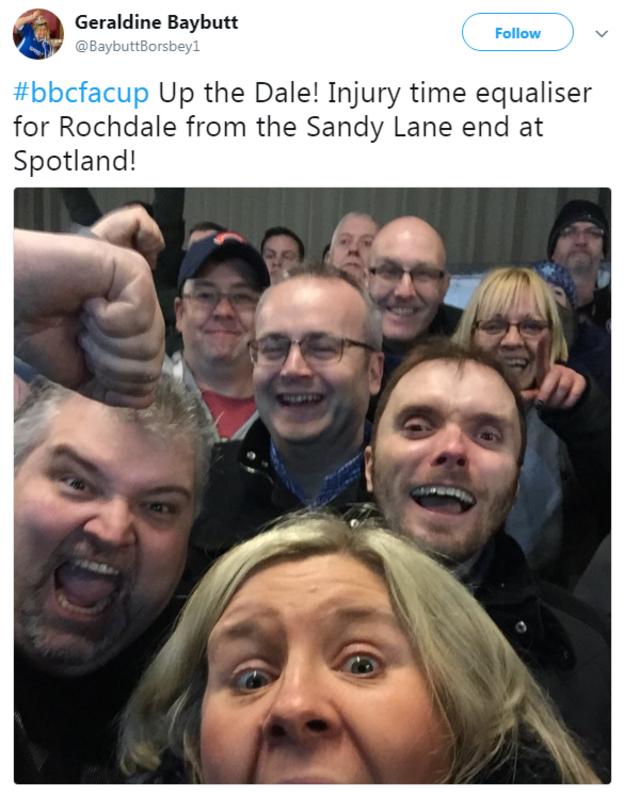 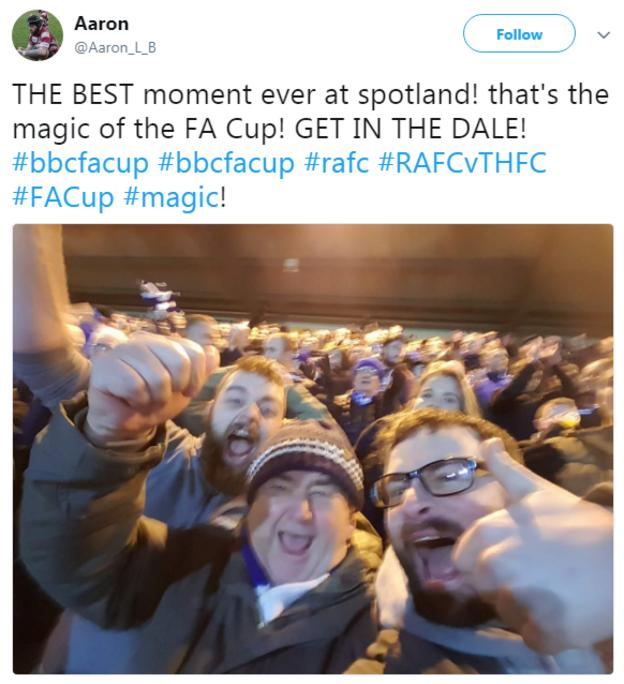