The Uefa Nations League is under way - so what is it and how does it work?

Is it a complicated irrelevance, or, for some, their best route to Euro 2020?

Uefa's 55 nations have been split into four tiers for the new competition - with League A the highest and League D the lowest. Each league has four groups within it, and offers the prospect of a second crack at European Championship qualification.

England have been placed in League A's Group 4 with Spain and Croatia.

Wales and the Republic of Ireland have beendrawn in League B's Group 4 with Denmark.

Northern Ireland, also in League B, are up against Bosnia-Herzegovina and Austria.

Not all of the nations competing will see the competition in the same way.

England, Wales and Northern Ireland might baulk at the idea of needing a back-door route to Euro 2020, given all three were at the finals in France in 2016. But would they all be entirely confident of finishing in the top two places in a five- or six-team group to earn qualification in the usual way?

The Scottish FA is being more circumspect. With its focus sharpened by Hampden hosting four Euro 2020 tournament matches, it is selling Uefa's new competition - one which will effectively replace most international friendlies - to sceptical fans as a way of ending what would be a 22-year absence from major finals.

The reasoning? The fact that two of the bottom 31 teams in the 55-nation European rankings are now guaranteed qualifying slots.

The draw for the inaugural Uefa Nations League took place in Lausanne in January and is, according to Uefa's head of competitions, "different, not complex". 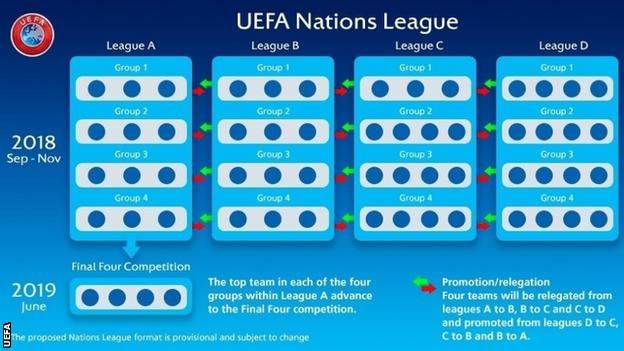 It is complex, though, isn't it?

The detail becomes fiendishly complicated, but the basic structure of a competition that will be played in the "empty" seasons without a European Championship or World Cup is relatively straightforward.

The 55 European nations have been arranged into those four tiers, Leagues A to D, based on their ranking - the top 12, the next 12, etc - with each tier split into four groups of three or four teams.

The sides in each group will play home and away in a 10-week period between September and November of this year, with the team finishing top of each section being promoted to a higher tier and the nation finishing bottom dropping down one.

And, in a final flourish, the four nations who win the groups in the top tier will advance to a knockout finals next June to decide the Nations League winner.

"If you look at it you will realise that is the system of the domestic club leagues," Giorgio Marchetti, Uefa's head of competitions, told BBC Sport.

"It requires explanation and everyone to focus on it, but it is not particularly complicated I would say."

What about this being a back door to the Euros?

This is where things start to get a little bit tricky.

The actual qualification process for Euro 2020 has been simplified, with the top two nations in the 10 groups claiming a place in the finals.

The seedings will be determined by how teams performed in the preceding Nations League and the 10 fixtures will be wedged into an eight-month window from March-November 2019. So far, so familiar.

However, that leaves four places at the finals - which will be held in 12 host cities around the continent - still to be filled, which is where the fun starts.

Remember those Nations League groups? The four group winners in each tier will then play-off in March for a first crack at claiming one of those four vacant spots. 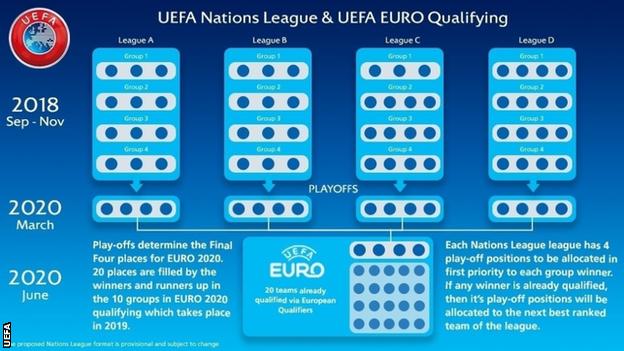 However, should a nation already have qualified, their place will go to the next highest-ranked team from their Nations League tier. To confuse things further, that will not necessarily be the runners-up in their group.

Furthermore, should there not be enough teams in one of the tiers… actually, let's not confuse ourselves with that. Another Uefa video might help...

Could you 'game' the system, then?

As you may have deduced from that video, the structure of the play-offs means that one nation from each tier will claim a finals place. So one of Azerbaijan, Macedonia, Belarus, Georgia, Armenia, Latvia, the Faroe Islands, Luxembourg, Kazakhstan, Moldova, Liechtenstein, Malta, Andorra, Kosovo, San Marino or Gibraltar will qualify for a major tournament.

Likewise, Scotland are looking at League C and thinking that, as the third-highest ranked nation, they have a decent chance of winning their section before emerging from the four-team knockout play-off against, perhaps, Hungary, Slovenia and Romania.

All that might raise the question, then, whether it could be in some nations' interests to strategically tumble down a tier with a couple of experimental team selections in the hope of securing a circuitous, but more forgiving, route to a major tournament.

It wouldn't be the first time that teams have shown some street smarts around fixture scheduling.

With friendlies hitherto only garnering 40% of the Fifa ranking points that competitive games do, some nations have fathomed that they are better not playing exhibition matches at all. That way, they protect their ranking and reap the benefit when it comes to qualification draws.

Romania and Wales are among those who have been rumoured to have dabbled in such sly scheduling but the Nations League should end that practice.

"The more matches played in competition makes it all the better," said Marchetti. "Clearly there is more harmonisation as all the teams will play roughly the same number of games, without a free choice of opponent.

"And these finals are not an add-on to the calendar. They are on dates that are currently on there. We are not asking more sacrifice of the players, they will simply play something else."

So why else are we doing this?

Uefa is concerned by the relative strength of the club game and sees this as a means to redress the balance.

But, perhaps more importantly, broadcasters have committed to a package that runs until 2022. Who wouldn't watch Germany playing Spain in a competitive final in an otherwise fallow football summer?

There have even been murmurs that Fifa is enthused enough by the plans to be considering a global equivalent.

But in reality, the changes will have little real effect on the top-tier nations - save a handy safety net should they mess up qualification - as their glamour friendlies are simply replaced with a more codified competition against the same elite countries.

But for those for whom qualification is a dream rather than an expectation, this provides a significant glimmer of hope.

"It is a new competition and like every newborn it takes time to establish itself, settle down and be recognised, but we think we have good ingredients for success," said Marchetti.

"This will turn most of the friendlies into competition matches and that will be a much better proposition for fans." 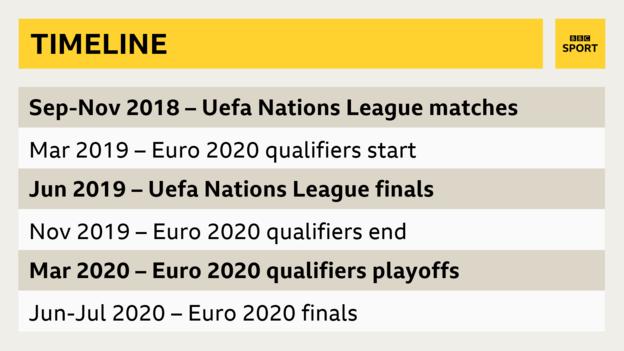