Coutinho's £142m transfer to Barcelona went through on Monday.

Six days later, and despite the absence of £75m defender Virgil van Dijk with an injury, Liverpool held on to beat the league leaders 4-3 at Anfield.

"It is a very important statement, but that's all," said Klopp.

"It was not that I said in the meeting before the game: 'It would help a lot if you could win then nobody would talk about Coutinho.' But it is important we showed it is possible to play without him."

The defeat was City's first in a league match since April, and ended their hopes of emulating Arsenal's 2003-04 'Invincibles'.

Liverpool led 4-1 midway through the second half thanks to goals from Alex Oxlade-Chamberlain, Roberto Firmino, Sadio Mane and Mohamed Salah - the last three of which came in an eight-minute spell around the hour mark.

Leroy Sane had cancelled out Oxlade-Chamberlain's opener - and substitute Bernardo Silva and Ilkay Gundogan scored in the last six minutes to set up a thrilling finale.

But the hosts held on to move up to third in the table, level on points with Manchester United in second and fourth-placed Chelsea.

"Maybe it is an historic day," said Klopp. "Maybe it's the only game they lose in the whole season because they are so strong. I really think we deserved it."

Liverpool employed similar tactics to those used by Championship side Bristol City as they lost 2-1 to Manchester City in the first leg of their Carabao Cup semi-final earlier this week.

"The pressing in and around the box in the second half was from a different planet... outstanding," added Klopp.

This was City's 23rd league game of the season - and they had not lost in the competition since a 2-1 defeat at Chelsea on 5 April.

They remain 15 points clear at the top, though Manchester United will trim that to 12 should they beat Stoke at Old Trafford on Monday.

City are still in all four competitions, and face back-to-back cup ties after Saturday's Premier League match against Newcastle at Etihad Stadium.

They travel to Bristol City for the second leg of their Carabao Cup tie on 23 January before visiting Cardiff or Mansfield in the FA Cup fourth round on 28 January.

The Blues resume their Champions League campaign with a last-16 tie against Swiss side FC Basel in February.

"You lose today against a fantastic team. You have to be sure to win the next one and fight until the end to win the Premier League.

"Especially in that league, with a lot of games in the last two months, with four competitions. Now analyse and be positive.

"People asked if everything was over and done before Christmas, and now it's January and it's not. We have a lot of games to win to be champions."

Guardiola said the game against Newcastle was "so, so important" adding: "All the teams lose games. It is important to not lose again."

'The perfect advert for football' - analysis

Liverpool manager Jurgen Klopp suggested this was the sort of game that could convert non-believers to the joy of football - and it was just about the perfect advert for the sport.

In other words - just about the perfect package for the neutral observer.

For supporters of Liverpool there was the elation of seeing their side make a powerful statement in their first match following Philippe Coutinho's departure, deservedly defeating the runaway league leaders after a 22-match unbeaten run.

Liverpool were incessant, exciting going forward and still possessed just that hint of vulnerability to turn what should have a victory lap in the final minutes into a nerve-shredder as City pulled it back to 4-3.

For City fans there was the rare taste of defeat, but still a performance that demonstrated their bravery on the ball even when behind, although errors from John Stones and the normally reliable Ederson contributed to their undoing.

Liverpool currently look the side in the best shape to at least make some sort of challenge to City at some point in the future, given their attacking riches in a win achieved without injured £75m defender Virgil van Dijk.

This was a day of disappointment for City, but they played their part in a magnificent spectacle - and the table shows they remain the country's outstanding side by some distance.

After more than 65,000 of you picked what you thought was the strongest combined Manchester City-Liverpool XI before Sunday's meeting between the two teams, it contained only three players from the side that claimed the three points. 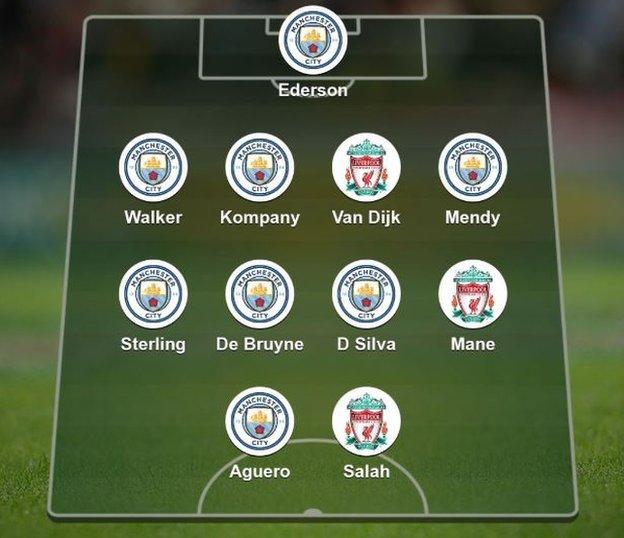