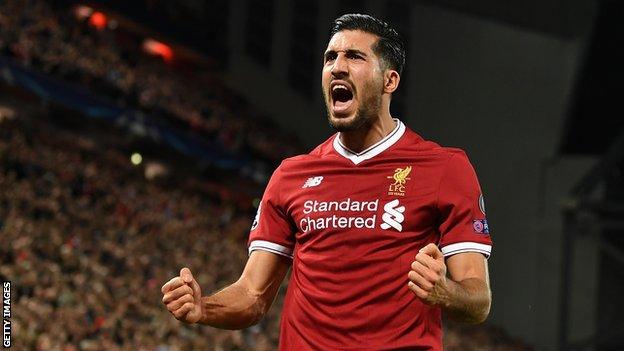 The January transfer window is now open and some of the top players in Europe are being linked with moves.

But who else could be on the move from Europe's top leagues?

Potentially, centre back might actually be his ideal position, although that's one of the reasons he left Bayern Munich - because he said he wanted to play midfield.

I think he still needs to improve his decision making I think he needs to time his runs better. He has this tremendous energy and likes to break from deep and of course the comparisons with Juve midfielder Sami Khedira are inevitable - they look a little bit similar as well.

He could thrive in this Juventus midfield, especially if they play a classic three-central-midfield game and he can take turns in holding and running. He would be a great signing, especially on a free.

For all Liverpool fans it is a given that he is going to come and replace Coutinho as early as this month. Right now Monaco have received no offers from Liverpool or Arsenal, or anyone else. In the summer he was definitely closer to joining Arsenal than Liverpool.

But as much as I would love him to go to Liverpool because he would suit this team perfectly - he can play in different positions; he is so good on set pieces; his left foot is amazing - I think Klopp would make him even more world class than he already is.

It's going to be interesting because he hasn't had a very good season so far compared to what we have been used to before. He was very close to leaving in the summer but stayed being loyal to the club because they couldn't sign anyone to play before January.

Now it looks maybe like Barcelona will be his favourite destination, although I do not know if they will have the 100m euro to pay his release fee. His friend Paul Pogba is very keen for him to join Manchetser United so that remains a very credible option for him.

There is also Real Madrid who at some point will have to buy a big name star. However, if he does not improve or have a good World Cup then some clubs will be put off. The release clause is quite affordable to most top clubs but his wages are very high. The next six months are going to be huge for him.

A transfer is not possible in January. There has been a lot of speculation about what's behind the dip in form that Dybala has had for the last couple of months.

Former Juve midfielder Pavel Nedved came out at the Champions League draw recently and said he needs to get his private life in order. That put in to question his professionalism, although I don't think that was the target of Nedved's criticism. I think it is more that Dybala has left his agent, who he has had for a long time, and trusted his affairs to his older brother.

I think that has not gone down particularly well at Juve. They don't know who to speak to. There is this idea that the change of agent has caused some instability which no-one is particularly comfortable with.

But Juventus have said they have a long-term project for Dybala. They have given him the number 10 shirt and he is the closest thing they have had to Alessandro del Piero since he retired.

Juve said to him in the summer that they wanted him to be their Neymar - they wanted him to be their star. We all know what Juventus are like. No one is indispensable to them. They will consider the right offer but Dybala is possibly the exception to that. Juve want him to become the face of the club for years to come. He is not only the best talent but also the most marketable player in Serie A.

I think the player that Bayern want to off-load is Arturo Vidal. I think it's an open secret that Bayern think that his attitude, tactical indiscipline and injury problems - although he hasn't missed many games because he's been managed well - are a concern.

If there was an offer for him then Bayern would be very happy to entertain it - but not now. Manager Jupp Heynckes has categorically ruled out letting anyone go in January but in the summer I think they would be happy to listen to any offers.

He is doing really well at Nice. He has that unofficial 40m euro release clause in his contract. Barca came in for him last summer at 40m euro but they moved the goalposts and said 50m euro.

That's the only reason he didn't end up at Barcelona. You have to feel for the guy. He cried, he actually properly physically cried, because the move didn't happen. Now he is not having such a great season with Nice. He is still very talented but he was so heartbroken he has not shone as much as he would have.

It looks like Everton are leading the race. But when you are so close to Barcelona I don't think it's the greatest feeling to be linked with Everton. But he wants to leave and they might let him go for the right price. I still think he is a very good player and he would be a great addition to this Everton team but he could do better.

He has said that he renewed his contract at Bayern when he was injured and he really respected the club for that and said he was really happy there. I think with Coutinho going to Barca that would suggest to me that Thiago doesn't have a natural space at the Spanish club.

The transfer is not something I've seen taken seriously there at the moment. At Bayern, manager Jupp Heynckes has a great relationship with all of his players. He's like a kind uncle. What has possibly been misunderstood is that Thiago is one of the few who had a good relationship with (previous manager) Carlo Ancelotti. But to take that and say that he has fallen out with Heynckes is incorrect.