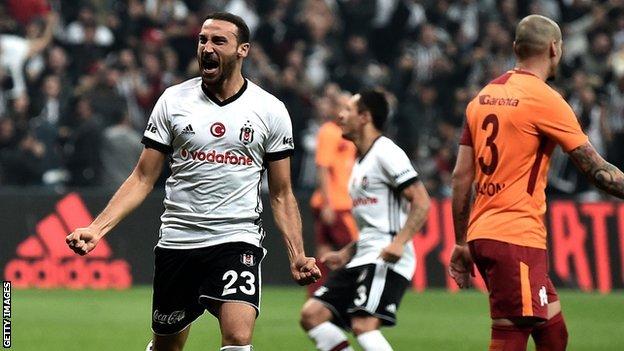 Everton manager Sam Allardyce says the club's new £27m signing Cenk Tosun is "the best in Europe" at that price.

The club announced the deal during half time of their FA Cup third round tie against city rivals Liverpool, after the Turkey international agreed a four-and-a-half-year contract.

Tosun, 26, had been in London awaiting permission to complete his move.

"This lad looks like he is strong mentally and has a good pedigree," said Allardyce.

The deal had been delayed as Tosun's previous club Besiktas held out for more than the £25m Everton thought would be enough to seal the transfer.

Tosun has helped the Turkish side reach the last 16 of the Champions League, where they will meet Bayern Munich.

He scored 20 league goals last season as Besiktas retained their Super Lig crown, and has scored eight league goals and four in the Champions League so far this season.

Allardyce said his first signing since becoming Everton manager in November is "an all rounder with good movement".

"He is two-footed, perhaps not the biggest but he's very efficient in the air and in the box he gets good space to get his head on the ball," said the former England manager.

"We looked at the qualities of the player, his talent and goalscoring, and his resilience, too. I do not think you can look any more than we have done."

Tosun, who has been capped 25 times for his country, said he is eager to be involved in Everton's next Premier League game, against Tottenham on Saturday 13 January.

"I want to play as soon as possible," he said.

"The Tottenham game will be the first game I am available for and I'm very excited about it already.

"Everton has really, really big names, big players. I'm excited to play with them and to learn from them as well, players like Wayne Rooney and the very good creative players we have here, too.

"I bring my skills here and everybody is going to see what kind of player I am."