Hearts manager Craig Levein says it is "a miracle" that the Edinburgh club built a new stand at Tynecastle without running up significant debts.

The £15m new main stand at the ground was boosted by a £4.5m contribution from an anonymous benefactor.

"It's been a tough year," said Levein, who made the transition from director of football to the dugout.

"It really is a miracle how we have managed to build a new stand and not got ourselves into real debt."

Hearts sacked head coach Ian Cathro before the league season kicked off in August, with Levein taking up the managerial reins.

And the manager insists the Gorgie men are in a good place off the field as they prepare for the upcoming transfer window.

"Off the field we are in a fantastic place," Levein said. "The club is extremely well run, the academy side is now beginning to bear fruit and we are starting to see the benefit of that. It has been a tough year but I am hugely excited about the future."

Looking ahead to facing Aberdeen this weekend, Levein revealed that Hearts will be without five first-team regulars for the trip to Pittodrie.

Prince Buaben, Ross Callachan, Jamie Walker, Rafal Grzelak and Connor Randall are all sidelined, which will give some of the club's youngsters the chance to shine.

"We have a few problems on top of the ones we have already got." Levein said.

"It's not great. It's just been a tough three or four months really. We have had a catalogue of injury problems.

"I think all the games just stacking up along with the fact we have a small squad. But we have more than 11 players so we will put something together for sure. It's going to be whoever is left."

Jamie Walker, who has been linked with a move to Wigan Athletic, will undergo a scan following a knock he sustained in the Edinburgh derby draw.

Levein said Hearts have yet to receive an offer for the winger, whose current deal expires in the summer. 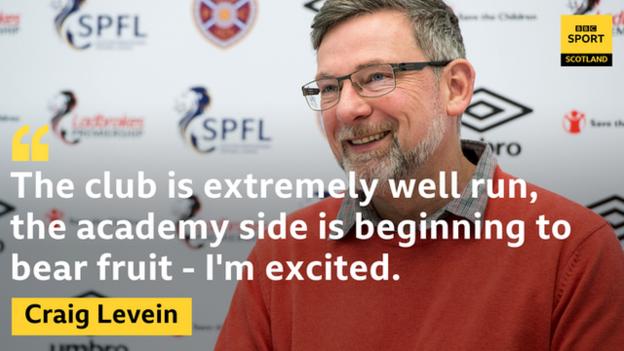