A replay looked on the cards until Romelu Lukaku laid the ball off to Jesse Lingard, who took a touch and sent a 20-yard shot on the bounce into the top corner.

And half-time substitute Lukaku sealed the win after playing a one-two with Anthony Martial to cap off a counter attack.

United striker Marcus Rashford had hit the post in both halves - with a close-range header that he should have buried and a fierce shot across goal.

Derby, second in the Championship, played well and Tom Lawrence forced a good diving save from Sergio Romero. 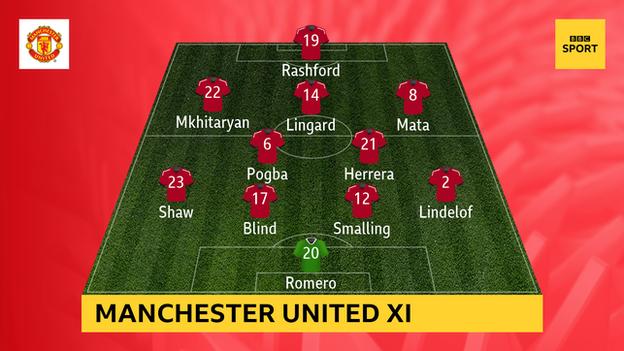 After losing to Derby's Championship promotion rivals Bristol City in the Carabao Cup, United boss Jose Mourinho wanted to make sure there was no repeat and named a strong line-up, even though he made five changes.

Sitting 15 points behind Manchester City in the Premier League, and not among the favourites for the Champions League, the FA Cup is their best chance of winning a trophy this season.

They dominated, with Pogba, Mata and Rashford forcing saves from Carson.

But the big chance of the first half came when Henrikh Mkhitaryan's cross found Rashford, who was unmarked and only four yards out but somehow he headed against the post.

Mkhitaryan was poor, that cross aside, and was replaced at half-time by Lukaku, six days after the Belgium striker left the pitch on a stretcher with a head injury against Southampton.

It was more of the same again in the second half, with Mata having a shot parried, Lukaku having a follow-up blocked and then Pogba firing wide.

Rashford again hit the post, this time from a tight angle across goal from Lingard's pass.

And with six minutes to go, Lingard gave United the lead when he lashed home from Lukaku's lay-off.

Derby pushed for an equaliser, sending men up for a corner, and Pogba's 60-yard clearance found Lukaku on the halfway line. He ran towards goal and played a one-two with fellow substitute Martial before smashing the ball through Carson.

Plenty of encouragement from Derby

While United deserved their win, Derby played their part in a good game. Like the Red Devils, they made plenty of changes - six - but still played a strong team.

Left-back Marcus Olsson had plenty of success down the wing in the first half and forced Romero into a save from his header.

Tom Huddlestone had a shot blocked, with the United keeper possibly beaten, and Lawrence produced another save from the Argentine.

Derby could probably have done without a replay and they now focus on their Championship promotion push. They sit second in the league, two points above third-placed Cardiff.

If they can stay there, they will be back at Old Trafford in the Premier League next year.

Manchester United boss Jose Mourinho to BBC Sport: "I was feeling that we were close to scoring and we never stopped trying. But when you get past 80 minutes and the goal hasn't come, you fear the second match. But the team kept trying so I knew the goal could arrive.

"It was a great shot by Jesse Lingard in the top corner, he's in a moment of confidence where things go well for him. He's a good professional and a fantastic kid in the dressing room.

"Derby defended very well. They changed players as the Championship is important to them. Scott Carson played well and the post played well for them. They were close to a replay - but they didn't need it.

"The Championship is coming in a direction where they are Premier League level, they just play in another competition."

Derby boss Gary Rowett to BBC Sport: "The lads worked incredibly hard and had to against a star-studded line-up. I think they showed us respect with the line-up they put out.

"We stuck at it and rode one or two moments of luck and started to get ourselves into the game. After weathering the moments out then you could hang on for the draw or nick one.

"We spoke about having no pressure but really for me it was a test to see who could handle it.

"We moved the ball with confidence and control. Of course it was fleeting but when we exerted pressure I thought we caused Manchester United uncomfortable moments.

"I think it was a more important game for Manchester United than it was or us. We're second in our league and that's our only focus really."

Manchester United now have 10 days until their next game - a home Premier League match with Stoke City on Monday, 15 January (20:00 GMT). Second-placed Derby are away to Birmingham in the Championship next Saturday at 15:00 GMT.