Ramadan Sobhi's second-half equaliser earned a precious Premier League point for Stoke against Huddersfield in an entertaining encounter at the John Smith's stadium.

Tom Ince gave the Terriers a deserved lead after 10 minutes when he side-footed in Collin Quaner's pull-back from close range.

Stoke should have scored in the first half, but Danish keeper Jonas Lossl made a stunning one handed stop on the goalline from Eric Maxim Choupo-Moting's overhead kick in the 27th minute.

Huddersfield dominated after the break, but Stoke equalised when Joe Allen squared to the arriving Sobhi at the far post and he tapped home on the hour mark.

Both teams had shouts for penalties, with Huddersfield's Aaron Mooy and then Stoke's Mame Biram Diouf going down in the area under heavy challenges.

Stoke move up to 13th, three points off the bottom three, while Huddersfield stay 11th.

The Terriers impressed in attack.

Australian midfielder Aaron Mooy was excellent in midfield, while Collin Quaner and Rajiv van La Parra were a constant threat on the wings.

They had 18 shots in the match, including 10 in the second half, but it will concern manager David Wagner that they did not convert their chances.

And it will be keeper Lossl who will take many of the plaudits following his wonder save.

It came from a Stoke corner, with Lossl first keeping a Kurt Zouma header out and then recovering to prevent Choupo-Moting's shot from crossing the line, clawing the ball off the goalline and onto the post before smothering the rebound.

Goalline technology replays showed the ball was just millimetres away from being a goal.

"I needed a bit of luck in that situation," the keeper said after the game.

Potters boss Mark Hughes said: "How that hasn't gone in, I have no idea." 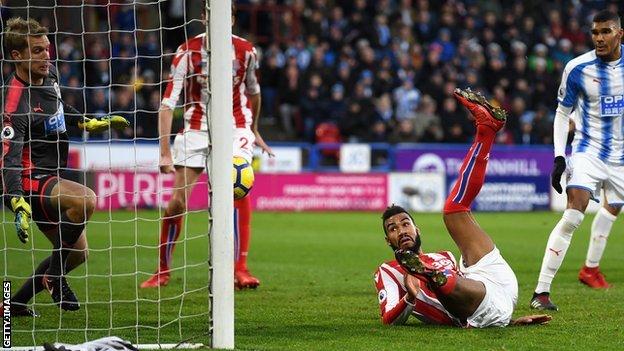 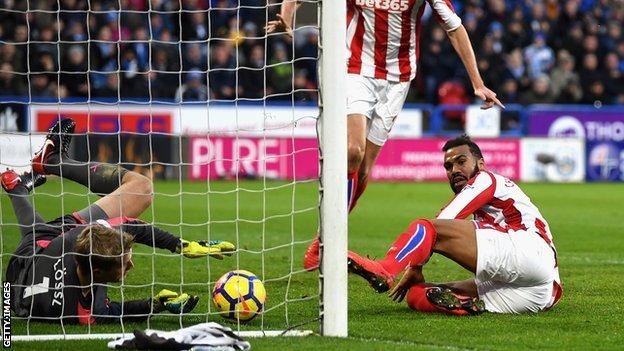 Last week's win against West Brom had lifted the pressure on Hughes and he fielded an unchanged side as he sought to build on that victory.

The Potters' defence has been an issue this season, having conceded 40 Premier League goals prior to their Boxing Day trip.

Goal against number 41 duly arrived quickly, and they have kept just two clean sheets in 20 league games this season.

England goalkeeper Jack Butland produced a few shaky moments in goal, dropping a cross and making a hash of a clearance, but kept the Terriers at bay in the second half and made seven saves in the game.

He also had to contend with one of the worst back passes of the season when Allen hacked the ball towards him, and the keeper was forced to concede a Huddersfield corner.

An injury to captain Ryan Shawcross after 30 minutes was a further blow to the Potters' defence.

Stoke did look dangerous in attack, especially from set pieces as ex-England striker Peter Crouch threatened, while Allen did well at 10, supported by Shaqiri and Choupo-Moting.

Their defence improved after the equaliser, but they were also helped by the Terriers, who were wasteful in front of goal.

Hughes will be happy to have earned a point but his team's away form will continue to be a concern, having won just one game in 10 on the road.

Man of the match - Aaron Mooy

What they said? - 'We showed can can compete with established sides'

Huddersfield boss David Wagner: "I'm very pleased with the performance. We were aggressive and controlled the open play, but they were dangerous from set pieces and scored too.

"Maybe 1-1 was a fair result, so we accept it. When you invest so much and create such good situations on the wings, you hope for more clear cut chances. We performed well, though.

"It was a very intense game played in a great atmosphere. We have seen that we can more than compete with an established Premier League side like Stoke City".

Stoke manager Mark Hughes: "It was a little bit to and fro and you could argue we had more clear cut chances. We created some good moments. After their goal we kept at it, pushing and asking questions. We showed good desire."

On his injury problems: "It is not easy at the moment, but we are getting through it. The lads are giving me everything and getting points."

Huddersfield welcome Burnley on Saturday, while Stoke travel to Chelsea - both games are at 15:00 GMT.

Stats - Ince's goal drought is over