Manchester City's snowballing winning form shows no sign of letting up as we head towards Christmas.

The Premier League leaders pulled apart Swansea on Wednesday to extend their record for successive top-flight victories to 15.

They have an incredible 49 points and Pep Guardiola's side have only once failed to win in the league this season when they were held to a 1-1 draw against Everton way back on 21 August.

But how does this run rank against those in the history books and from other pages on the footballing atlas?

Whichever era of football you choose, whichever of the four top tiers you pick, no English team can match the pace set by City this term.

Dreaming of a Blue Christmas?

City have already hit great heights this season, but if they win their two remaining games before 25 December then City will have climbed even higher with the best points average of any top-flight side in the history of English association football - 2.89.

*These teams received two points for a win which we converted to three points for the sake of this comparison table.

What about the all-time English winning runs?

Arsene Wenger's Arsenal side of 2003-04 still carry the tag of the 'Invincibles' having gone through their league campaign unbeaten. But his side's winning run of 2001-02, which carried over to the 2002-03 season was broken this season by City, who also now hold the record for the longest winning run in any of England top four tiers.

When is the earliest the title has been won?

Cast your minds back to the 2000-01 season when the all-conquering Manchester United, led by Sir Alex Ferguson, waltzed their way to the Premier League title with five games to spare.

When speculating when City would cross the line is dependent on where their rivals are at the time. Currently, second-placed United are 11 points behind City and have a -15 goal difference.

If the same gap is retained throughout the season - assuming they draw when they meet on 7 April - then City would clinch the title with three games remaining.

Is the rest of the Premier League inferior? 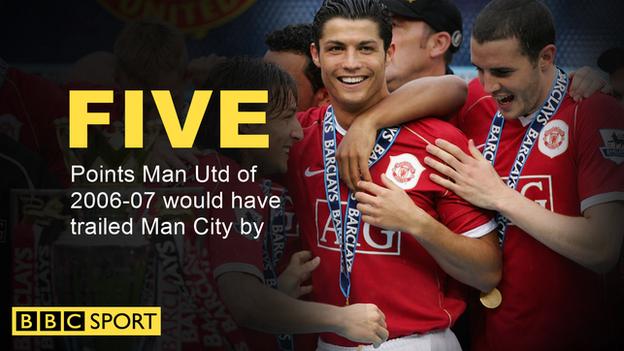 If we focus on the team in second, the 13-time Premier League champions Manchester United, then their current points total of 38 is only their ninth best in 26 Premier League campaigns. The United of 2006-07 had 44 points after playing their 17th game.

When Chelsea won the title last season they had 43 points at this stage, whereas this campaign they only have 35.

Have City markedly improved or have their rivals' standards dropped?

Could City become the best in Europe?

First England, now the world. Well, Europe at least. City are closing in on on the continent's best ever. Including two managed by Guardiola.

One of the best we've ever seen?

That was the question asked of the Premier League's all-time record goalscorer Alan Shearer by host Gary Lineker on Wednesday's Match of the Day.

"I don't think there is any doubt about that, and top players in that team, with hunger and desire to put in a performance week in, week out," said Shearer. "It has to has to be admired."

Match of the Day commentator Jonathan Pearce was glowing in his praise.

"There have been great teams in the modern era but, in terms of fluent football and as an irresistible force, Manchester City are the best the Premier League has ever seen," he said.

"I've never seen a team in all my years play like this."