Willian opened the scoring, capping a fine team move which resulted in Cesc Fabregas squaring for the Brazilian to tap home.

Bournemouth thought they had forced extra-time when Dan Gosling curled home from the edge of the box in the final minute after being picked out by Jordon Ibe.

But substitute Morata sent Conte's team into the last four when he finished from Eden Hazard's backheel.

Chelsea will play Arsenal in the semi-finals, hosting the first leg in the week commencing 8 January. The second leg is two weeks later. Manchester City play Bristol City in the other tie.

Conte said: "To play 30 minutes more would have been a bit dangerous. We had a great reaction. It's not simple to concede a goal in the last minute of the game.

"When you have this reaction, it means you have players with great character and heart." 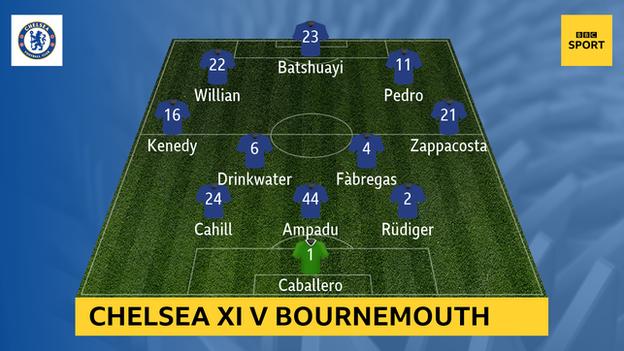 All seven Premier League teams in the quarter-finals made wholesale changes, an average of 8.3 per side. And Chelsea were no exception, making eight switches from Saturday's 1-0 win over Southampton.

The Blues will be delighted to be in the semi-finals of a cup they have won five times, although an experienced team of fringe players did not do much to stake a claim for a Premier League spot. Teenager Ethan Ampadu, one of only two players in the team aged 21 or under, was impressive at centre-back, though.

Striker Michy Batshuayi and Kenedy were both involved in the goal for Willian, one of the few Premier League regulars in the team, and both recalled players missed chances.

Batshuayi was denied by a couple of last-ditch Steve Cook interceptions in the first half, with left wing-back Kenedy screwing a shot well wide after winning the ball from Adam Smith on the halfway line.

The Blues sat back in the second half, and invited pressure from Bournemouth.

Conte was obviously not too impressed with what he saw, and brought on Hazard, Tiemoue Bakayoko and then Morata in a bid to turn the tide.

And it was his star players who sent them into the last four. Moments after Bournemouth's equaliser, Morata let a ball forward run to Hazard and moved towards the penalty spot, where he received the Belgian's backheel before firing past Artur Boruc.

Conte said: "Last season, we were eliminated in the fourth round by West Ham. This season we must be happy with this achievement in reaching the semi-final of one of the two cups in England.

"I had good responses from my players. In this cup, they showed they are very professional. I hope this game also improves the physical condition especially for the players who had injuries and who are not playing with regularity. It means we are working very well."

Perhaps if Bournemouth were comfortable in mid-table, they could have given the EFL Cup a real crack this season. But the Cherries sit just one point above the relegation zone - and manager Eddie Howe decided to rest players with the festive fixtures in mind.

Jermain Defoe was one of the four players to keep his place from the 4-0 defeat by Liverpool, but hobbled off following Ampadu's mis-timed first-minute challenge. Howe confirmed after the game that the veteran striker has suspected ankle ligament damage.

The Cherries offered little in the first half - although Lyn Mousset headed at goalkeeper Willy Caballero and Ibe shot wide after Willian had mistakenly waited for a free-kick to be awarded.

They caused more problems after the break, with Mousset having a shot deflected for a corner, Lewis Cook firing over and Ibe firing wide after Callum Wilson found him following a slick team move.

Bournemouth deserved their equaliser when Gosling scored from 20 yards - but their joy lasted precisely 75 seconds with Morata scoring a late, late winner.

Howe said the defeat was "heartbreaking".

"The players gave everything," said the Cherries boss. "In the second half, we had waves of attack and we scored, but the last part of the game is bitterly disappointing.

"I think we're experienced enough to know, but it's just one of those things. The most positive thing is that our players continued to dominate the ball."

Analysis - 'there would have been questions had Chelsea lost'

Maybe Bournemouth thought they were going to extra-time and switched off a little bit. But Chelsea had other ideas. When you have Eden Hazard, anything can happen.

Bournemouth were really good in the second half and deserved their equaliser; they put Chelsea under a lot pressure. Hazard and Morata came through for them.

To win a cup, whichever one it is, is important. The weight of expectation is enormous at Chelsea. You're expected to win every trophy. There would have been questions asked had they lost. Chelsea aren't used to losing.

The problem for Bournemouth is they've shown glimpses like that this season but they can't maintain it. In the second 45 minutes, they were exceptional - rejuvenated, a different side. They had to throw everything at it and they did. Now it's over with they've got to put it to bed and focus on the Premier League.

"After one minute and 40 seconds the referee decided to book a player who is 17 years old. Ampadu played the whole game with this problem. That's not easy. He had to play 93 minutes with this danger, but he showed great maturity and personality.

"I have spoken about this player before in an enthusiastic way. Despite his young age, he is showing great maturity.

Chelsea go to Everton in the Premier League on Saturday at 12:30 GMT, although they will be without Morata, whose booking for celebrating his goal means a one-game suspension.

Bournemouth are away to unbeaten leaders Manchester City at 15:00.