We saw Manchester City destroy plenty of teams earlier this season but they are now showing some of the other qualities you need to win titles.

I won the Premier League six times with Manchester United between 1996 and 2003, and our ability to keep going right until the end of matches to score decisive late goals was a far bigger factor in that success than the attacking football we were renowned for.

That was how our manager Sir Alex Ferguson viewed it, because it meant he had a team that would never give up. We would fight for each other until the end.

There are signs that the same thing is happening at City under Pep Guardiola too.

It is not just the way they dug deep to win three Premier League games in the past week through goals in the final few minutes, to maintain their eight-point lead at the top of the table.

Their 96th-minute winner over Southampton on Wednesday saw not just the whole team on the pitch, but also Guardiola, his coaching staff, substitutes and the rest of the squad celebrating together.

That was always a big thing at United - we always made sure we did it to show our team spirit and togetherness.

This week, as well as continuing their brilliant winning run, I think the City players have demonstrated their character and unity more than at any other time during Guardiola's time as manager.

It must be a big worry for the rest of the Premier League. We are getting to the point where you start to wonder if anyone is actually capable of turning City over.

You know what is coming in the last 10 minutes

If you speak to anyone who played against United during my time at the club - between 1995 and 2005 - then they knew what was coming if they were ahead or level against us going into the final few minutes of a game.

We knew too. So did the crowd, and the whole world watching on TV. We did it every time - we would throw everything at the opposition and, a lot of the time, we would score.

That is what it feels like now with City. Psychologically, it is a huge weapon to have.

As soon as City equalised against West Ham, in the 57th minute, everybody on the pitch and in the stadium knew what would be coming in the closing stages if the score was still 1-1 - including the West Ham players.

Against United, a lot of teams would sit back and defend in numbers in the way the Hammers did at Etihad Stadium on Sunday, especially when they came to Old Trafford.

But you get used to it. If they were well-organised, we knew we had to find a way to beat them and, as part of that, we knew full well we had to use the full 90 minutes to do it.

So patience becomes part of your gameplan. Yes, we would still come out of the traps fast and go for an early goal but even if a team was causing us problems we would never panic.

Instead we would be thinking, 'let's get to the last 10 minutes because then they will fall apart when we increase the intensity'.

With 80 minutes gone in games, we still thought we had bags of time. Even if it got to 87 minutes and we were still chasing a goal then we used to say to ourselves: 'We will create two more chances.'

If you get that late in a game with something to protect against most teams, you would probably be confident of seeing it out - but United were different, and it is the same for City now.

How do City do it? By wearing the opposition down

When some managers need a goal with 20 minutes left, they chuck a big man up front and change to a more direct style.

But City's players have total belief in what they are doing, so they do not need a Plan B.

Guardiola will put more attacking players on the pitch, but not taller or bigger ones.

City never resort to hopeful balls forward - they keep on passing and probing, because they know full well that chance will come.

In each of their wins in the past seven days, they wore the opposition out by working the ball out to the left, then to the right, then back again.

It becomes impossible to stop them from creating chances, no matter how diligent a defender you are.

You have to match each movement made by the player you are marking, and you have to keep sprinting to the ball until, eventually, you can sprint no more.

Lapse for a second, and that is it. Young West Ham defender Declan Rice had a great game on Sunday but he did not quite stay with David Silva in the 83rd minute.

In front of him, nobody pressed the ball quite enough when it came to Kevin de Bruyne on the edge of the area.

A chip into the box and - bang - that is it. City have scored and won the game.

Who can stop City? I see only one team good enough

West Ham could come off the pitch on Sunday thinking they battled hard, played well and they had chances - but they lost.

Huddersfield and Southampton were the same - they did brilliantly, but they were still beaten.

At the moment, with City on a Premier League record-equalling run of 13 straight wins, it is hard to see a situation where they drop any points, let alone lose a game.

They are a phenomenal team and when I think about who there is in the league who is good enough to beat them, I see only one side - United.

We will find out if that is the case at Old Trafford on 10 December. 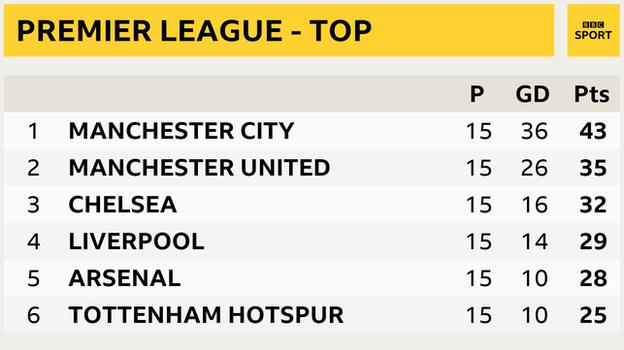 City do have weaknesses, of course. Huddersfield and West Ham both scored against them at corners, and Southampton should have done twice.

But none of them went toe-to-toe with City, flooded their half and pressed them high up the pitch.

All three of those teams set themselves up to survive - staying deep and getting men behind the ball then creating something from set-pieces.

It worked, and almost brought them a reward, so you wonder if a team with United's extra quality and pace on the break would do even better using the same cautious approach.

To have a chance of inflicting City's first defeat of the season, or even stopping their winning run, United probably have to do that, rather than go on the attack.