David de Gea's performance was the "best from a goalkeeper in the world", according to Manchester United boss Jose Mourinho after his side's thrilling 3-1 win at Arsenal.

The Spaniard made 14 saves, equalling the record since statisticians Opta began collecting data.

"You need the keeper to be there for you when the team needs," added Mourinho.

Wenger's side fired 33 shots at goal, with 15 finding the target. The United resistance prompted the Frenchman to state De Gea was "man of the match by a clear mile". 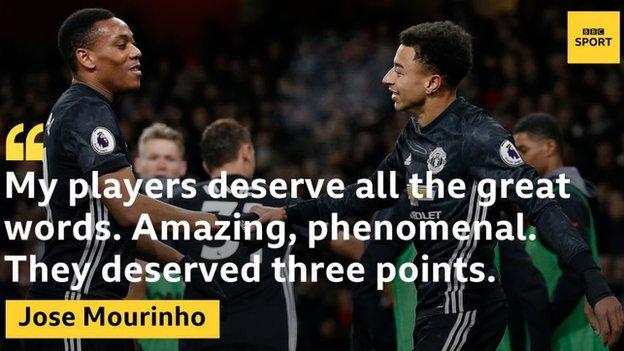 Only Tim Krul - for Newcastle against Tottenham in 2013 - and Vito Mannone - for Sunderland at Chelsea in 2014 - have recorded 14 saves in a game since Opta began gathering this piece of data in 2003-04.

Most remarkable of all was a double De Gea save to deny Alexandre Lacazette and Alexis Sanchez with the score at 2-1 early in the second half.

De Gea played down his role, saying it was simply a "good game for me" before focusing on the "confidence" United can take into next week's Manchester derby at Old Trafford.

Mourinho added: "I told De Gea after the match, what I saw today was the best from a goalkeeper in the world.

"I loved the way my team played and fought. Arsenal played in some period amazing attacking football - creating difficulties for us.

"But I have to say that my players deserve all the great words. I don't know so many in English but amazing, phenomenal, fantastic. They deserved three points."

The attitude was impeccable - Wenger

Goals from Antonio Valencia and two from Jesse Lingard either side of Lacazette's strike moved second-placed United to within five points of their city rivals.

They comfortably held on despite Paul Pogba being sent off for a dangerous challenge late on, punishing Arsenal for early defensive mistakes.

"Despite being 2-0 down we should have come back - we had enough chances," said Wenger, whose side are now fifth.

"It was a big blow to go 2-0 so early on - especially at home. We were too on the edge mentally maybe - you cannot be in a game like that.

"We played well but there is nothing more frustrating when you have that quality of performance and nothing to show for it at the end. The attitude was impeccable until the end. But you cannot make the mistakes we made at the beginning."