England manager Gareth Southgate will be quietly pleased with our draw for next summer's World Cup but let's not get carried away - we have been here plenty of times before.

We talk about good draws and bad draws before every major finals, yet nothing ever materialises for England and history tells us that things can go horribly wrong.

So, although we are in a decent group, I am not going to start plotting our way through to the latter stages just yet. 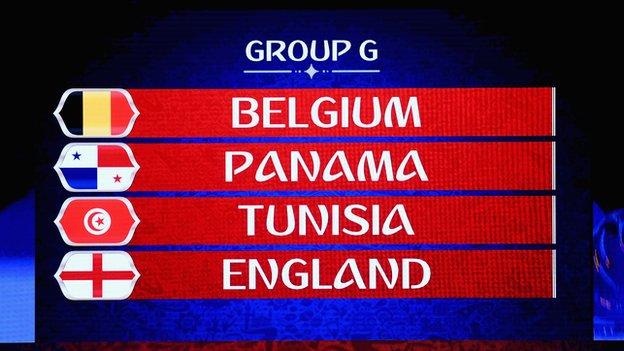 We have not won a knock-out match at a tournament since we beat Ecuador in the last-16 of the 2006 World Cup, which is part of the reason expectations are so low from the fans right now.

I know there are no big-hitters waiting for us in the last-16 this time, which is another positive - we would play Poland, Colombia, Senegal or Japan if we get through - but I think we have to be realistic and realise where we are at as a team.

Yes, we have a great record when it comes to qualifying - we have not lost any of our last 39 matches, going back to 2009 - but since the 2010 World Cup, our record at finals has been poor.

That's why we should concentrate on getting out of our group first before we worry too much about who we could face in the next round, because doing that has been difficult enough in the past.

Belgium can bring the best out of England

It will be key to get off to a good start against Tunisia, which brings back happy memories for me of scoring when England beat them in Marseille in our opening game at the 1998 World Cup.

In tournament football, it is always hugely important not to lose your first group match - but I think we have got a great chance of winning it, which would give us plenty of confidence.

As Gareth says, he does not know much about Tunisia or Panama. The homework on them starts now, and he will make sure the players are fully prepared.

But he will already know everything about Belgium, who we face in our final group game.

We see their stars like Kevin de Bruyne, Eden Hazard and Romelu Lukaku showing off their brilliant skills in the Premier League every week, and that is going to be an extremely tough match.

It is one I am really looking forward to, though, and it might be a game that brings the best out of England.

Historically, I think we have always put our better performances in against the best teams, and facing Belgium will focus the minds of all the players, whatever has happened beforehand.

If players show what they are capable of, people will be happy

I do not think England will go to Russia and win the World Cup because I do not expect us to all of a sudden go from being terrible to being world beaters.

But what I am expecting to see is some improvement and signs of progress.

That should not be hard because we have been dreadful in recent tournaments, and our performances and results have been hugely disappointing.

By improvement, I mean winning games - and in two of our group games, against Tunisia and Panama, we should have a hell of chance of doing that.

But what I really want to see is our players showing what we know they are capable of, because it has not happened often enough in games at major finals in the past few years.

If we get knocked out and can come away saying we gave our best and it was not to be then I think people at home would be happy.

But we cannot go out of the tournament the same way we did in France. Our defeat by Iceland was an embarrassment which left a lot of people angry, and rightly so.

Southgate has a system he will stick with

One of England's issues before Euro 2016 was that we did not have a set system going into the tournament.

Roy Hodgson tried a midfield diamond in the build-up to the tournament, then used a 4-3-3 when it started.

Even after the group stage had finished in France, it did not feel like Hodgson knew which formation he wanted to play, or what his best XI was.

In contrast, I think Gareth Southgate is committed to using three at the back next summer. A lot of his players are using it with their clubs, so he knows how comfortable they are with that shape, and how it plays to their strengths.

Gareth still has some selection issues to sort out, of course.

He has got a few options with his full-backs while the big question mark is over the goalkeeper situation because Joe Hart is not having a good time of it at West Ham right now.

And I am sure he will continue to give younger players a chance between now and the tournament. He will certainly be monitoring them, but it is up to them to make him look at them.

But he has got time to work all of that out - there are 195 days to go until the World Cup starts.

All the players will have been sitting at home glued to the TV watching the draw, just like I did when I was a player.

Now they have got six months to impress the manager and make sure they are on that plane.

How will England's group finish?

Pick the order teams will finish in England's group