Burnley's impressive Premier League season continued as they climbed to sixth in the table with victory over Bournemouth at the Vitality Stadium.

Chris Wood's first-half tap in set Sean Dyche's side on their way to a fourth victory in five league games.

Robbie Brady added a well-taken second from a counter-attack as Burnley moved above Tottenham in the top flight.

Joshua King smashed in from close range for a Bournemouth consolation, but the hosts offered very little.

Eddie Howe's side remain four points above the relegation zone after a first defeat in four Premier League games.

5 Live Football Daily: 'A day we'll remember for the rest of our lives' - Guardiola 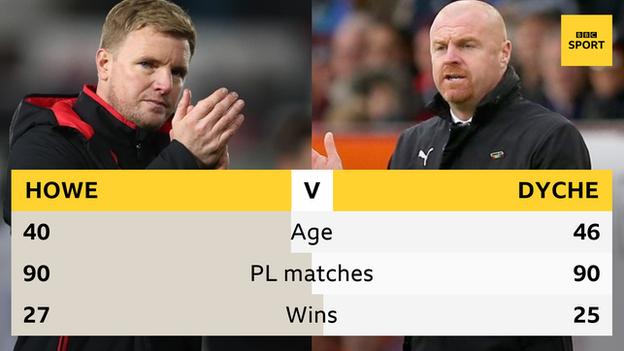 With veteran manager Sam Allardyce set to be appointed Everton boss and well-travelled Alan Pardew taking the West Brom job, the debate around whether younger British managers are given a chance in the Premier League has again come to the fore this week.

Burnley's Dyche and Bournemouth's Howe are the two go-to names for those who argue that less experienced British coaches deserve more opportunities.

The pair met at the Vitality Stadium in what was the 90th Premier League match for each of them, but that was where the parallels ended.

Howe's Cherries side have forged a reputation for playing attractive football, but it was Dyche's Burnley with their direct, disciplined approach that proved far more effective.

The Clarets looked to get the ball wide and deliver crosses into the box, with Wood heading on to the crossbar and then forcing Asmir Begovic into a fine save before he opened the scoring.

It came after Jack Cork won possession in Burnley's attacking third, shifted the ball left to Brady and the Republic of Ireland international cut into the box before watching his shot ricochet into Wood's path for a simple finish.

Brady then doubled the Clarets' lead with 25 minutes to go when he finished a fast-flowing break with a superb right-footed finish from the edge of the area.

Having avoided the drop with a 16th-placed finish on their return to the Premier League last season, boss Dyche would surely have been pinching himself at the suggestion the Clarets would be flirting with a European spot heading into December.

But it was an assured performance at either end of the pitch from Burnley, denying Bournemouth a shot on target until King's consolation 11 minutes from time.

No birthday luck for Howe

Bournemouth boss Howe said he was not giving his 40th birthday "a minute's thought", concentrating instead on the visit of his former employers to the Vitality Stadium.

Howe has spent nearly a quarter of his life as a manager, guiding the Cherries to three promotions since first taking charge in League Two, but this will be among the performances he would like to forget.

The Cherries were flat, lacked tempo and failed to stretch a well-organised Burnley defence until late in the game.

They improved once Howe brought the experienced Jermain Defoe on, and it was the striker's movement that led to Bournemouth's late reply.

Defoe reacted quickest to a bouncing loose ball in the area, firing across goal for King to finish at the back post in the Cherries' only real chance of note.

'Everyone will be surprised by our position'

"The responsibility lies with your team, they are difficult to play against and to score against. Going into the game I expected a quick game from us and we didn't get that, you want to give the crowd something to cling on to and they didn't get that."

Burnley manager Sean Dyche: "We were very dominant, hit the bar, made the keeper work and scored a fine goal.

"Where we are in the league, everyone will be surprised by that. I see the players work all the time and have great belief in this squad."

Burnley enjoying life on the road - the stats

Burnley travel to Leicester City in the Premier League on Saturday (15:00 GMT), while Bournemouth host Southampton on Sunday (13:30 GMT).