England manager Gareth Southgate said his young side rewarded him for his "brave" team selection in their hard-fought goalless draw with Brazil in the friendly at Wembley.

Southgate made five changes to the team that started the 0-0 draw with Germany on Friday, giving Liverpool defender Joe Gomez a full debut and introducing Dominic Solanke as a substitute for his first cap.

"It gives me plenty to think about," Southgate told BBC Radio 5 live. "We are in the early stages of piecing this team together and it gives me huge heart.

"We took some brave decisions and, goodness me, the young players have rewarded me with some top performances."

Brazil's greater quality and assurance in possession meant England spent much of the game on the defensive.

It gave Gomez the opportunity to demonstrate his quality with an outstanding display as part of England's three-man central defence, while goalkeeper Joe Hart made crucial second-half saves from Philippe Coutinho and Paulinho.

England found chances a rarity, although Liverpool striker Solanke almost made it a dream debut in the closing seconds, only to miscontrol at the far post.

Southgate's side were second best for the most part but can take heart from emerging undefeated from two goalless draws with World Cup holders Germany and Brazil in this international break.

"In terms of heart, resilience and spirit it was up there with anything I've been involved in," he added to ITV Sport.

"We couldn't get hold of the ball and keep it. Tonight we just showed resilience, guts and some outstanding defending and I'm incredibly proud."

England's experimental line-up will have realised early on that this would be a long, hard slog against the multi-talented Brazilians with great strength in their starting line-up and on the bench.

And so it proved as, with Neymar showing sleight of foot and flashes of genius, they spent much of the 90 minutes at full stretch in defence, fighting for any semblance of possession and put under stress by Brazil's pressing game.

It is to Southgate's side's credit they kept Brazil at arm's length for much of the game, aided by some uncharacteristically wayward shooting from the visitors.

Brazil's comfort in possession and natural skill gave England's unfamiliar-looking line-up a taste of the sort of quality they will be confronted with in Russia next summer - and while it was, in parts, a sobering experience it was also an invaluable lesson.

Gomez and Rashford shine for England

This was a learning curve for England's team - and especially the younger element Southgate is so keen to test as he formulates his World Cup plans.

And in Liverpool's Gomez and Manchester United's Marcus Rashford, he had two emerging talents who did themselves great credit in what was, for England at least, a largely attritional night at Wembley.

Gomez got his chance with Gary Cahill sidelined and took it superbly with an assured performance as part of a three-man defence Southgate now looks certain to use at the World Cup.

The 20-year-old started life as a central defender at Charlton Athletic and even though he has been used on the right side of defence by Liverpool manager Jurgen Klopp he slipped back into his old routine with real aplomb, showing his awareness with a series of crucial interceptions.

Rashford showed the fearless streak Southgate so admires with his constant willingness to run at Brazil's defence with pace, even demonstrating on occasion footwork that would not have been out of place from members of England's illustrious opposition.

Brazil may not have brought goals to Wembley but they brought atmosphere, colour and glimpses of skill that always makes them welcome visitors.

From the Samba band and colourfully-clad dancers that made a lap of Wembley before kick-off - even prompting some neat moves from one or two Brazilian journalists - to the roars of delight every time Neymar got on the ball, it was still a night that contained entertainment despite the increasingly low-key fare on the pitch.

Brazil provided a different test from Germany and gave England lessons Southgate will store before he gets his squad together again for friendlies against the Netherlands in Amsterdam and at home to Italy in March.

Man of the match - Joe Gomez 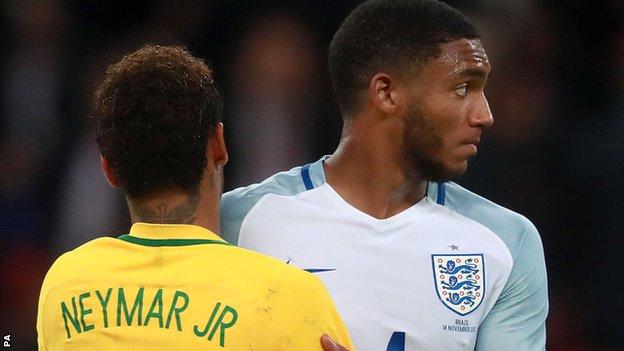 Analysis - a high-quality test for Brazil

It's a good time to have a disappointment. It was a high-quality test for Brazil, the first time they have played against European opposition in this cycle.

They have swept through a poor qualifying group but trying to break down the English defence proved much harder. From a Brazilian point of view it looked like a potential knockout match in the World Cup, where the opponents are happy to sit back,

England nearly won the game in the space behind Marcelo so Brazil have a few things to dwell on.

It wasn't Neymar's greatest game but Brazil already knew that their hardest games will be against the best western European teams in next year's World Cup.