Sheffield United manager Chris Wilder's lifelong devotion to the Blades is permanently marked by the tattoo he has sported since his days as a young supporter at Bramall Lane.

And while the 50-year-old laughs off a request to reveal the tattoo's exact whereabouts, his outstanding managerial record as he has moved up through the tiers is out in plain sight.

Wilder's league win percentage since taking charge of Sheffield United at the start of last season only stands behind reigning Premier League champion Antonio Conte at Chelsea and Tottenham's Mauricio Pochettino among managers who have been at the same club in that period.

The outcome has been spectacular, Wilder guiding Sheffield United to the League One title with 100 points last season and leading the Blades to third place in the Championship, two points behind leaders Wolves, before Friday's Yorkshire derby at Leeds United.

So who is Wilder, the manager finally getting recognition after years of success working his way through the leagues?

The Blade leading the Blades

Wilder, in the words of the chant from Sheffield United's fans, is one of their own. After two spells as a player at Bramall Lane in the 1980s and 1990s, fate and his successes have led him back after a full managerial apprenticeship.

A journey that started at non-league Alfreton Town in 2001 then took in Halifax Town, Oxford United and Northampton Town finally brought him home in May 2016 as successor to Nigel Adkins.

Wilder lives in the city, even happily taking public transport on his travels, and is immersed in the club.

Amid the buzz of Sheffield United's training base, Wilder told BBC Sport: "It has changed my life really. There is a massive expectation on me to do well from my pals and my family. It's gone great.

"Everybody realised it was a tough one to turn around but we've turned it around a lot quicker than we could ever have dreamed of.

"It's a fabulous club. My history with the club as a supporter has been talked about, but being on the inside I didn't realise what a good club it is and how big a club it is.

"It's waiting to take off and somebody was always going to get an opportunity and I've got mine."

Wilder never pursued his dream job, simply allowing his career to take its course. But after being linked with Sheffield United on several occasions he was finally able to walk through the door.

"It came out of the blue but when it came, when I was asked the question, I would have always been wondering 'what if?' if I hadn't taken the opportunity," he said.

Wilder's status was enhanced even further by the emphatic 4-2 derby win at Sheffield Wednesday in September - the day after his 50th birthday.

He remains firmly grounded - although admits the emotions of the game are made even more acute as manager of the team closest to his heart. 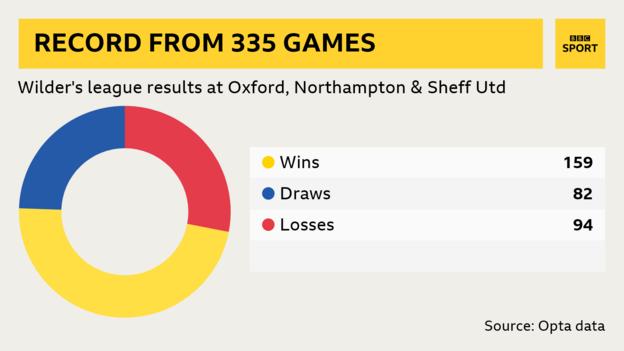 "I have always given 100% for every club I've been involved in," says Wilder.

"There is no getting away from it, though. The highs are a lot higher being here and on the flip side the lows are a lot lower.

"You have to, as every manager will say, keep calm and keep in a neutral place. It is a little bit more difficult here because I obviously feel it and being surrounded by family and friends that have followed the club for years, you feel their enjoyment or their pain."

Wilder still maintains his same lifestyle in Sheffield, saying: "Nothing changes. I'm one who will go and have a beer with my pals on a Sunday afternoon. I'll go on a Friday night and have an hour with my pals, lads that I've knocked about with for 20-25 years."

Travel though, has the usual modern challenges as he revealed: "I still live in the city. I still jump on the bus. The bus stopped the other day and the driver got out and asked to take a selfie. I think the other passengers were thinking 'what's happening here?'."

And Wilder admitted there were "ridiculous scenes" after that derby win.

It was almost a symbolic day of celebration for a club that has had a roller-coaster existence, not least since dropping out of the Premier League in contentious circumstances at the end of the 2006-07 season.

Sheffield United were relegated on the last day of the season as West Ham United stayed up with victory at Manchester United. The Hammers were later fined £5.5m for the handling of deals that brought Argentine duo Javier Mascherano and Carlos Tevez to Upton Park, the latter scoring the decisive winning goal at Old Trafford to save their status.

The Blades had an appeal against the decision not to dock West Ham points dismissed and have lived outside the top flight since.

Wilder said: "This isn't a club that's winning trophies year in year out so when the good times come you see what it means to people. You can say that about a lot of clubs but this is my club so I see it from the coalface."

And the tattoo? Wilder roars with laughter as he says: "It's still floating about somewhere."

Wilder's road to recognition has been a long one - but it has been signposted with regular successes since he took charge of non-league Alfreton Town in October 2001.

He was at the club for 27 weeks but managed to claim silverware, winning the Northern Counties (East) League Premier Division.

Wilder took one of the sleeping giants of the lower tiers back into the Football League in 2010 with a play-off win against York City at Wembley.

He left to join Northampton Town in January 2014, engineering a miraculous escape from relegation to the Conference before taking them up to League One in 2015-16 - the success that led to Bramall Lane.

Wilder remains a popular figure at both Oxford United and Northampton Town, where his heart-on-the-sleeve openness during a financial crisis when players and staff were not paid for several months earned the gratitude of supporters who still revere him.

He is remembered for an emotional pitchside interview after the Cobblers' win at Notts County in November 2015, when he pleaded for then chairman David Cardoza to complete a takeover from Wilder's former Oxford supremo Kelvin Thomas - the deal to save the club went through days later.

"My first job was at Alfreton Town and the chairman backed the club. He wanted to win so it made the job easier. I then went to Halifax, where I turned up and there was no balls, no training ground, no players. I had the other side of it."

Northampton was traumatic but Wilder emerged triumphant from another battle won by the hugely-personable Yorkshireman.

Recalling that period, he said: "There were people who had worked there for 20 to 25 years who were not getting paid for three months. You have a decision as players and people at a football club what direction you want to go in.

"For me there was only one way - you have to give it a go. You can't make any excuses. You're not going to be able to change it. You come out of it in a better light and better shape if you get your head down and try to work through it.

"I brought all the players in, told them about the plans. I had the responsibility there, as I did at Halifax.

"It was more difficult for the people that kept us going that gave the players the opportunity of going and getting results, like the press officer, the chief executive, the secretary, all the people in the offices who were not getting paid."

Wilder is shaped by those experiences, lessons he is putting into practice at Sheffield United.

"One thing I will never do is put this club in jeopardy, because I've had experience of other people over-spending, or mismanaging at the top, and I know what happens, people not getting paid and the like," he says.

"That's short term. If it isn't run correctly it isn't the players who suffer because they move and go on and get paid. It's the likes of the people who have worked here for 20 years.

"It will be done in a sensible, structured way."

"Old school is the new school"

Study Wilder's background and approach and the phrase "old school" is a constant narrative - a throwaway line he has no problem with, but one that damns his achievements with faint praise.

Wilder believes in togetherness and bonding with his staff and his experienced forward Billy Sharp recalled a moment that changed the momentum in the early days of Wilder's reign.

A despondent coach journey home from a late loss at Millwall was interrupted by Wilder stopping the bus and sending Sharp into an off-licence with orders to "get the beers in".

The ploy worked, the improved mood resulting in a long unbeaten run to spark the season into life.

The label "old school" can sometimes be a burden, as Wilder explained, but he is comfortable with it - while also embracing modern techniques.

"Other people might worry about that label," he said. "I think that might have stopped my progression at times but I mentioned at the League Managers' Association Awards last year that 'Old School Is The New New School' and a few of the older, more experienced Premier League managers like Sam Allardyce had a bit of a chuckle.

"I've got no problems with that because I think the game has moved on. If you come up here we are bang up with Prozone, heart rate monitors, GPS, video analysis, dieticians, psychologists.

"The game doesn't change though. You have got to outwork the opposition, out-run the opposition, then get on the ball and play in a way that people want to see you play and be positive with it.

"It's a competitive sport. I want to see people competing and wanting to win and the togetherness of the group, whether it is a new player coming in and having to sing on a Friday at an away game or the lads going out for a meal or meeting up."

And the basic principles?

"It's about recruitment, being honest, being straightforward, having good people all around the club and treating players like I liked to be treated."

What's next for Wilder?

Sheffield United have the chance to put another marker down at Elland Road - and the dream is for the lifelong Blades fan to take them into the Premier League.

It is early days but it is clear things are on the move at Bramall Lane after the barren years - and Wilder is a brutal realist.

"I know how the game works. Whether I'm from Sheffield and support Sheffield United or not, it is a tough industry and if you don't get results you're in trouble.

"I'm delighted we have put ourselves in this position, even though it is early on in the season. It is a big game and we want to get involved in them and relish being involved in them.

"There will be a full house at Elland Road, a cracking atmosphere, a great place to play football. These are the reasons we wanted to get in the Championship so don't take a step back - let's see how far we can take it."