More than 80% of ticket prices in the Premier League have been either reduced or frozen for the 2017-18 season, the BBC's Price of Football study has found.

However, replica shirt prices have continued to rise in the Premier League this season, with the average adult shirt now costing more than £50 for the first time, while the average cost of a junior shirt has topped £40.

Now in its seventh year, the BBC Sport study requested information from 232 clubs across England, Wales, Scotland, Northern Ireland and Europe, which is a wider remit than any previous years.

For the first time, we also asked clubs to provide information on whether they offer special ticket prices for young adult fans aged between 16-24.

Premier League away fans are still guaranteed to pay no more than £30 on their travels after a price cap was introduced last season.

The average cost of the dearest adult away ticket comes in at just under £30, with some clubs opting for further reductions - Southampton charge £20 for all away fans visiting St Mary's.

"The hard work of clubs to make Premier League football available to a range of supporters, combined with the impressive commitment of match-going fans, has resulted in record stadium occupancy of more than 96% for three consecutive seasons."

The average cheapest season ticket prices offered by clubs is down, from £472.75 to £464. The most expensive average season ticket is also cheaper this season, down just over 2% from £864 to £843.58. That brings the average down to levels lower than in 2013.

Supporters are also paying more for food and drink at Premier League grounds.

More than half of clubs increased the price of their pies, while the average cost of a cup of tea has also gone up. 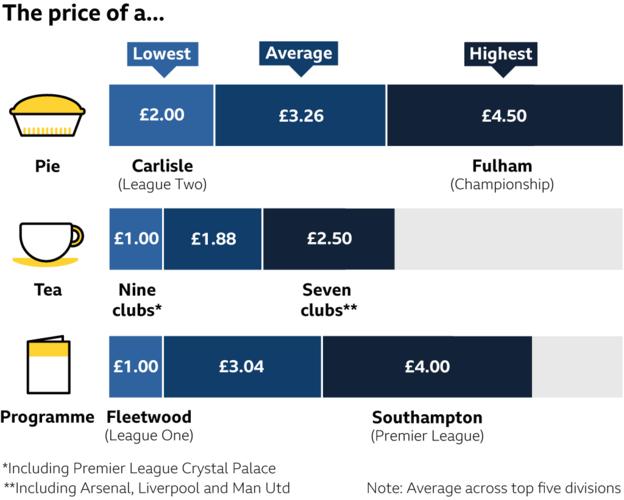 Newly-promoted Huddersfield Town offer one of the cheapest season tickets across the English and Scottish leagues.

More than 4,000 fans benefited from the chairman's 'Premier Pledge' this year, paying just £100 to see all their home league games.

When Dean Hoyle took charge of the club in 2009, he promised that fans who held season tickets during his time as chairman would pay the reduced rate for the card if the club reached the top flight.

Huddersfield's most expensive season ticket is £299 - the same as the cheapest season ticket offered by any of the other clubs (Manchester City) - but the majority of season tickets were sold for £199. At £199, fans are paying £10.47 to watch each Premier League home game at the John Smith's Stadium.

The Yorkshire club's prices reduce the averages across the league, with their highest single ticket price for an adult home fan being £30 - the cheapest in this category in the league.

The Terriers have however increased the prices of their cheapest home (from £15 to £30) and away single tickets, along with pies, programmes and both junior and adult shirts since last season.

What else did we discover?

Premier League clubs are continuing to see the benefits of their bumper TV deal - which includes £5bn for domestic rights and another £3bn globally. Each top-flight club will receive a minimum of £100m.

In this year's study, we contacted 232 clubs across 23 leagues in England, Scotland, Wales, Northern Ireland and on the continent.

The cost of kits

What about other leagues?

How do European prices compare?

More than half of clubs in the Premier League increased the cost of their pies. Only West Ham reduced the price.

The average price rise for a pie this season is £3.65, up 4.58% - which is higher than the 3% rate of inflation for October 2017 as measured by the Consumer Prices Index.

The average cost of a cup of tea at a Premier League ground is £2.12. Arsenal, Liverpool and Manchester United charge the most for tea (£2.50).