Wales' 2018 World Cup hopes are over after James McClean's goal earned the Republic of Ireland a victory that sends them into the qualifying play-offs.

At a highly charged Cardiff City Stadium, the hosts controlled much of the first half but were frustrated by the stout defending and rugged physicality of their opponents.

The Republic grew in confidence after the interval and their abrasive approach paid off as Jeff Hendrick dispossessed Wales captain Ashley Williams and set up McClean to score with a thumping low strike.

Wales hurled bodies forward in a desperate late search for the two goals they needed to snatch the play-off place back from Martin O'Neill's side, but they found their route to goal blocked by an unflinching Irish defence.

Although the game lacked quality on occasions, the high stakes made for an absorbing encounter.

Only victory would have guaranteed either team a place in the play-offs, while a win coupled with a Serbia defeat - or draw in Wales' case - would have seen them qualify automatically.

However, Serbia's home victory over Georgia rendered that scenario academic and secured their passage to next year's tournament in Russia as Group D winners. 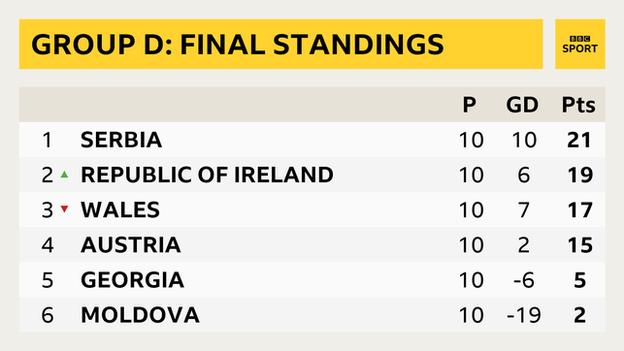 Another near miss for Wales

Before Wales' unprecedented success at Euro 2016 - reaching a semi-final at a major tournament for the first time - the history of Welsh football read like a catalogue of anguish and near misses.

A handball from Scotland's Joe Jordan denied Wales a place at the 1978 World Cup, they were a missed Paul Bodin penalty away from the 1994 tournament and a play-off defeat by Russia cost them qualification for Euro 2004.

Last summer's momentous achievement transformed all that, and it was the confidence fostered from their recent experiences which fuelled the belief that this would be their opportunity to qualify for their first World Cup since 1958.

The tone was set with an awe-inspiring rendition of the Welsh national anthem, with only the first few bars of Hen Wlad Fy Nhadau played before the home fans sang the rest unaccompanied and at a deafening volume.

The change in format came at the request of the Wales players and they appeared to feed off the fervent atmosphere as they seized control of the game in the early stages, enjoying as much as 80% possession and creating chances for Hal Robson-Kanu and Aaron Ramsey.

As they had done during March's reverse fixture in Dublin, a goalless draw, the Republic seemed content to defend deep and narrow, aiming to stifle their opponents with a combination of positional discipline and robust challenges.

One such coming together saw Wales suffer a major setback as their influential midfielder Joe Allen was forced off after a tackle by David Meyler, with a helping push from McClean.

That proved a turning point as Wales lost all rhythm and direction after Allen's departure - and the Republic of Ireland exploited that weakness ruthlessly.

Although Robson-Kanu had a header excellently saved by Darren Randolph shortly before McClean's winner, Wales did not have the creativity or craft to unlock a stubborn visiting defence and Chris Coleman was left to reflect on a heartbreaking end to a campaign he has previously said would be his last as Wales manager.

The Republic's gameplan pays off

Although some may point to the continued absence of forward Gareth Bale as a reason for Wales' inability to create chances as the match wore on, the Republic of Ireland deserve credit for their defensive resolve.

Even when Bale was fit in March, O'Neill's men managed to keep a clean sheet with a dogged display - and it was a similar tale on Monday.

They weathered an early spell of Wales pressure, played for long periods without the ball and eventually unsettled their opponents with their pressing and full-blooded challenges.

Their winning goal epitomised their approach, Hendrick closing Williams down and forcing the Everton centre-back into a sloppy mistake - before delivering a fine low cross, which Harry Arter stepped over in order for McClean to ram home a powerful finish.

It was fitting that McClean struck the winner, as the West Brom player had personified the Republic of Ireland's aggression, flying into tackles and snarling at his opponents.

O'Neill's team can now look forward to a first World Cup play-off since 2009's controversial defeat by France, notorious for Thierry Henry's handball which helped set up a decisive goal for the hosts in Paris.

Man of the match - Jeff Hendrick (Republic of Ireland)

'It hurts, but we will learn from it'

Wales boss Chris Coleman, speaking to Sky Sports: "We pretty much dominated the first half. We knew Ireland would have a gameplan and they executed it very well. Fair play to them.

"When we lost Joe Allen our creativity suffered. It was difficult to break down 10 men behind the ball. Martin O'Neill has done a great job and good luck to them.

"My players have given everything but it wasn't enough in the end to get over the line.

"We knew going into the last four games we would probably have to win the four of them. We got three but just at the final hurdle it was not enough.

"What we have done is another campaign where we have taken it right to the wire. Some you win and some you lose. It will hurt for a bit but you learn from defeat and we will learn from tonight."

Republic of Ireland manager Martin O'Neill, speaking to Sky Sports: "So proud. The players were magnificent playing away from home at a very good Welsh side. To win on their territory was a great result for us.

"That last half hour seemed an eternity. We had to withstand pressure but we knew at some stage we would have to try to win the game - and we did it. The goal was worthy of winning any game.

"We are in the play-offs. Whenever the draw is made we will take our chance.

"The impression of our campaign? Absolutely delighted. When the draw was made I thought we had a very difficult group. We have come through - fantastic."

Away day joy again for the Republic - the stats

The draw for the qualifying play-offs is on Tuesday, 17 October in Zurich. The first legs of the play-off will take place from 9-11 November with the return legs a few days later.