On Saturday, 20 February last year, Kyle Lafferty stopped off at a bookmaker's office in East Kilbride. A Norwich City player at the time, earning big money but in the wilderness in terms of first-team football - his last game had been a 3-0 loss at home to Manchester City in early January - Lafferty was in the bookies for just 35 minutes betting, and losing, on horses and dogs.

He had an overpowering need to have one more punt. He noticed that there were two games in La Liga that evening. Real Betis were playing Sporting Gijon and Celta Vigo were playing Eibar. He did a double on all four teams to score - and then left.

"I'd had a few winners the day before, so I had cash on me," Lafferty recalls.

"With the mindset I had, a grand was like a tenner. I knew it was against the rules to bet on football, but when you've got an addiction you just want to win that money back. I knew it was wrong, but I did it anyway."

The bet came in - but so did something else. A charge from the Football Association, then a hearing, then a guilty verdict and a £23,000 fine in August last year. The FA's commission thanked Lafferty for his honesty and wished him well in trying to confront his demons.

Lafferty, meanwhile, breathed a sigh of relief. While waiting for the hearing, he thought he might have ruined not just his chance to play for Northern Ireland in Euro 2016 - his goals were a massive part of why they got there in the first place - but also his career.

"The punishment could have been a lot worse," he says. "I was so honest they probably went easy on me.

"It was leading up to the Euros and I had all sorts going through my head, thinking I was going to be banned, but I'd have had no-one to blame but myself had that happened. I put my career on the line.

"The FA helped me. I spoke to the Sporting Chance clinic and I was seeing a guy in London every one or two weeks for an hour-long meeting about my gambling.

"That was the cowardly way of doing it. You can just show face and give the impression that you're looking for help and then half-an-hour later you're probably in a bookies on the way home.

"Now I'm ready to say I've got an addiction to gambling."

A little while back, Lafferty realised that he needed to confront this once and for all; for himself, his wife, Vanessa and his extended family. He wants to thrive with his new club, Hearts, and dreams of playing in the World Cup. Northern Ireland have already secured a place in the play-offs.

'Hearts have been incredible'

Austin MacPhee isn't just his coach at Tynecastle and with Northern Ireland, he's his friend. In MacPhee, Lafferty found somebody he could unburden himself to. Then he spoke to Michael O'Neill, the Northern Ireland manager, Craig Levein and Ann Budge at Hearts, and, most recently, John Hartson.

The former Celtic and Wales centre forward knows what gambling addiction is all about. He has spoken powerfully about his old life, a life he left behind six years ago when he placed his last bet.

"It's a lot for Vanessa to take in," says the Hearts striker. "Vanessa will tell you I don't like talking. I don't know what it is. I like keeping everything to myself, but the time has come now.

"This is the last thing Hearts wanted: another problem. I spoke to Austin after training a while ago. I told him how it's been, how much I've lost.

"I needed to speak to somebody and I knew I could trust him. His wife must have thought we were having an affair he spoke to me that much. Hearts have been incredible." 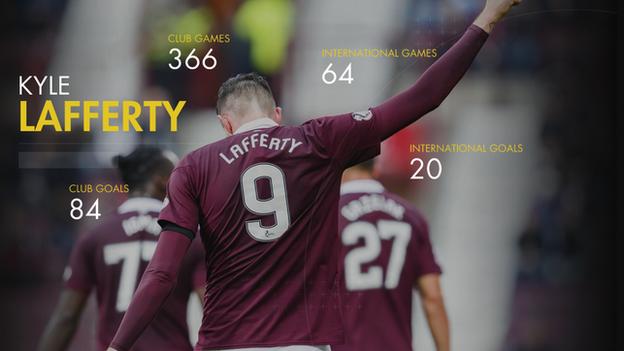 Lafferty, speaking quietly and intelligently, traces all of this back to his days hanging around amusement arcades in Northern Ireland, playing slot machines for a pound a time, first one in the door when they opened and pretty much last one out. He was 13 or 14.

He moved to Burnley as a young pro and dabbled in punting with the few quid he was getting, then dabbled some more when proper money started coming his way.

'I was betting on anything'

"About halfway through my contract with Rangers (he joined for £3m in 2008 and stayed until 2012) I didn't have anything better to do after training than go to the bookies or sit online," he says.

"Betting on football had been banned and, if anything, things got worse. I'd bet on horses instead. I knew absolutely nothing about horses. I still don't have a clue. I open the app on my phone and go by the colour of the jersey or the name. If it's a winner, it's a winner; if it's not, it's not, and I move on to the next one.

"It was every day on the horses and every single race. I was betting on anything; horses, dogs, virtual racing, roulette.

"I've been lucky enough to have a lot of team-mates who have looked out for me and tried to help me and to this day they're still trying to help me. I might listen to them for two or three hours.

"There's been times when I've lost big. I don't want to go into figures, but I've lost on the roulette and then I'd be so close to getting it all back. I might be a grand or two from getting it back and I'd keep on going.

"I'd be up two or three grand and I'd end up losing the lot. It didn't affect me at all because I knew I was about to get a move and there'd be a signing on fee or there was a bonus coming and it would make up for the money I lost.

"The thing is, I'm one of these people who could wake up in the morning and feel absolutely shattered, then I can flick a button and I'm hyper, I'm the clown and I'm doing the jokes. I'm taking my anger out on the training pitch. Football was my escape."

Lafferty praises Ally McCoist, his former manager at Rangers. McCoist did his best to help. "I might be focused and doing well for a month or two and suddenly I'd just get an urge and I'd want to hit it."

He tells a story about one betting company who closed his account down. He was being peppered with free bets, but only one firm recognised his problem.

"They sent a questionnaire about my gambling and I was very honest filling it in," he recalls. "I'd just lost a lot of money and I logged on one morning to go chasing it and my account was shut down.

"I absolutely devoured the guy down the phone. I was effing and blinding. The guy said they had to think about my health. I can see now that they were trying to help me."

'I'm going to take all sorts of grief'

Things have come to a head; the moment of realisation has dawned and the fight against addiction has begun in earnest.

"I feel lucky to be at Hearts with so many supportive people around me. Austin, Craig, Ann - what they've done for me makes me feel stronger this time," he says.

"Michael (O'Neill) has been brilliant as well. It's funny, I used to hate playing at Tynecastle when I was with Rangers. The fans were on top of you and there was so many of them.

"I'm glad we're on the same side now. I want to show them that I'm here to sort my career and my life out. If I don't go to meetings I know Austin will be on the phone and Craig will probably slap me across the head. I've got to sort this out.

"I know I'm going to take all sorts of grief off fans of other clubs. It's a big thing to do what I'm doing.

"I know Hearts fans and my team-mates will be behind me, though. I'm not talking about this because I'm looking for sympathy.

"I could have got help in private and nobody would have known about it. I want to do it publicly because I want to be honest and if there are any other footballers who are addicted to gambling, then maybe me speaking about my battle might help them."

As the saying goes, a journey of a thousand miles begins with a single step. Lafferty has now taken it. How far he goes is up to him.