Wayne Rooney's retirement from international duty - announced after England's all-time record goalscorer had been told he had won a recall at 31 - closes another chapter in his illustrious story.

Rooney, with 53 England goals in 119 appearances, left Manchester United to return to Everton this summer with his place in Old Trafford's history books also assured after he overtook Sir Bobby Charlton's club record with 253 goals.

He had been sidelined by Jose Mourinho at United, and also by Southgate with England, but such has been his early rejuvenation at Goodison Park that he was offered a place back in the fold for the forthcoming World Cup qualifiers against Malta and Slovakia.

Rooney, who originally planned to end his England career after next summer's World Cup in Russia, decided against a return and will now focus fully on Everton.

So how will history judge Wayne Rooney's England career?

Those of us fortunate to be in Portugal for the long, hot summer of Euro 2004 will remember the rise of this phenomenon and how Everton's 18-year-old became the most talked-about player at a tournament eventually won by rank outsiders Greece.

Rooney had made his debut, and become England's youngest player at 17 years and 111 days, in a defeat by Australia at Upton Park in February 2003.

But it was his deeds in Lisbon against France, where he gave an experienced defence a harrowing night in a 2-1 loss at the iconic Stadium of Light, as well as scoring twice against Switzerland and Croatia, that thrust him into the global spotlight.

Suddenly, the quiet youngster who played football from the streets was the name on everyone's lips. Calls to hotels and mobile phones were being fielded from around the world, seeking the story of the Croxteth boy who played in an untamed style that had suddenly transformed him into a superstar.

As someone who attended the same De La Salle School in Liverpool, it was easier for me to paint a picture of his working-class background and the environment that had shaped his development - on the school playground in Carr Lane East and in junior sides before joining Everton.

Rooney himself was largely protected from the mounting media attention, but his football did the talking.

Phil Neville, a fellow England squad member at Euro 2004, recalls: "I remember when he first got into the squad - the youthfulness, the bravery, the courage he showed, particularly at his first major tournament in Portugal.

"He was a breath of fresh air. No-one enjoyed playing for England more than Wayne Rooney."

This Euro 2004 episode ended in misery when Rooney broke his foot early in the quarter-final against Portugal, which England lost on penalties.

Many felt England would have won that tournament had Rooney stayed fit, but he had made an indelible mark - life would never be the same as he embarked on an international career lived under intense personal and sporting scrutiny.

In a BBC Sport poll, 51% of voters described Rooney as 'one of the best to wear the shirt'.

Rooney's stratospheric rise in Portugal sent expectation through the roof, his unstoppable blend of power, awareness and potency in front of goal leaving England fans hoping they had finally found the talisman to end the years of frustration since the World Cup win of 1966.

Sadly, this proved beyond not just him but a generation of world-class players such as Liverpool's Steven Gerrard, Chelsea's Frank Lampard and the likes of Paul Scholes and David Beckham from Manchester United. The 'golden generation' could not reproduce their consistent success at club level once in England colours.

Rooney's legacy will be coloured by his failure to make a mark on another major tournament. Not fully fit, he was sent off in another quarter-final defeat to Portugal at the 2006 World Cup, and was then the most obvious symbol of the frustrations felt inside the infamous 'Camp Capello' in South Africa in 2010.

Manager Fabio Capello's decision to keep England's players miles off the beaten track - when they threw open their bedroom windows there would not have been the slightest clue they were in Africa - seemed to particularly affect Rooney, someone who did not apparently need or enjoy downtime.

He described a typical day as "breakfast, training, lunch, dinner, bed", adding for good measure "there are only so many games of darts and snooker you can play".

Rooney's dark mood surfaced as he shouted criticism of England's supporters into a television camera following a horrific goalless draw with Algeria in Cape Town before England were thrashed by Germany in the last 16.

For all his effort - and you only had to listen to Rooney at close quarters to sense his desire and commitment - it simply never happened for him at another tournament.

Rooney missed the start of Euro 2012 through suspension after being sent off in a qualifier in Montenegro and while he was actually one of England's better performers at the 2014 World Cup in Brazil and at last summer's Euro 2016 in France, the abiding memory will be of abject humiliation on both occasions - failure to reach the knockout stage then a last-16 exit to Iceland.

Rooney scored just one goal in 11 appearances at World Cup finals from 21 attempted shots. It is a telling statistic for him, and for England.

The counterpoint to this is that only Gary Lineker (10) and Alan Shearer (nine) scored more than Rooney's seven goals for England at major tournaments.

But it seemed the harder Rooney tried the more this success eluded him, and when his England career is examined, it will be through the prism of these let-downs - something that still hurts enough to warrant a mention in his retirement statement.

And yet Sven-Goran Eriksson, the man who gave him his England debut, believes Rooney could have stayed on to make an impact at next summer's World Cup.

In giving a glowing tribute to BBC World Service, the Swede said: "If he goes on playing like he is now, scoring goals for Everton, then he could still have been an important player. If I was England manager I would do everything to convince Rooney to play at the World Cup then make a decision."

And he recalled the player he worked with as he said: "I remember when training was finished Rooney didn't want to leave the training ground. He wanted to stay doing free-kicks, shooting etc.

"He's tough, a great player, hard worker, has everything as a football player. He was mature at 17. I remember I told him the day before his debut for England that he was going to start he just said 'OK' like it was normal. It was not normal at 17."

How will Rooney be remembered?

Rooney's England record is in the books and cannot be erased - but he may just fall short of the status of "great" afforded to Sir Bobby Charlton, whose goals record he broke for Manchester United and his country.

Charlton has an accolade shared by only 11 Englishmen, a World Cup winners' medal, while Rooney was perhaps a victim of his own stunning early success.

But he will be recalled, certainly by those who have followed the England camp closely throughout his international career, as someone who was endlessly committed to his country.

He was always the consummate team player, always willing to sacrifice his own needs and personal preferences if he thought it would achieve the desired result. As an example, he willingly shifted to the left-flank, unfamiliar territory, to accommodate the shock inclusion of Raheem Sterling against Italy in Manaus at the 2014 World Cup.

Whenever the case was made for his exclusion, as it occasionally was, the counter-argument posed was whether England would be a better team without him. The answer was rarely yes.

England team-mates spoke with almost unanimous respect for his presence inside the dressing room and on the field. He was, in dressing room parlance, a player's player.

Rooney's work-rate was prodigious, often leading to him appearing in areas of the pitch where he was not at his most effective, but it was always done with the best of intentions, fuelled by an unquenchable desire to win - something that often caused his volatile temperament to boil over.

Throughout all the years and managerial changes, as well as starting alongside 86 different players, Rooney was always regarded by Sven-Goran Eriksson, Steve McClaren, Fabio Capello and Roy Hodgson as the key member of their team. Time ran out under Gareth Southgate as Rooney struggled at Manchester United, but even he was ready to bring him back after his early excellence for Everton.

And if respect among opposing players and managers is a measure of Rooney's stature, then it was also a running theme throughout his career that he was invariably the man they feared most in England's team.

It is perhaps a sign of his selflessness that he has decided to bow out now rather than take the opportunity to close in on the seven more England caps he needed to pass goalkeeper Peter Shilton's record tally of 125 but it appears he has listened to his body and called it a day.

Of course, it is impossible to paint a glorious unblemished canvas of his England career, with two red cards and his role in squads that failed at major tournaments, but Rooney has a record that he can be justly proud of and can take his place in the Football Association's Hall Of Fame.

What will be Rooney's England legacy? 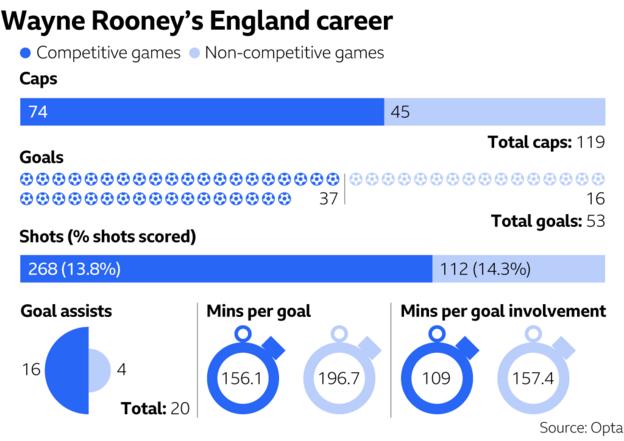 And it may well be that in time Rooney might actually come to be regarded as under-rated and under-appreciated, his career finally being put in perspective away from the initial excitement.

Rooney will hold his record for many years to come and one of those who may yet threaten it, Tottenham's Harry Kane, tweeted after his retreat from the international scene: "Wayne Rooney. An amazing player and goalscorer for England. A Three Lions Legend."

And Michael Owen, who shared those heady early days in Portugal in 2004 as Rooney's strike partner, responded to his decision with: "Brilliant timing. Always go out on top. Well done Wayne Rooney. An international career to be proud of."

Lineker, third in England's goal standings behind Rooney and Charlton, added: "England's highest ever goalscorer calls it a day. Congratulations to Wayne Rooney on a magnificent international career. A player's player."

Indeed, it was Lineker who described Rooney as "under-appreciated" after he scored in Everton's 1-1 draw at Manchester City on Monday, stating: "He'd be one of Britain's top 10 ever. He's had a marvellous career."

Neville now hopes the FA can let Rooney take one final England post-retirement bow when they face Slovakia at Wembley, saying: "I hope they get Wayne down to Wembley next Monday and he can stand on Wembley with England for the last time, the fans can applaud him, cheer him, thank him.

"He can thank them and he can go down to Wembley with his wife and children and have one last goodbye."

He may not have played a part in ending England's so-called 'years of hurt' and there will always be an element of 'what might have been', but Rooney deserves great admiration and respect.

He may have fallen short of the international greatness so many of us expected but he will be regarded as one of the finest players ever to represent England, a player who made history.

That alone is tribute and testimony enough.