Head coach Gordon Strachan says it is a huge boost for Scotland to have a core of players in line to feature in this season's Champions League.

His squad for World Cup qualifiers against Lithuania and Malta features six Celtic players as well as Andy Robertson of Liverpool.

Both clubs are well placed to qualify for the group stage.

"It's great for players to learn how to deal with big matches, atmospheres, how to travel," said Strachan.

"If you go back 10 years when Celtic and Rangers were playing regularly in Europe and sending about 10 players to the squad, it makes a huge difference."

Robertson, 23, made his league debut for Liverpool at the weekend and Strachan is sure the left-back will thrive at Anfield.

"If he starts playing any better than he has been for us, he'll be some player," he said.

"He'll get better experience that's for sure. At Hull, he's desperate not to get beaten, but at Liverpool they have to win every game, so that's a change of mindset."

Strachan admitted he will have to scrutinise the fitness of a number of players in the squad, including Robert Snodgrass, who are either carrying knocks or not featuring regularly for their clubs.

"We've made the squad a wee bit larger and we'll keep and eye on the ones that haven't been playing," he explained before revealing Callum McGregor was "close" to taking the Celtic contingent to seven.

"There's a lot that were close. But, if you look at that midfield, there are a lot of good players in there and players who have done very well for us over the last three or four years," he said.

Scotland, who lie fourth in Group F, face Lithuania in Vilnius on 1 September and then host Malta three days later at Hampden Park.

"We've got to try and win both games," said Strachan.

"I don't think we ever set out to draw a game. We set out to win, that's for sure, whether it's Germany away, which was a magnificent performance, or away to England.

"We don't have the physical capabilities to sit back and take long periods of being under pressure. We're not the biggest side in the world.

"Physical presence is a huge thing in football these days."

Strachan suggested he may stick with three central defenders for the artificial surface in Vilnius against a team who earned a 1-1 draw in Glasgow last October.

"They have a club mentality," he said. "They're like a good, steady handicap golfer - hard to beat.

"They play a system very similar to how we played a couple of years ago, so we know it well.

"But we know by now there are no pushovers in this group." 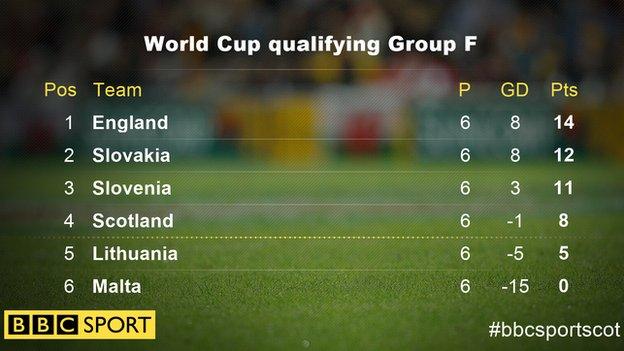 Scotland's most recent outing was a 2-2 draw at home to England in June, with Harry Kane scoring a stoppage-time equaliser for the group-leading visitors who defeated Strachan's side 3-0 in Glasgow.

"The performance was not one of our best. But, for guts and determination, it was different class," Strachan reflected.

"We had better opportunities in the game at Wembley. That's how strange football can be.

"But the attitude never changes with this squad. It's a regular bunch. Why? Because you can trust them.

"They understand what it's all about and they respect each other."