Arsenal defender Shkodran Mustafi, 25, could leave the club, with Inter Milan interested in signing the Germany international, who is valued at £35m. (Daily Star)

Hull City midfielder Sam Clucas, 26, is close to a move to Swansea City, with Tigers boss Leonid Slutsky saying the player was "preparing to play for another club". (Hull Daily Mail)

City officials have met Messi's representatives to discuss the possibility of a move for the 30-year-old Argentine to the Etihad. (Daily Record)

Arsenal have offered winger Alex Oxlade-Chamberlain, 24, a four-year contract worth £125,000 a week to fend off interest from Chelsea.(Daily Star)

Barcelona captain Andres Iniesta, 33, whose contract expires next summer, has hinted that it is not certain he will stay at the club. (El Pais, via Daily Mail)

Who is in your team of the week?

Pogba? Lukaku? Morata? Who is in Garth Crook's team of the week - and who would you select?

Garth's team of the week

The La Liga side are set to pay the £36m release clause of Nice midfielder Jean Michael Seri, 26, with hopes of playing him alongside Liverpool's Philippe Coutinho, 25, next season. (Mundo Deportivo, via Daily Mail)

Chelsea and AC Milan have been put on alert after Borussia Dortmund striker Pierre-Emerick Aubameyang, 28, said he needs to leave the club if he is to grow. (Radio Montecarlo Italy, via Sun)

Crystal Palace manager Frank de Boer says Liverpool centre-back Mamadou Sakho, 27, is much too expensive for him to sign. (Guardian)

West Brom manager Tony Pulis must decide whether he wants to spend £15m on Tottenham defender Kevin Wimmer, 24, after the club sanctioned the deal. (Birmingham Mail)

The Swede was released by United in the summer after suffering a knee ligament injury last season, but his latest fitness update shows he is fighting fit. (Twitter)

Arsenal manager Arsene Wenger says he must sell before he can buy and admits the club "have too many players". (Independent)

Leicester City players have told 26-year-old winger Riyad Mahrez, who is seeking a move away from the club, to stay at the King Power Stadium. (Leicester Mercury) 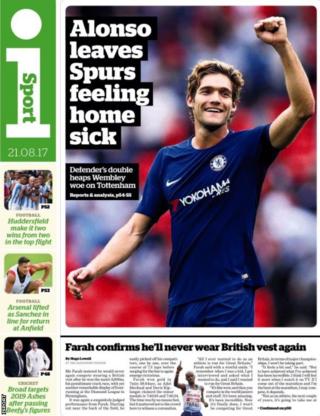 Referee Lee Mason's performance in Southampton's 3-2 win over West Ham has been criticised by ex-referees' chief Keith Hackett. "He struggled and I've questioned his ability before to look comfortable and control a Premier League game," said Hackett. (Daily Telegraph)

Bournemouth striker Jermain Defoe, 34, is angry at being left out of the starting line-up for the first two Premier League games. (Daily Mirror)

Tottenham have been accused of creating an 'artificial' atmosphere inside Wembley as they played a drum beat over the PA system against Chelsea on Sunday. (Daily Telegraph)

Manchester City's left-back Benjamin Mendy sent his commiserations to Chelsea striker Michy Batshuayi on his "bulletheader" in the Blues victory over Spurs...

And Batshuayi was just thankful for Marcos Alonso's left foot...

Atletico Madrid are prepared to offer up to £50m for Chelsea's 28-year-old striker Diego Costa. (Mail on Sunday)

Costa has turned down loan offers from Shanghai SIPG and Tianjin Quanjian that would have earned him £13m between now and November. (Sun on Sunday)