Costa has turned down loan offers from Shanghai SIPG and Tianjin Quanjian that would have earned him £13m between now and November. (Sun)

Barcelona have told Liverpool they have until Sunday to accept their £118m bid for 25-year-old attacking midfielder Philippe Coutinho, or the offer will be withdrawn. (Times - subscription required)

The Spanish club have made signing Coutinho their number one priority. They are working to reach an agreement with Liverpool, and the Brazil international believes he will eventually leave. (Sport - in Spanish)

Barca will improve their bid for Coutinho to £130m, although they will have to offer more than a guaranteed £80m before add-ons to tempt Liverpool, who value the player at £140m. (Express)

Burnley are closing in on the club record £15m signing of Leeds United striker Chris Wood, 25, with a deal to be completed by Monday. (Lancashire Telegraph)

Crystal Palace manager Frank de Boer is targeting several more signings. But he does not want to bring back defender Mamadou Sakho, 27, from Liverpool, and winger Andros Townsend, 26, could be sold. (Daily Mail)

Real Madrid have rejected a 75m euro (£68.5m) bid from Juventus for their 23-year-old midfielder Mateo Kovacic, (AS) 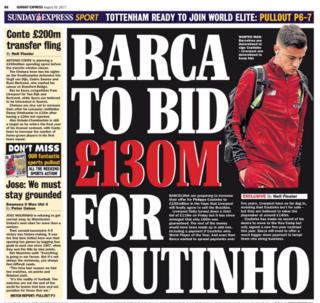 Twelve-year-old forward Youssoufa Moukoko has scored eight goals in three games for Borussia Dortmund's under-17 side this season. (ESPN)

Diego Costa is refusing to return to Chelsea to clear out his locker, and has told team-mates they are welcome to take what they like. (Sun)

Barcelona's latest £119m offer for Liverpool playmaker Philippe Coutinho, 25, was made up of a guaranteed £80m with rest for the Brazilian reaching targets, including winning multiple trophies and the Ballon d'Or. (Mirror)

West Ham are becoming frustrated in their attempts to sign 25-year-old Portugal midfielder William Carvalho from Sporting Lisbon, with the clubs £5.5m apart in their valuations. (Telegraph)