Tottenham are closing in on the signing of Ajax's 21-year-old centre-back Davinson Sanchez. (Telegraph)

Colombian Sanchez will cost Spurs £28m up front with a potential further £14m to come in add-ons. (Independent)

Manchester City are ready to offer West Brom £22m for their 29-year-old captain Jonny Evans after having an £18m bid rejected. City are prepared to almost double the Northern Ireland defender's £75,000 a week wages. (Mirror)

Barca will "fight" to sign Brazil international Coutinho up until the transfer window closes, with the growing expectation that they will soon submit a new offer. (Telegraph)

Chelsea striker Diego Costa, 28, says he will not return to Stamford Bridge and intends to rejoin Atletico Madrid. (Telegraph)

Spurs defender Kevin Wimmer, 24, is in talks with West Brom over a £15m move. (Telegraph)

PSG midfielder Blaise Matuidi, 30, has completed a medical at Juventus but the two clubs are yet to agree on how any transfer fee will be paid. PSG boss Unai Emery did not want to sell the player. (Le Parisien - in French)

Borussia Dortmund's chief executive says Barcelona are "not even close" to meeting their valuation of 20-year-old France forward Ousmane Dembele. (Kicker - in German)

Fiorentina have told their 29-year-old Croatia striker Nikola Kalinic, a target for AC Milan, that he will be fined after failing to report for training on Thursday. (Sun)

Sunderland risk losing record signing Didier Ndong, 23, as Lyon could make an offer for the midfielder if they miss out on Celta Vigo's Pape Cheikh Diop. (Daily Star)

Southampton are closing in on the signing of Dutch defender Wesley Hoedt, 23, fromLazio after making a £15m bid. (Daily Mail)

Manchester United have not given up hope of signing winger Ivan Perisic, 28, despite only offering £39m to Inter Milan. (Mirror)

Barcelona forward Lionel Messi posted on Instagram: "I want to send condolences and all my support to the families and friends of the victims of the terrible attack on our beloved Barcelona. We want to live in a world of peace, without hate and where people live together in respect and tolerance. We are more than them, and we're not going to give in."

Gerard Pique: We are more united than ever before in opposition to the attack in our city. All my support to those affected by this barbaric act.

Espanyol FC - in Catalan: With our heart still shaken at seeing our beloved Barcelona plagued by terror and hatred, we want to show solidarity with all the people affected. Only together will we win the battle against horror.

There will be almost 20,000 empty seats for Tottenham first league game at Wembley because of restrictions imposed by Brent council and the Metropolitan Police. (Times - subscription required)

The Premier League's new campaign against illegal streaming led to 600 streams being blocked on the opening weekend of the season. (Times - subscription required)

Former Barcelona, Manchester United and Middlesbrough keeper Victor Valdes, 35, has retired from football and is to set up his own TV production company. (Mundo Deportivo - in Spanish) 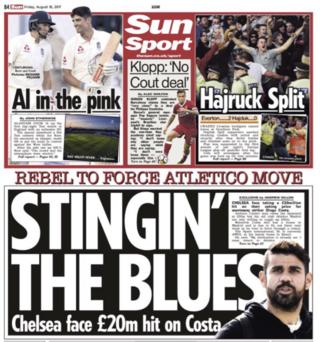 The Sun back page on Friday

Tottenham are not expected to entertain offers from Chelsea for full-back Danny Rose, 27, with the Blues ready to double his salary. (Evening Standard)

Manchester United are no longer interested in signing Rose, although the England international is desperate for a move to Old Trafford. (Daily Star)

Daniel Levy, the Tottenham chairman, says midfielder Dele Alli, 21, would not be sold even for £150m, with Barcelona and Manchester City both interested. (Sun)

Chelsea have not given up on signing Alex Sandro, 26, from Juventus, but are relying on the Brazilian left-back handing in a transfer request. (Evening Standard)