Hibernian manager Neil Lennon has described a statement by a Rangers' fans group criticising his actions as "laughable and insignificant".

Club 1872, the second largest shareholder in Rangers, claimed Lennon made "various inflammatory gestures" to fans during Hibs' 3-2 win at Ibrox.

Police Scotland said no action would be taken against the Hibs manager.

Lennon said he had not heard of the fans' group and thought the statement had been "written by a 15-year-old".

Police ruled out action after receiving complaints from Rangers fans about the former Celtic player and manager's celebrations at Ibrox on Saturday.

'Poorly overlooked by the mainstream media'

The Easter Road boss cupped his ears and made a gesture as he celebrated Simon Murray's first-half equaliser.

"The fallout isn't my fault, the fallout is driven by yourselves [the media]," Lennon said. "I gave an answer to the question on Saturday after the press conference and said I celebrated the goal and that should be the end of it. 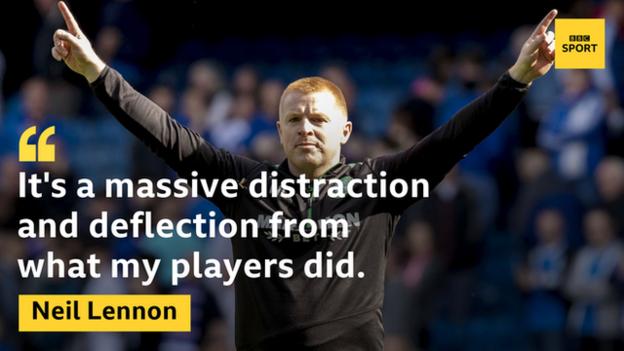 Responding to Club 1872's statement, Lennon said: "I've never heard of them. It looks like it was written by a 15-year-old - I was aware of it but I don't need to comment on it.

"We won the game. It's a massive distraction and deflection from what my players did and the way we set the team out and the football that we played.

"So, if it wasn't me it was the referee, which is fine, because people can comment on how they see the game afterwards.

"They're entitled to their opinion. But from my point of view, we went to Ibrox, in a really hostile environment, stood up to the challenge and came away with a fantastic three points.

"That's been poorly overlooked by the mainstream media."

The Hibs boss added: "Why is it front-page news? There's so much more going on in Scotland and around the world. There I find myself on Monday, on front-page news celebrating a goal. It's disproportionate."

'Draw a line under it'

Lennon is relieved that police decided to take no action and expects the Scottish Football Association compliance officer Tony McGlennan to follow suit.

"As I said at the time, I didn't think I had any case to answer to and thankfully the police have seen that as well," he added.

"I expect that to be the case (with the SFA) and we draw a line under it. I didn't think my behaviour was over the top at all. Why I am being criticised for that, I don't know.

"I can cite a lot of people for what they do but I don't, I get on with it. I try to do with a bit of humour but people lose their sense of humour when they concede a goal against my teams."