Tottenham are not expected to entertain offers from Chelsea for full-back Danny Rose, 27, with the Blues ready to double his salary. (Evening Standard)

Manchester United are no longer interested in signing Rose, although the England international is desperate for a move to Old Trafford. (Daily Star)

Daniel Levy, the Tottenham chairman, says midfielder Dele Alli, 21, would not be sold even for £150m, with Barcelona and Manchester City both interested. (Sun)

Chelsea have not given up on signing Alex Sandro, 26, from Juventus, but are relying on the Brazilian left-back handing in a transfer request. (Evening Standard)

The Blues have made a new £73m bid for Sandro, but Juventus have rejected the offer. (Calciomercato, via Daily Star)

Antonio Conte's side are to offer £25m plus add-ons for Leicester midfielder Danny Drinkwater, 27, but the Foxes want £40m for the player. (Daily Mail)

Barcelona are a step closer to securing a deal for Ousmane Dembele, 20, from Borussia Dortmund after the French forward was pictured packing his bags. (Daily Express)

Manchester City have made a £60m bid for Arsenal forward Alexis Sanchez, with Real Madrid also interested in the 28-year-old Chilean. (Don Balon, via Daily Star)

Arsenal have already rejected a £45m bid from City for Sanchez, according to the player's agent Fernando Felicevich. (El Mercurio, via Daily Express)

Arsene Wenger, the Arsenal manager, has told Alex Oxlade-Chamberlain, 24, that he wants him to stay for "a long time", with Chelsea, Liverpool and Manchester United interested in the England winger. (Sun)

Wenger has admitted Sanchez and Oxlade-Chamberlain could both be sold this summer. (Daily Star)

Championship side Aston Villa, who are in the relegation zone, are interested in signing Gunners midfielder Jack Wilshere, 25. (Daily Mail)

Southampton are closing in on a £15.4m move for Lazio's Dutch defender Wesley Hoedt, 23. (Daily Mirror)

Everton Ronald Koeman says the club still has business to do before the transfer window closes, despite breaking their transfer record to sign £45m Gylfi Sigurdsson from Swansea. (Guardian)

Manchester United are ready to offer striker Zlatan Ibrahimovic, 35, a coaching role as part of their move to re-sign him. (Independent)

Tottenham are lining up a £27m bid for Barcelona midfielder Denis Suarez. The 23-year-old Spaniard looked to be heading to Italian side Napoli. (Mundo Deportivo, via Metro)

Chelsea pulled out of a deal for Paris St-Germain's Polish midfielder Grzegorz Krychowiak, 27, because PSG were too busy handling the arrival of Neymar from Barcelona. (L'Equipe, via Daily Express)

Juventus have agreed a £18.2m fee for PSG midfielder Blaise Matuidi, 30. The Frenchman will become the Serie A club's 10th summer signing. (Guardian)

Brazilian defender Gabriel is set to join Valencia from Arsenal in a £10m deal. Gabriel, 26, joined the Gunners for £15m in January 2015. (Daily Mirror)

The Clarets have been quoted £20m to sign midfielder Sam Clucas, 26, from Hull having already had a £10m bid rejected for the player. (The Sun)

West Brom have no intention of selling Nacer Chadli, but are lining up a replacement in case Swansea make an offer too good to refuse for the 28-year-old Belgian winger. (Birmingham Mail) 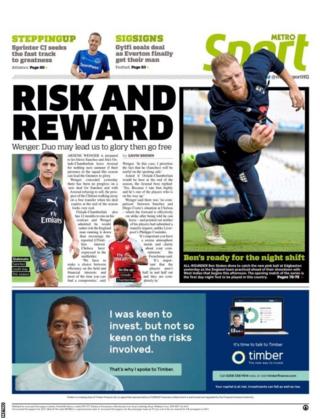 Thursday's Metro back page focuses on the futures of Alexis Sanchez and Alex Oxlade-Chamberlain...

Diego Costa could be sued by Chelsea if he ignores their requests to return to training. (Daily Telegraph)

Manchester United are among a number of clubs to have expressed reservations about a proposal to close the transfer window before the start of the season. (Daily Telegraph)

Former Juventus and Ajax midfielder Edgar Davids has successfully sued a gaming franchise after one of their characters resembled the Dutchman. (Daily Mail)

A photo of Southampton defender Virgil van Dijk in London was posted on Instagram, only to be deleted soon after. The 26-year-old has been linked with Chelsea. (Daily Mirror)

Tottenham boss Mauricio Pochettino has sent a letter (with marriage advice) to a lifelong Spurs fan before his wedding day. (Daily Mail)

Former England and Liverpool defender Jamie Carragher has revealed on Twitter that he has been asked to go on reality television show 'I'm A Celebrity… Get Me Out of Here!' ...

Chelsea are lining up a £50m move to sign Tottenham Hotspur and England full-back Danny Rose, 27, after the player angered Spurs by criticising the club's transfer and wage policies. (Sun)

Spurs have reached an agreement with Paris St-Germain defender Serge Aurier, 24, who was a target for Manchester United. (L'Equipe, via IB Times)

Arsenal manager Arsene Wenger says the club will resist any bids for forward Alexis Sanchez, 28, and Oxlade-Chamberlain and expects them to honour the final year of their contracts. (Daily Mirror)

Gunners and England midfielder Jack Wilshere, 25, is wanted by Championship side Aston Villa. Wilshere has one year left on his Arsenal contract. (Daily Mail)