But the ex-Wales defender says Swansea are standing still and fears for their Premier League status without the Iceland international.

"It's a massive loss for Swansea but great news for Evertonians," he said.

"Swansea need to look at themselves and start spending. If they want to maintain Premier League status they have to bring in quality players."

Everton completed the club-record signing of midfielder Sigurdsson for a fee believed to be about £45m, leaving Swansea with the prospect of replacing last season's star performer.

'The same problems as last year'

Ratcliffe thinks Swansea are stagnating while their rivals improve.

"I fear [for them] if they don't strengthen. The season has started," he told BBC Wales Sport.

"Why haven't they brought players in for the start of the season?

"They need to pick up points quickly to get that feel-good factor. At the start of last season there were too many negative things coming out of Swansea and they did struggle.

"It's exactly the same this year.

"All that is coming out of the club at the moment is very negative. There are no signings, people are leaving. They have generated almost £50m in transfer revenue plus whatever they have got from the Premier League which they haven't used.

"They have to up the ante and start shaping up a bit if they want to stay in the Premier League.

"I think they need five or six extra players if they want to give themselves a chance of Premier League football.

"Surely it was a wake up call last year.

"The one thing you can't do in this day and age is stand still and I think Swansea are standing still." 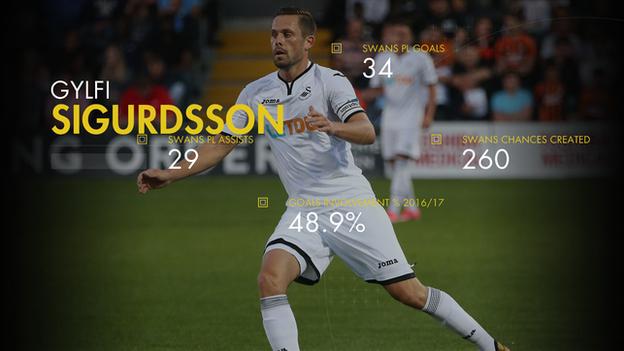 'He will fit the bill there'

Ratcliffe, who captained Everton to the League title twice, has no doubt his former club have made a good acquisition.

"I think Sigurdsson's a great signing," he said.

"Although £45m people are saying is a lot of money for a midfielder, he is a goalscoring midfielder and I think he will fit the bill there."