Former Celtic and Scotland captain Stephen McManus has retired from playing to take up a coaching role at Motherwell's youth academy.

The 34-year-old defender has been at Fir Park since 2013, but has played only once this season.

"When you retire from playing, you do so with a heavy heart," McManus told Motherwell's website.

"However, I believe this is the right time for me, with this opportunity in a new era for academies in Scotland."

McManus was a youth player at Celtic before breaking into the first-team squad and playing more than 200 games for the club, winning three Premiership titles, two Scottish Cups and two League Cups.

The centre-back played in England for Middlesbrough and Bristol City before his return to Scotland with Motherwell.

McManus played 27 times for the national time and scored twice, including the dramatic late winner against Liechtenstein during the Euro 2012 qualifying campaign.

He became a mainstay of the Motherwell defence under Stuart McCall, Ian Baraclough and Mark McGhee, until injury ended his campaign prematurely last season, leading to a double operation.

McManus returned during pre-season training, but only featured against Edinburgh City in the Scottish League Cup, playing the full 90 minutes for the last of his 156 appearances for the club.

He will now take up a role with the academy, as Motherwell prepare their youth set-up to comply with the Scottish Football Association's Project Brave initiative.

"I am very excited to be learning from the great coaching staff we have at Motherwell at the moment; that was the main attraction for me. I want to develop as a coach and this is a wonderful opportunity," McManus said.

"I want to thank the fans of every club I've played for, particularly at Well where I've enjoyed myself tremendously over the past five seasons. I now look forward to the next chapter in my career."

McManus follows former club captain Keith Lasley in moving into coaching, with the midfielder having retired from playing during the summer to take up a role as assistant manager to Stephen Robinson.

The Motherwell manager believes that McManus's experience will help the development of the club's younger players.

"We are absolutely delighted to be bringing someone like Stephen on to our staff as he will be a huge asset to the club," Robinson said.

"He's a former Celtic and Scotland captain and has played almost 500 career games; that's a wealth of experience that our younger players now have at their disposal.

"It was a massive decision for him personally and it's a real testament to Stephen as a guy that he wants to make this step at this stage of his life.

"I believe he'll make a tremendous coach one day and he's doing it in the correct way, getting his badges and doing the hard work on the training ground first." 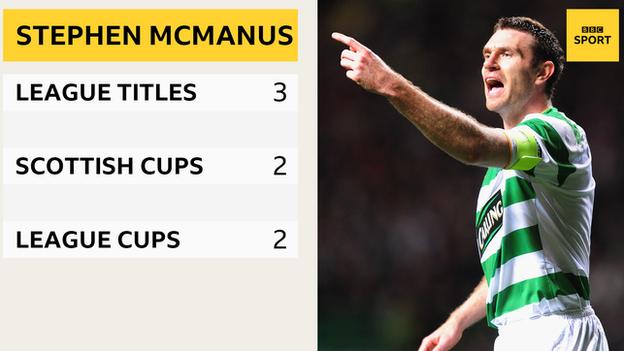