Substitute Hal Robson-Kanu scored the winner and was later sent off as West Brom made it two wins from two with victory at Burnley.

The match was short on entertainment until Robson-Kanu gave it a shot of adrenaline with a brilliant strike. The Wales international, who came on seven minutes earlier, pounced on a Matt Phillips flick, held off two challenges and fired in low past keeper Tom Heaton.

However, the 28-year-old striker did not see out the rest of the match as he was shown a red card in the 83rd minute for catching Matt Lowton with his elbow.

Burnley wasted chances at the other end, and will be hoping Leeds striker Chris Wood, who they look likely to sign, will be less profligate.

Ben Mee had the Clarets' best chance but missed with a two-yard header, and team-mate Johann Berg Gudmundsson also went close with a low curling shot.

It was a brief, yet eventful appearance by Robson-Kanu.

His goal was brilliant, and will rank alongside the strikes against Southampton last season and his Euro 2016 effort against Belgium.

I've not looked at the red card incident. I don't want to say things that will get me in trouble.

This one was about perseverance. The forward, with the ball in possession, battled past Gudmundsson and James Tarkowski before striking past Heaton.

He led the line well after the goal, but then showed a bit too much aggression as he challenged Lowton for the ball right in front of referee Martin Atkinson.

There were few complaints from both Robson-Kanu and his team-mates.

West Brom manager Tony Pulis will have been delighted with his side's display, particularly at the back.

The visitors restricted Burnley to largely half-chances, with six of the 15 efforts on goal falling to Jeff Hendrick.

The Republic of Ireland midfielder had one angled strike in the area superbly blocked and was rushed by the Baggies backline into producing inaccurate shots.

Iceland international Gudmundsson was unlucky to see his excellent low curling shot drift wide, but his team-mates Mee and Jon Walters will not want to see a replay of their golden heading chances.

West Brom boss Tony Pulis: "It is a great start for us, especially with two clean sheets.

"I've not looked at the red card incident. I don't want to say things that will get me in trouble. The decisions stands. I am so pleased we got through that final 15 minutes with 10 men. There is good spirit in the dressing room and we needed that today. Our fitness level were fantastic."

On Jonny Evans and reported interest from Manchester City: "They all deal through the football club, I won't get involved in that."

Burnley boss Sean Dyche: "The game is unfair sometimes and today I thought it was. We gave a very good performance, we created enough to get something from the game.

"I have been very pleased. It is a tough one today because I was not happy with the result but I was happy with the performance. We are laying down some good markers for how we want to play and where we want to be."

On link with Leeds striker Chris Wood: "We've been linked with lots of players. We will watch this space and see what comes. We are still in the market, still looking at different options."

Man of the match - Ahmed Hegazi 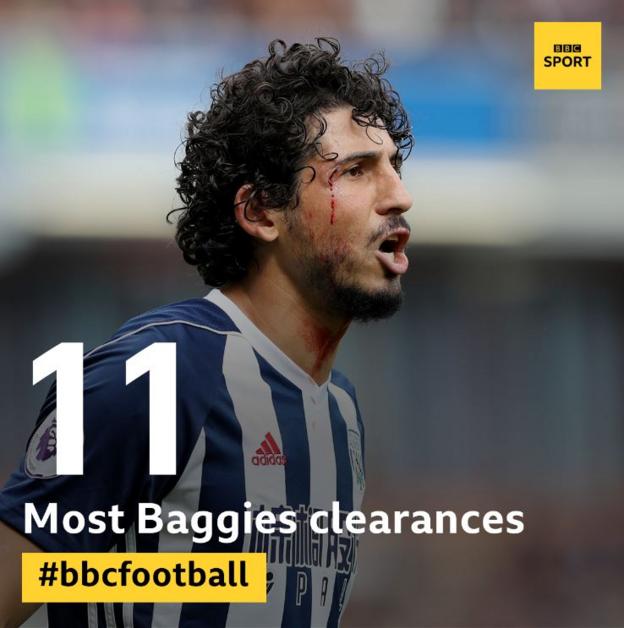 West Brom's Ahmed Hegazi was a man-mountain at the back for the Baggies. The on-loan Egyptian needed treatment from a bad cut early in the match but soldiered on, making vital clearances for his side.

'One-nil to the Albion'

After the Lancashire derby against Blackburn in the EFL Cup on Wednesday, the Clarets are at Tottenham next Sunday (16:00 BST).

The Baggies are at Accrington on Tuesday in the EFL Cup before they host Stoke next Sunday (13:30 BST).

Shots on Target
Home0
Away1