League One side Blackburn host Premier League rivals Burnley in a Lancashire derby, with the draw regionalised.

Newcastle will host Nottingham Forest, with Bournemouth away to Birmingham, among six ties with Premier League sides facing Championship opposition.

The draw initially left several sides unsure whether they were home or away.

The second-round ties will be played in the week commencing Monday, 21 August.

The seven Premier League teams involved in European competition will enter at round three.

Amid confusion during the live broadcast, four second-round matches were announced with the incorrect team away from home.

The ties involving seeded sides Brentford, Crystal Palace, Watford and Norwich City were initially read out with the seeded team at the opposite venue.

West Ham and Newport County were guaranteed away games regardless of how they were drawn, owing to being unable to play at their home grounds.

The Hammers - whose London Stadium home is being used for the World Athletics Championships - will visit League Two team Cheltenham, while Newport - whose pitch is being relaid - travel to Leeds.

Confusion also reigned in the first-round draw in June, which was streamed live from Bangkok, as Charlton were included twice on a graphic listing the fixtures, while AFC Wimbledon were also wrongly recorded as being at home to Swindon in that round.

*These ties were initially announced with the other team at home

**West Ham and Newport County would not play at home, as per a pre-draw agreement

'At least you've only got one game this time' 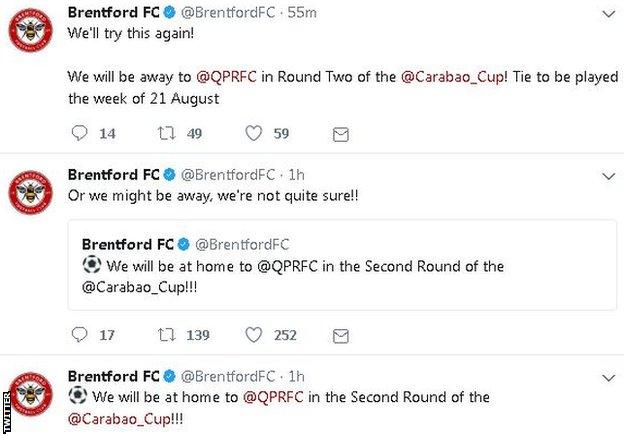 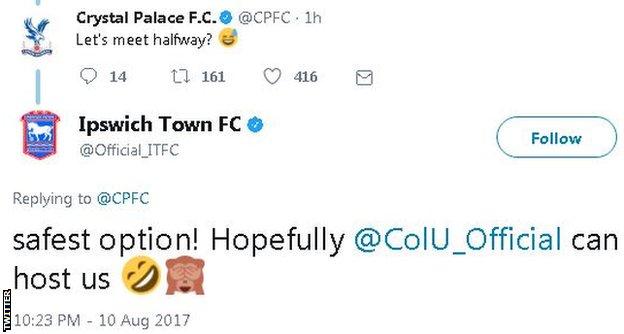