Alan Shearer joins Gary Lineker and Ian Wright on Match of the Day at 22:30 BST on Saturday night on BBC One and the BBC Sport website for highlights of eight Premier League games.

I am expecting a lot of transfer activity from last season's top six before the window shuts at the end of August but, as things stands, I would say the title is between the Manchester clubs.

Manchester City hired Pep Guardiola to win the Champions League and the Premier League and, despite spending a lot of money, his first year in England was a big disappointment.

Guardiola has spent a fortune on full-backs and a new goalkeeper to try to rectify some of the defensive issues City had in the first trophyless campaign of his managerial career and, if he fails again, there are no more excuses for him.

I think City will be there or thereabouts but, at the moment, I would go with Manchester United - just - to be champions.

'Lukaku is only going to get better at United'

Whatever you think of United manager Jose Mourinho, he won two trophies last season and got them back into the Champions League, and he has strengthened them again significantly this summer.

By buying Romelu Lukaku from Everton, United have signed a centre-forward who, at the age of 24, should be coming into his prime.

Lukaku has scored on a regular basis in the Premier League for the past five seasons, for West Brom and Everton.

He is only going to get better and, if United give him the amount of chances you would expect them to, he will score a lot of goals for them too. 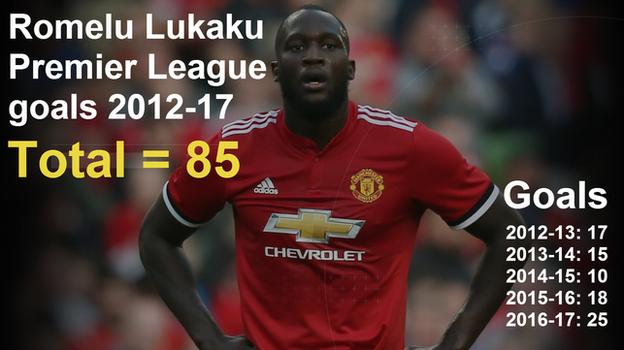 Nemanja Matic is another excellent signing. I was amazed Chelsea let him join one of their rivals, a team that are trying to catch them up.

From what he has been saying this week, Blues boss Antonio Conte was surprised it was allowed to happen too - especially because Tiemoue Bakayoko is still not fit.

I know Matic is 29 and cost £40m, but he has got at least another two or three good years left in him, and he is exactly what United needed in midfield.

Having him in the team will give Paul Pogba more freedom to get forward and I am expecting to see an improvement from him.

We will see more from Henrikh Mkhitaryan and Marcus Rashford too.

We will have to wait and see whether Rashford gets the chance to lead the line or has to play to one side of Lukaku, but this should still be a big season for him before next summer's World Cup.

And then there is Mourinho himself. More often than not, he finds a way to win, which is another reason I make United slight favourites.

In Lukaku, Matic and centre-half Victor Lindelof, he has bought three more players to turn United into the team he wants them to be, and he is not finished yet - I think he is after one or two more this month as well.

'The more Stones plays with Kompany, the better he will become'

The big question marks over City are how will they do defensively and, as part of that, can they keep Vincent Kompany fit?

John Stones will have to do a lot better because, for a £47.5m centre-half, he had a pretty poor start to his time at City.

He made some mistakes but even when he had a good game he was in and out of the team. It was a really stop-start season for him and I did not think he ever really got going.

He is a year older now and he will have learned from those experiences, but to make progress he has to form a proper partnership at the back and, the more he plays with Kompany, the better he will become.

They only started two league games together in 2016-17, when it would have done Stones a lot of good to have his captain alongside him.

'Not signing anyone would be a huge error by Spurs'

Chelsea are the defending champions and when you go through their strongest XI, they are still as good as anyone else.

But their issue is they need more players because they have Champions League football to deal with this season too.

They have let a lot of squad players go, so even after signing Bakayoko, Antonio Rudiger and Alvaro Morata as like-for-like replacements for Matic, John Terry and Diego Costa, who looks like leaving too, they are still down numbers-wise.

Chelsea have to go out and make two or three signings in the next couple of weeks, and Tottenham are in the same boat because they also need to bolster their squad.

Having to play at Wembley already makes things more difficult for Mauricio Pochettino's side, because the opposition will raise their game there.

Spurs have just fallen short in the league in the past couple of seasons and not signing anyone to try to push on now would be a huge error on their part.

Spurs are at the stage where they will need to start winning things soon if they want to keep hold of their best players. It really needs to happen for them this season.

Coutinho and Sanchez - staying or going?

The Premier League season always starts before the summer transfer window shuts but, this year in particular, it feels like some big deals could be done that would change things at the top of the table.

Two of them involve Liverpool. Firstly, will Philippe Coutinho go to Barcelona? If he leaves Anfield, Liverpool can forget about challenging for the title.

On the other hand, the Reds want Southampton defender Virgil van Dijk and, if they were to get him and keep Coutinho, they will not be too far away.

Alexis Sanchez's future at Arsenal has not been resolved yet either and there still seems to be a lot of uncertainty around the Gunners, even after Arsene Wenger signed a new two-year contract.

At the moment they have got Sanchez, Mesut Ozil and Alex Oxlade-Chamberlain all entering the final year of their contracts. My guess is that is about £100m of talent at least.

If all three leave for free in 12 months' time, you miss out on that money and also have to splash out on replacing them.

Altogether we are talking about the best part of £200m and, I don't care how rich their owner Stan Kroenke is, that is still a heck of a lot of money whether you are a billionaire or not.

I liked the look of Alexandre Lacazette's link-up play in the Community Shield and he adds something different to the Gunners' attack but, at the moment, it does not seem that much else about Arsenal has changed.

Even if they keep all three of those players for this season, I still don't see them having enough to challenge for the title.

My old team Newcastle are back in the Premier League and, for them, this season is all about staying there.

Magpies boss Rafael Benitez has already said as much - I spoke to him this week for Football Focus and he was open and honest about their situation and how it will be a battle to stay up.

Benitez compared what Newcastle have spent - which is about £30m on four players - to the £20m or £25m that Bournemouth and Leicester have paid for just one.

That shows where Newcastle are at, and what they are up against. They have not been able to get in the players they want and he is slightly frustrated.

It will be difficult for them but it is a huge boost that Benitez says he is staying. With him in charge, they will be tough to beat and they have a chance.

I know he is trying to get more players in before the window shuts. If they can get two or three, they might just have enough to stay up.

Why the Premier League is the best in the world

It is 25 years since the Premier League began and, when you consider where it is now - what has changed and by how much - then the difference is staggering.

When you look at everything from transfer fees to the stadiums the teams play in, it is just incredible.

In 1996, when I left Blackburn to join Newcastle for a world record fee of £15m, I said that there will never be a better time to be a footballer.

How wrong I was - every year it just gets better and better.

When I'm asked how the Premier League compares to everywhere else, I always try to consider the whole package - entertainment, excitement, stadiums, the managers and the players and their ability.

So, although we might be lacking in comparison to, say, La Liga when it comes to the quality in our very top teams, if you put all of those above factors together, then the Premier League is the best.