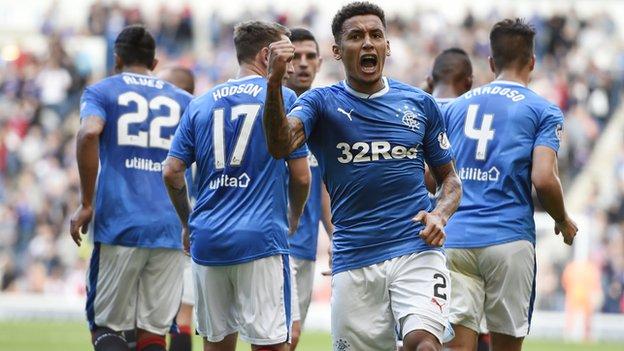 Pedro Caixinha has urged his Rangers players to continue their winning start to the season against Hibernian.

The Ibrox club opened their Premiership account with a win at Motherwell and followed that up with a 6-0 thumping of Dunfermline in the League Cup.

"It is always important to build on winning. They are believing in themselves as a team," Caixinha said ahead of Hibs' visit on Saturday.

"I am a guy who chases perfection, but when I get it I want more."

"One of the major parts of football is enjoyment," added Caixinha. "I felt freedom from the team. The early second goal helped, but the players worked hard to get it.

"It's just a good start. We want more. We want to keep progressing.

"I believe you need to be focused at all times, with a strong mentality and team spirit.

"The boys are doing well but we still have a long journey in front of us."

'Football is a moment'

Rangers and Hibs last met in the top flight in 2012, while the most recent contest came in the 2016 Scottish Cup final.

A stoppage-time header from David Gray gave Hibs a dramatic 3-2 win at Hampden but Caixinha insists he is not interested in using previous pain as a motivation.

"Football is a moment, there are no two games played the same way," he explained.

"The contest is different, what was to be fought for is totally different, so we just want to focus on the three points that we want to take, that's all.

"My concern is to prepare the team, recover the players and make them ready for a strong start at 3pm on Saturday."

Meanwhile, the Rangers manager revealed that club captain Lee Wallace will have a scan on a leg injury.

Lee Hodson was drafted in as a late replacement for Wednesday's victory over Dunfermline at Ibrox.