The wait for the 2017-18 Premier League season is almost over as Arsenal prepare to host Leicester City at Emirates Stadium at 19:45 BST - the first time the campaign has started on a Friday.

English top-flight clubs have opened their chequebooks like never before and are preparing to roll out their new signings.

There will be new kits on the pitch, some new faces in the dugouts - including a Dutch legend taking charge in south London - and several new rules to adjust to.

Armed with TV money and the riches of the Premier League, top-tier clubs have taken spending to a new level.

As of 10 August - a day before the start of the season - teams had invested £1.034bn on signings, which means the league as a whole is on course to surpass the record £1.165bn spent last summer, with three weeks of the transfer window still remaining.

Much of this is down to Manchester City's outlay. Boss Pep Guardiola has splashed out over £200m on new signings - the first time an English club has reached that figure in a single window.

Their deals include the £52m move for left-back Benjamin Mendy - a world record for a defender - from Ligue 1 champions Monaco, the capture of right-back Kyle Walker from Tottenham for an initial £45m and the £43m transfer of midfielder Bernardo Silva, again from Monaco.

Wayne Rooney's glittering career at Old Trafford came to an end as he completed a return to boyhood club Everton, who also brought in goalkeeper Jordan Pickford from Sunderland and defender Michael Keane from Burnley, both for deals that would be worth £30m, as well as £23.6m midfielder Davy Klaassen from Ajax.

Newly promoted Huddersfield Town and Brighton both broke their club records on more than one occasion as they look to survive in their maiden Premier League campaigns, while Newcastle - the other team to come up from the Championship - acquired winger Jacob Murphy from Norwich for £12m.

Tottenham, who finished second last season, have yet to bring in a single player this summer.

All bar three Premier League clubs stuck with what they had, but the most intriguing managerial appointment was ex-Ajax and Barcelona defender Frank de Boer being installed at Crystal Palace following the shock resignation of Sam Allardyce.

The revolving managerial door at St Mary's continued to turn in the summer, as former Alaves boss Mauricio Pellegrino became Southampton's fourth manager in the past four years after replacing Claude Puel.

Watford dispensed with Walter Mazzarri and replaced him with Marco Silva, who resigned as Hull City manager after being unable to save the club from relegation to the Championship. Portuguese Silva was described as "one of the most sought after head coaches" by Hornets chairman Scott Duxbury.

And having named Craig Shakespeare as caretaker manager following the dismissal of Claudio Ranieri in February, 2016 champions Leicester City confirmed him on a three-year permanent deal.

A new season brings new rules - and some are more drastic than others:

Under the new rules, passed by the governing body at its annual general meeting in May, a panel will review footage each Monday looking for cases of simulation.

Any player unanimously found guilty of diving will be given a suspension.

Pitch patterns and designs will no longer be allowed at stadiums in the Premier League.

Rules state that the playing surfaces must contain no markings other than the traditional horizontal and white lines.

Meanwhile, Tottenham will play their home games at Wembley this season - as White Hart Lane is renovated - while Brighton's Amex Stadium and Huddersfield's John Smith's Stadium will host Premier League football for the first time.

The official competition match ball will be the Nike Ordem V, described as giving "optimal touch and feel with its updated bladder".

A hi-vis version will be introduced when the clocks change from British Summer Time to Greenwich Mean Time in the autumn.

Fans travelling across the country to support their teams on the road this season will be able to take in the action from closer than ever before.

Premier League clubs have agreed to a new rule where away supporters will be seated together at all stadiums and at least one block of away fan seats will be made available pitchside.

Tickets for away fans will remain capped at £30.

Video technology will be allowed into technical areas in an effort to better protect players from the damages of concussion.

Club doctors and physios will now be able to watch replays of any injury sooner after it has happened. Previously, footage could only be reviewed in the tunnel.

The top seven already are nailed on, I don't see any surprises breaking into there. Everton will be sixth or seventh and the rest we know.

Only one team can win it. City brought Guardiola to the club to win the Premier League and the Champions League and he has to win something this year. United boss Mourinho will feel exactly the same.

As for Chelsea, I sense there is something brewing there that isn't nice. They need to get in another two or three players to have a chance of retaining title.

Guardiola has embarked on some spectacular - not to mention costly - renovation work on his defence. City's attacking riches are already in place and look for Gabriel Jesus to emerge as a Premier League superstar this season. This makes City the champions.

There has been turmoil around Stamford Bridge this summer, with Diego Costa's discontent providing the backdrop along with questions about Conte's own future before he signed an improved two-year deal. No title - but a very good shout for a cup.

Happy 25th to the Premier League 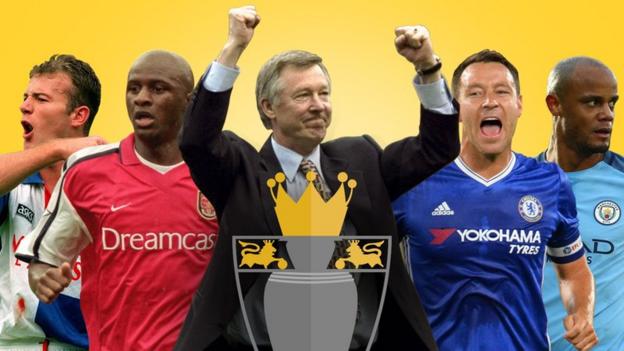 The Premier League turn 25 years old on 15 August 2017 and BBC Sport has produced five features, each covering a five-year period during the last quarter of a century of the English top flight.

'He has the force of an animal' - best quotes

Chelsea boss Antonio Conte is anticipating a battle to retain the Premier League crown. He said: "It is different in other countries where there are two clubs fighting for the title. This league has six teams that are very strong and we have to be ready to fight for this season."

Spurs are yet to do any business but full-back Danny Rose expects additions - however, "not players you have to Google and say, 'who's that?'"

Will Rafael Benitez finish the season at Newcastle? The Spaniard responded to rumours of a move to the Far East by saying: "I don't know because my Chinese is not so good."

Arsenal manager Arsene Wenger was asked about new signing Sead Kolasinac and described the Bosnia defender as having "the force of an animal". A scary proposition for Premier League forwards.

Huddersfield will not let promotion get to their heads, with boss David Wagner saying: "We will not change our idea or our identity just because we are in the Premier League. People will recognise us as Huddersfield Town." 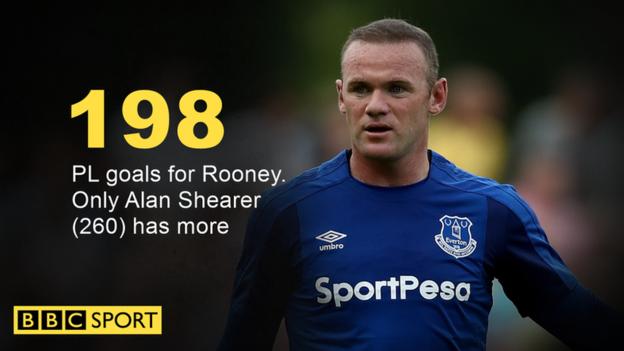 Chelsea v Burnley (15:00): The reigning champions have lost their opening match of the campaign in only one of the previous 25 Premier League seasons (Leicester v Hull last season).

Crystal Palace v Huddersfield (15:00): Eagles winger Jason Puncheon (42) was the player to have the most shots without scoring a single goal in the Premier League last season.

As ever, you will be able to follow coverage of all 380 Premier League games across the BBC this season.

Football Focus will kick off your weekends on Saturday lunchtimes and then follow the goals going in on Final Score on Saturday afternoon, both on BBC One.

The Premier League Show (on Wednesday, 16 August - then every Thursday on BBC Two) returns, while younger viewers can watch MOTD Kickabout every Friday morning on CBBC.

Missed any of the shows? Catch them again on BBC iPlayer throughout the week.

Want all the biggest sports news and analysis sent direct to your phone or tablet? Then download the BBC Sport app and sign up to football notifications.